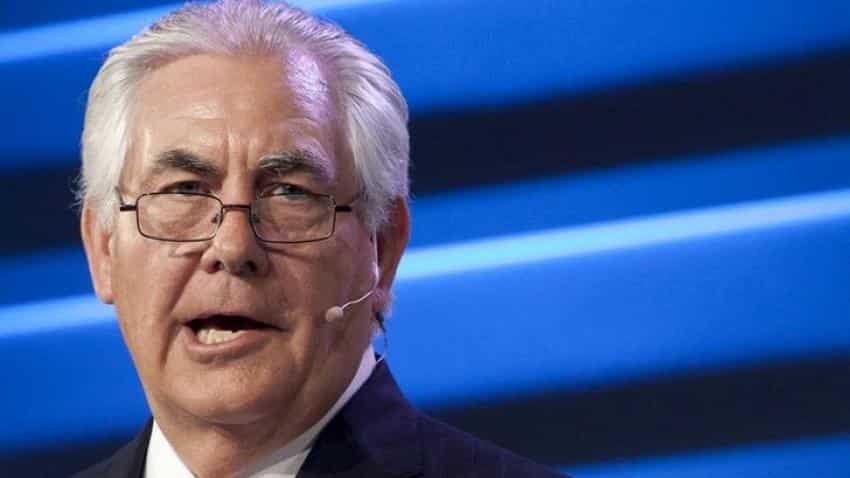 US President-elect Donald Trump is expected to name the chief executive of Exxon Mobil Corporation as the country`s top diplomat, a source familiar with the situation said on Saturday, an appointment that would put in place an official with close ties to the Russian government.

News of Rex Tillerson`s possible appointment comes as US intelligence analysts have concluded that Russia intervened in the 2016 election to help Trump win the White House.

The choice of Tillerson further stocks Trump`s cabinet and inner circle with people who favour a soft line toward Moscow.

Tillerson, 64, has driven Exxon`s expansion in Russia for decades and opposed US sanctions imposed on Russia for its seizure of Crimea.

Exxon`s Tillerson emerged on Friday as Trump`s leading candidate for US secretary of state over 2012 Republican presidential nominee Mitt Romney and three other people.

Tillerson met with Trump for more than two hours at Trump Tower on Saturday morning. It was their second meeting about the position this week.

The source, who spoke on condition of anonymity, said Tillerson was the expected pick but cautioned no formal offer had yet been made.

Trump spokesman Jason Miller said no announcement on the high-profile job was forthcoming in the immediate future.

"Transition Update: No announcements on Secretary of State until next week at the earliest. #MakeAmericaGreatAgain," he tweeted.

Trump on Saturday attended the Army-Navy football game in Baltimore, where he was joined by former New York Mayor Rudy Giuliani, who withdrew from consideration as secretary of state on Friday.

NBC News, which first reported the development, said Trump would also name John Bolton, a former US ambassador to the United Nations, as deputy secretary of state.

As Exxon`s CEO, Tillerson oversees operations in more than 50 countries, including Russia.

In 2011, Exxon signed a deal with Rosneft, Russia`s largest state-owned oil company, for joint oil exploration and production. Since then, the companies have formed 10 joint ventures for projects in Russia.

Tillerson and Rosneft chief Igor Sechin announced plans to begin drilling in the Russian Arctic for oil as part of their joint venture, in spite of US sanctions.

In July, Tillerson was one of the highest-profile US representatives at the St Petersburg International Economic Forum, one of Putin`s main investment forums, even as Washington had been taking a harder line than Europe on maintaining sanctions.

Trump has pledged to work for stronger US ties with Russia, which have been strained by Putin`s incursion into Crimea and his support for Syrian President Bashir al-Assad.

In a preview from an interview to be aired on "Fox News Sunday," Trump said Tillerson is "much more than a business executive."

"I mean, he`s a world class player," Trump said. "He`s in charge of an oil company that`s pretty much double the size of his next nearest competitor. It`s been a company that has been unbelievably managed."

"And to me, a great advantage is he knows many of the players, and he knows them well. He does massive deals in Russia," Trump said.

Tillerson`s Russian ties figure to be a factor in any Senate confirmation hearing.

ALSO READ: Big banks in US could see fat payday under Donald Trump

Senate Armed Services Committee Chairman John McCain, a long-time Putin critic, told Fox News that he does not know what Tillerson`s relationship with Putin has been, "but I`ll tell you, it is a matter of concern to me."

Democrats on the Senate Foreign Relations Committee raised concerns in a memo on Saturday citing Trump`s "cavalier dismissal" of US intelligence reports that Russia interfered in US elections and the appointment of Tillerson, who has "business ties to Russia and Vladimir Putin, and whose company worked to bury and deny climate science for years."

Should Tillerson be nominated, climate change could be another controversial issue for him. The company is under investigation by the New York Attorney General`s Office for allegedly misleading investors, regulators and the public on what it knew about global warming.

Tillerson is, however, one of the few people selected for roles in the Trump administration to believe that human activity causes climate change.

After Trump`s election, Exxon came out in support of the Paris Climate Agreement and said it favors a carbon tax as an emissions-cutting strategy.