Here’s how different sectors reacted to the Union Budget 2018

Know the reactions from industry experts on the Union Budget 2018. 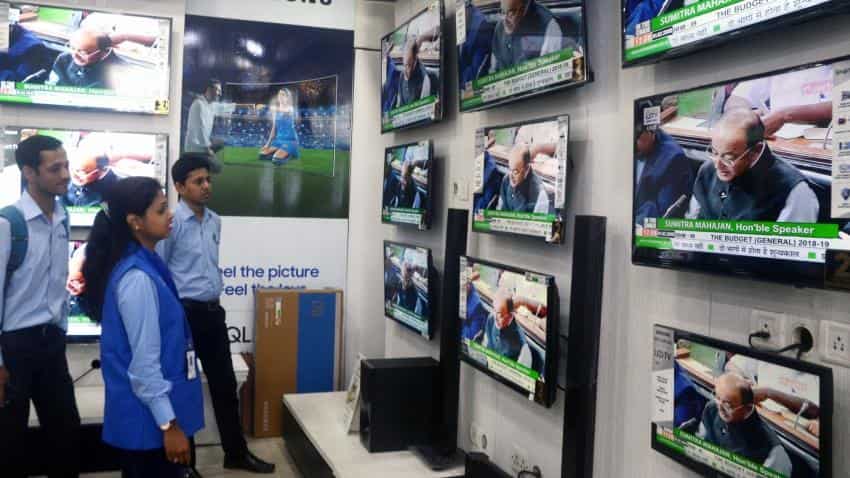 People watch the telecast of the presentation of Union Budget 2018-19 in Kolkata on Feb 1, 2018. Image Source: IANS

While many were fretting over the government not budging on income tax slabs for the average salaried class others were lauding the Union Budget on being ‘a pro agriculture and rural economy’ one.

It was a budget that garnered mixed reactions. Middle class and salaried people have expressed their ire that they were the neglected lot with no change in income tax slabs or rates.

Here’s what top honchos of India Inc had to say about the next fiscal year’s budget.

"Agriculture, infrastructure, healthcare and rural development seem to be the key focus areas of the Budget 2018. We do not expect any immediate impact on consumption, either negative or positive. There is no real additional money in the hands of the middle class with which consumption can improve. However, the basic necessities of the poor in the country will be met because of the various schemes announced. The proposed reduction in corporate tax to 25% for MSME (medium, small & micro enterprises) companies with turnover up to Rs 250 crore is a welcome move, which will benefit a large number of retailers. They will be able to save on taxes that they would have otherwise paid at a higher rate. Overall, the budget is pro-poor, and one with a long term impact with no immediate benefits for retail sector."

“Union Budget 2018 is all about building India for the Future as it strikes the right balance between staying financially disciplined and investing for the longer term. The budget continues to boost the MSME sector with a slew of initiatives to address stressed assets, improved capital flows and lower taxes reducing the cost of doing business. We are pleased with the continued emphasis on Digital India including bringing 5 Crores for rural Indians online through 5 Lakh Hot Spots or the early investments in newer technology areas like National Programme for Artificial Intelligence or Block Chain Technologies. We believe that initiatives like e-assessments can be a game changer in improving India’s Transparency Index ranking facilitating a further flow of FDI into our country.”

“For MSMEs technology is an enabler for business growth and technology adoption is seen as a top priority. However, MSMEs are often unable to utilize the opportunities available through technology due to lack of working capital finance. The budget proposals of access to credit  and tax breaks to MSMEs will help reduce capital constraints  and encourage investment in IT solutions such as enterprise resource planning (ERP) to help them work smarter, operate more efficiently and be innovative.”

"Changes in the corporate tax regulations are a welcome move as this will provide a breather to more startups and MSME's who are not covered under the current policy. It's also extremely encouraging to see the government recognize the need for research in cutting-edge technologies around AI, ML and blockchain. Niti Aayog's involvement in the same will allow us to indigenously develop technologies on par with our silicon valley counterparts and reduce dependancy on them.Rural connectivity schemes like public wifi is a welcome move not just for telcos but also content players like us as digital consumption will rise and provide more monetization opportunities for content creators."

“Budget 2018 demonstrates the Finance Minister’s intent to boost Indian economy and more focused towards rural development, education, healthcare and social sectors. There is a bit of disappointment for the common man and for consumers as income tax rates haven’t been reformed. The reintroduction of standard deduction after many years of Rs 40,000 a year may not really enthuse tax payers.”

“Significant investments to address concerns around connectivity with impetus on development of highways and arterial roads, railways and airport infrastructure is bound to push inbound arrivals. A dedicated focus to promote seaplane activities in the country, along with development of heritage sites and iconic tourist destinations will further enhance appeal of India as a destination of choice. ‘Namami Gange’ will provide further fillip to religious tourism from both domestic and international travellers. Overall, it is a budget with a developmental agenda and could have benefited the tourism sector little more with announcements around simplified GST along with detailed FAQs for the travel industry.”

“We believe, an increased focus on the UDAN scheme will encourage domestic passengers to take affordable flights. An increase in connectivity to Tier 2 and 3 cities will overall boost tourism. The Airports Authority of India, currently has 124 airports. This will be a 5x expansion from the current capacity. An increase in airport capacity will further favour domestic tourism. The government aims at generating one billion trips a year.”

One prominent nuance of this year’s budget speech has been the focus on digital transformation which is a significant step that reaffirms the Government’s impetus on building a digitally empowered country. This will also provide an opportunity to reach larger masses more effectively and economically. The initiatives if executed well, will improve the livelihood and disposable income in the hands of masses, especially in rural India. This, in turn, will help the consumer goods sector acquire new consumer franchise in the long run. Improved infrastructure will also help ease of doing business and lower cost of operations.”

“The Union Budget 2018-2019 has predominantly focussed on revitalising the rural economy which is a good move. We also welcome the thrust on the healthcare, agriculture and infrastructure sectors outlined in this budget. Throughout last year, measures surrounding ‘Affordable Housing’ were the mainstay from the perspective of real estate industry. This was also evident in the Credit Linked Subsidy Scheme (CLSS) and the last Goods & Services Tax (GST) Council meet where they brought down the effective rate to 8% from 12%. A similar trend is visible in this budget where the ‘Affordable Housing’ fund under National Housing Bank (NHB) has been created as a part of the priority sector lending. However, there has been a silence in the budget on stimulating mainstream real estate demand. The sector grappling with the reforms-driven new order has been bereft of any meaningful interventions that could have been achieved through the budget.”