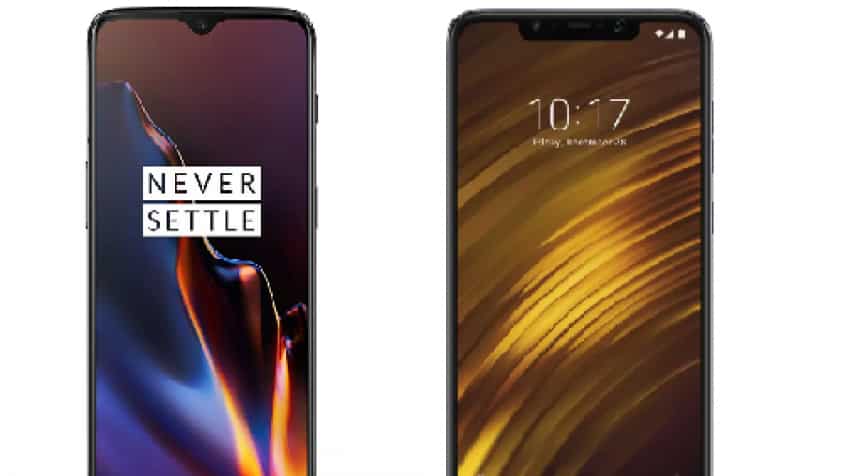 The decision to choose between two highly-popular smartphones is not an easy one and this detailed comparison will help the customers to make up their mind, Image source: Official website
Written By: ZeeBiz WebTeam
RELATED NEWS

OnePlus' latest flagship device OnePlus 6T which was launched in October this year has created a lot of buzz among the Indian buyers. The phone comes with premium features in an affordable price and has taken the Indian market by a storm. While Apple and Samsung smartphones are in direct competition with OnePlus devices, Xiaomi's Poco F1 too aims to disrupt the premium smartphone sector with affordable smartphones.

The decision to choose between two highly-popular smartphones is not an easy one and this detailed comparison will help the customers to make up their mind.

When it comes to the camera, the phone has 20+16 MP Dual rear camera with Optical image stabilization, Super slow motion, Intelligent Scene Recognition, Nightscape mode and Studio lighting. On the front, it is powered by a 16 MP selfie shooter. As far as battery is concerned, the phone has a 3700mAH lithium-polymer battery with Fast Charge technology.

Xiaomi's Poco F1 had a sensational debut in as the company sold a record 700,000 units globally in just three months. The smartphone comes in two variants - 6GB RAM, 64GB storage and 6GB RAM, 128GB storage. These variants have been priced at Rs 20,999 and Rs 23,999, respectively.

Poco F1 comes with 15.7 cm (6.18 inch) FHD+ Display and has a dual camera setup, which comes with a 12-megapixel primary sensor with 1.4-micron pixel and a 5-megapixel secondary depth sensor with 20MP Front Camera.

The phone also has dual channel audio which is supported by two speaker grilles placed at the bottom of the device. The phone also comes with cooling technology which comes into use when the device is put through demanding tasks like 4K video playing or gaming for more extended time periods.

Flaunting infrared illuminator and infrared lens to scan the 3D image of the user’s face, the Poco device is also capable of unlocking itself using Face Unlock even in darkness.