This week witnessed the shut down several ecommerce sites and lay off of many employees. 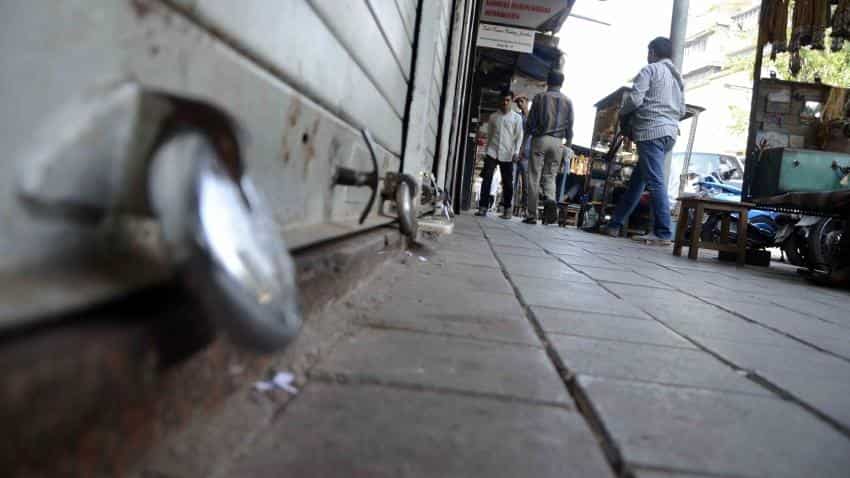 A shop shut on a street. Photo: IANS

Lately the only news coming out of e-commerce firms is not how much investment they have raised but how many people employees they have laid off. The honeymoon for startups seems to be over and investors are increasing the heat on them to show profits or perish.

It was just a day ago it was reported that ecommerce firm Askme.com shut down due to a severe cash crunch after one of its largest investors, Astro Holdings, pulled the plug on it.

About a month ago, Astro Holdings, led by Malaysian billionaire Ananda Krishnan, exited the AskMe Group. The 97% stakeholder in Askme exited after a long-drawn battle with minority shareholders. Astro Holdings' last cash infusion in the company was around Rs 150 crore only last month.

This week itself Snapdeal shut down Exclusively.com which had acquired just 18 months back and Ola decided to shut down TaxiForSure which it acquired a year back. Although a Snapdeal spokesperson said the company has absorbed all the employees from Exclusively.com, they however did not comment on the number of employees it had. While Ola's decision is expected to cost over 1,000 employees their jobs.

So the question is whether we are likely to see the e-commerce bubble bursting?

A reason for this is a 23% drop is the purse stings of investors shut tight. There has been a 23% drop in funding to startups in the first of 2016 as compared to the same period last year, according to Inc24's

Indian Startup Ecosystem Funding Report Half Yearly 2016. Ecommerce firms were the hardest hit as there was a 53% drop in market as compared to H1 2015.

“Although the number of deals in H2-2015 and H1-2016 is almost the same, there has been a considerable fall in deal value suggesting the busting of the bubble observed in H2-2015,” said the report. The report further added that from the half yearly plots of deals between 2015-2016, the rise and fall of the bubble is quite evident. “H2-2015 witnessed the peak of the bubble receiving all the big ticket deals: Flipkart, OYO, Pepperfry, Saavn, Snapdeal, Ola, Paytm, Grofers. Together they accounted for nearly $3 billion of the funding bubble. In H1-2015 to H2-2015 the rise of the bubble saw a soaring 50% increase in deals and 64% increase in deal value. While, in H2-2015 to H1-2016, the bubble burst and the total deal saw a whopping 53% drop, while number of deals remained almost the same,” said the report.

Not all startups are suffering, as funding to FinTech and HealthTech startups are gaining more ground than ecommerce firms. 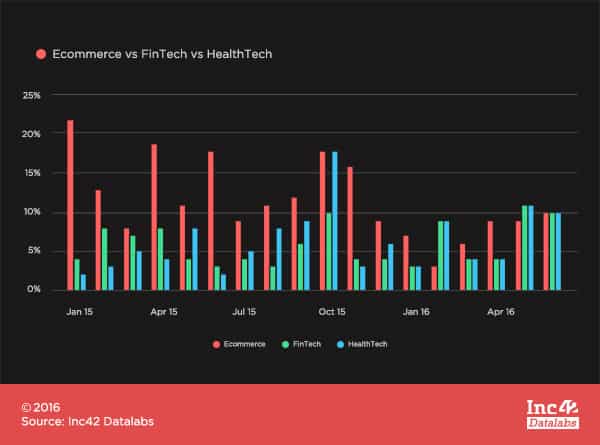 While investor funding to ecommerce companies were over 20% in January 2015, it has now drastically declined to 10%. At that time funding to FinTech and HealthTech startups was below 5%. Funding to both have now increased to 10% by July 2016.