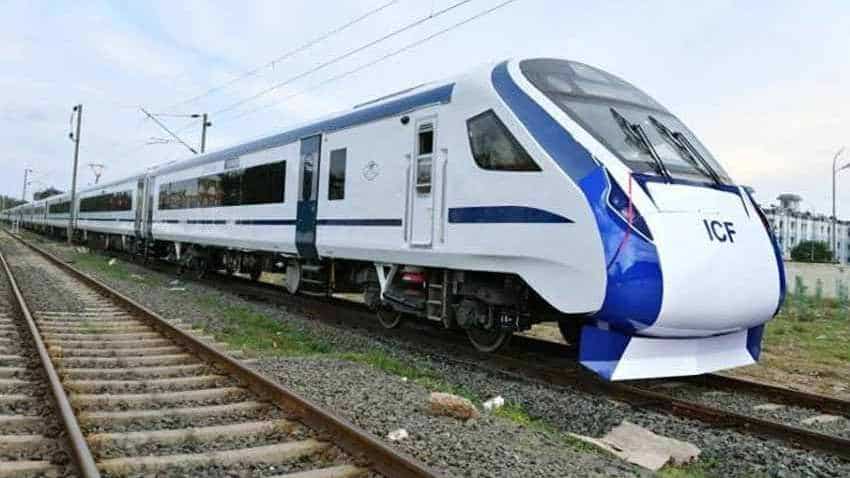 The 16-coach train will have two executive compartments with 52 seats each, and trailer coaches will have 78 seats each.
Written By: ZeeBiz WebTeam
RELATED NEWS

Good news for Indian Railways passengers who are always in a hurry! Train 18, which breached the 180 kmph speed mark during its trial between Kota Junction and Kurlasi station yesterday, may be put into service starting December 25. Indian Railways is holding the high-speed trial of the train, which may ultimately prove game-changer for the public transporter.

Developed indigenously by the Integral Coach Factory Chennai, the self-propelled train boasts of features like onboard wi-fi, automatic doors, 360-degree rotatable seats, large glass windows among the hosts of other world-class features. Earlier, it was decided that the train will replace Delhi-Bhopal Shatabadi but now it is being reported that the train will be dedicated to PM Narendra Modi's parliamentary constituency Varanasi.

December 25 happens to be the birthday of late PM Atal Behari Vajpayee and PM Modi may announce the service in a tribute to him. An IANS report said that though the train's timing has not been decided yet, it is possible that the train may start from New Delhi station at 6 am and to reach Varanasi at 2 pm.  In return, it may leave Varanasi at 2.30 pm to reach Delhi at 10.30 pm. As far as fare is concerned, its fare will be slightly higher than that of Shatabdi Express.

Train 18 has become the first train to touch such high speeds on the Indian rail network. The train has clocked a speed of 150 kmph on one-degree curve and 140 kmph at two-degree curve under the watchful eyes of senior Railways officials as well as those from the national transporter's Research Design and Standards Organisation.

जोर स्पीड का झटका धीरे से लगा: Train 18 exceeds 180kmph during trial. The stability of water bottles at this speed is testament to the quality of workmanship and design of our engineers pic.twitter.com/CImC49ljgm

It was a smooth ride for those inside -- occupying rotating seats to match the direction of the train - as the Train 18 became the first train to touch such high speeds on the Indian rail network.

The 16-coach train will have two executive compartments with 52 seats each, and trailer coaches will have 78 seats each.