Narendra Modi took oath today as the country's Prime Minister for his second term. The prime minister was sworn in along with Union ministers, including BJP president Amit Shah, Rajnath Singh, Nitin Gadkari. 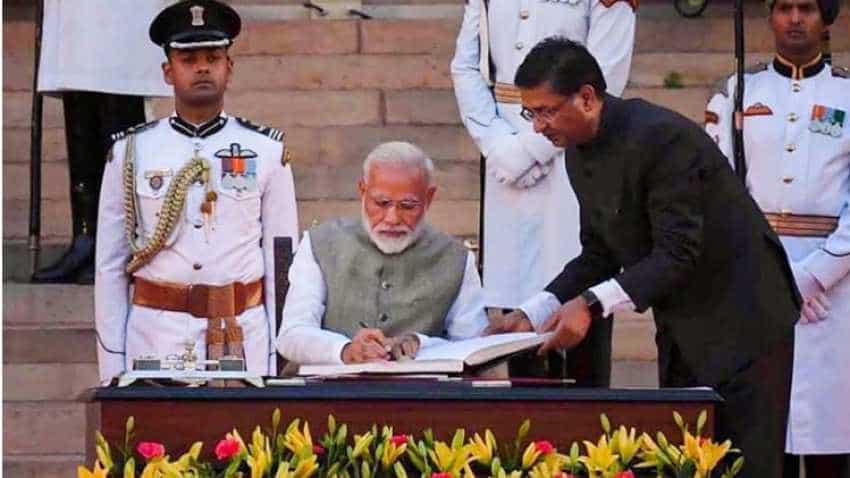 New Delhi: Prime Minister Narendra Modi signs the register after taking oath of office and secrecy for the second consecutive term during the swearing-in ceremony, at the forecourt of Rashtrapati Bhavan in New Delhi, Thursday, May 30, 2019. (RB/PTI Photo)

Narendra Modi took oath today as the country's Prime Minister for his second term. The prime minister was sworn in along with Union ministers, including BJP president Amit Shah, Rajnath Singh, Nitin Gadkari. Both Shah and former foreign secretary S Jaishankar were surprise picks. PM Modi (68) was administered the oath of office and secrecy by President Ram Nath Kovind at a glittering ceremony that witnessed attendance of around 8000 guests at the forecourt of majestic Rashtraparti Bhavan. After taking oath, PM Modi tweeted, "Honoured to serve India!" As many as 24 cabinet ministers and as many MoS' while nine other were given MoS with independent charge rank.

Other top leaders who were sworn-in today as cabinet ministers were D V Sadananda Gowda, Nirmala Sitharaman and Ram Vilas Paswan. Shah is expected to don the Finance Ministry portfolio. In the last five years, Shah has emerged as the BJP's key strategist who helped the party to expand its base after taking over the reins of the party in 2014.

Some key ministers in the previous Modi government have failed to find place in the new team. These include Sushma Swaraj, Rajyavardhan Singh Rathore and Maneka Gandhi. Former finance minister Arun Jaitley had yesterday written to Modi, requesting he didn't want to be a part of the new government due to health reasons.

The guests who attended the even included former prime minister Manmohan Singh, Congress President Rahul Gandhi and UPA Chairperson Sonia Gandhi, corporate honchos, film stars, chief ministers and a galaxy of leaders from BIMSTEC countries were part of the nearly 8,000 guests at the ceremony.