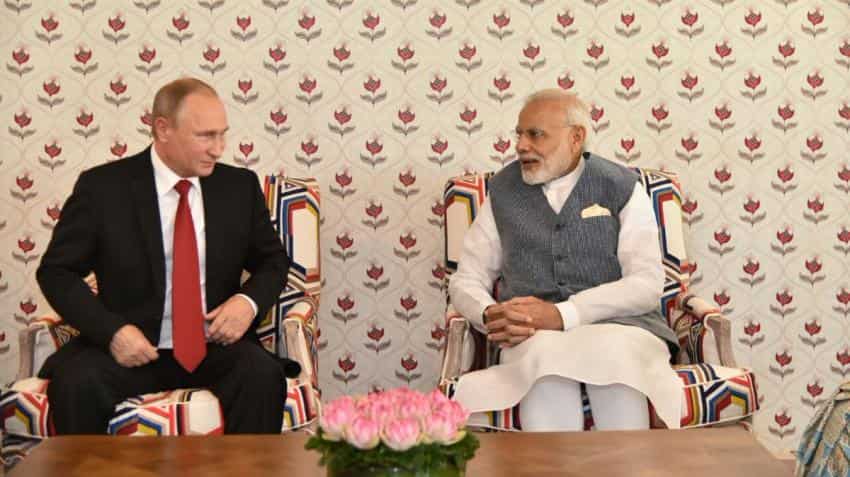 The two leaders are meeting as part of the annual India-Russia summit following which the two countries are expected to sign key defence, energy and agriculture-related business deals.

External Affairs Ministry Spokesperson Vikas Swarup said Modi and Putin "will discuss on a range of issues including defence, counter-terrorism".

Earlier, Putin arrived at the Dabolim airport to a red carpet welcome after which Modi, on Twitter, greeted the Russian President saying, "India welcomes you, President Putin! Wishing you a fruitful visit."

Top bureaucrats from the Russian defence, energy, trade and industries ministries are accompanying the President.

Modi and Putin via video conference will also participate in foundation-laying ceremony of the third and fourth power units at the Kundakulam nuclear power plant.

The two leaders are expected to hold discussions over lunch and issue a formal statement to the media following the summit.

Talks between India and Russia for setting up units 5 and 6 of the Kudankulam Nuclear Power Project (KNPP) are also expected to culminate into a general framework agreement.

This could be announced after talks Modi-Putin.

An official of the Russian atomic energy corporation Rosatom, the builders of KNPP, told IANS on Friday that negotiations for units 5 and 6 had been expedited so that an announcement could be made during the BRICS leaders summit in Goa on October 15-16.