Mumbai Rains train status today: The problem does not seem to end anytime soon as the IMD has estimated severe rains to continue even in the next 48 hours. 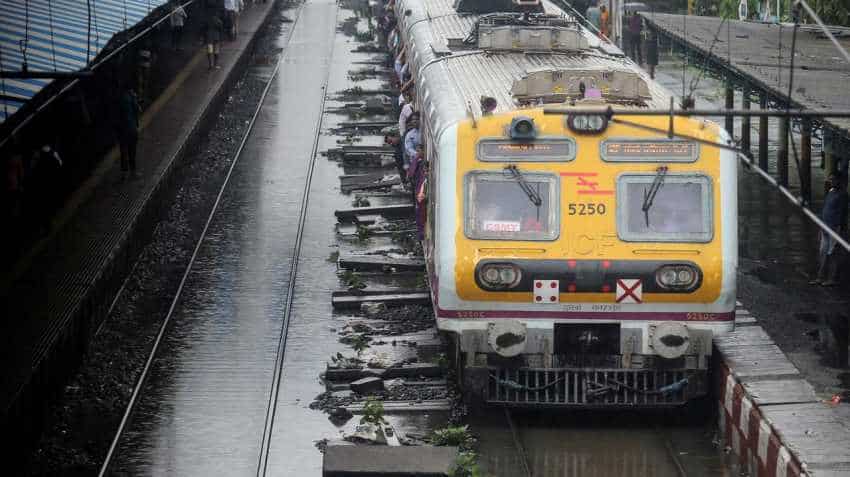 Mumbai Rains train status today: Record-breaking rains in just 24 hours have put Mumbai in trouble. Heavy waterlogging in major parts, landslide, various accidents, local trains halt and much more affected residents of the city badly when Sunday kicked in. Both Central and Western Railways have taken stringent measures to ensure the safety of passengers travelling either in local or express trains. Many stations have been hit by huge water-logging, which has forced the authorities to cancel or divert several trains. The problem does not seem to end anytime soon as the IMD has predicted severe rains to continue even for the next 48 hours. Even the highest tide ever in Mumbai is expected to come anytime soon today. If you are travelling in trains in Mumbai, then ensure to check the status of express and local trains before leaving your house. Don't take any unnecessary risk.

Here’s a list of trains that have been cancelled and diverted in Mumbai.

Central Railways tweeted that due to heavy rains, water logging/boulder fallen in southeast ghat, the train running pattern is as under: 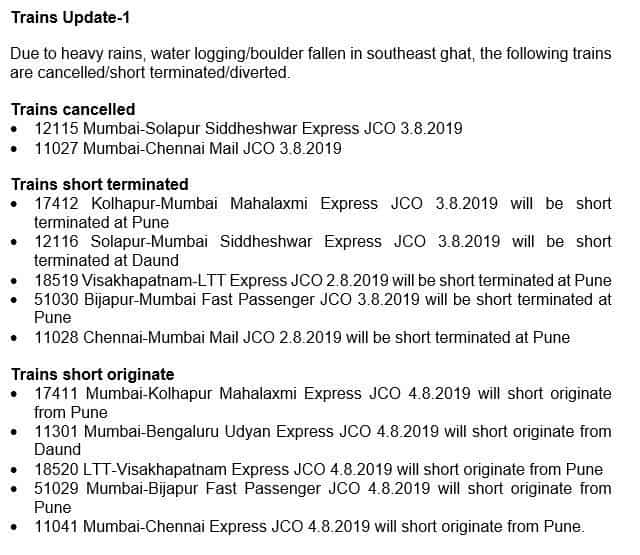 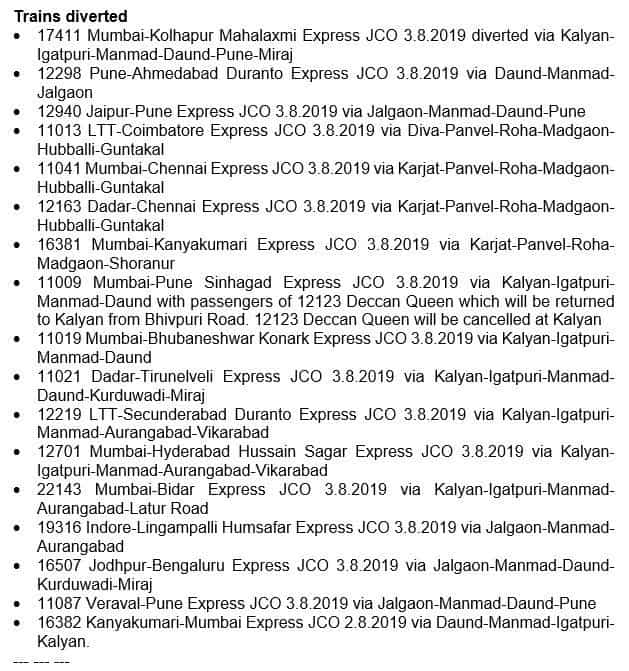 Further, a list of trains were short-terminated, short-originated or diverted due to the incident in south-east ghat. 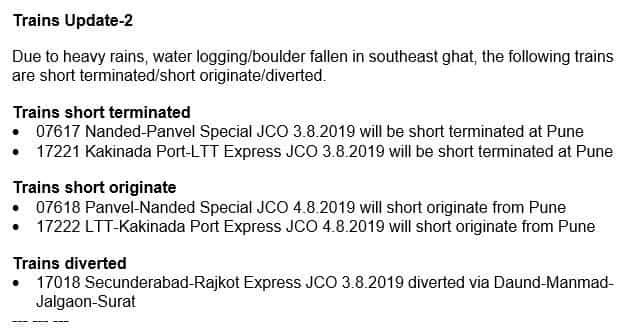 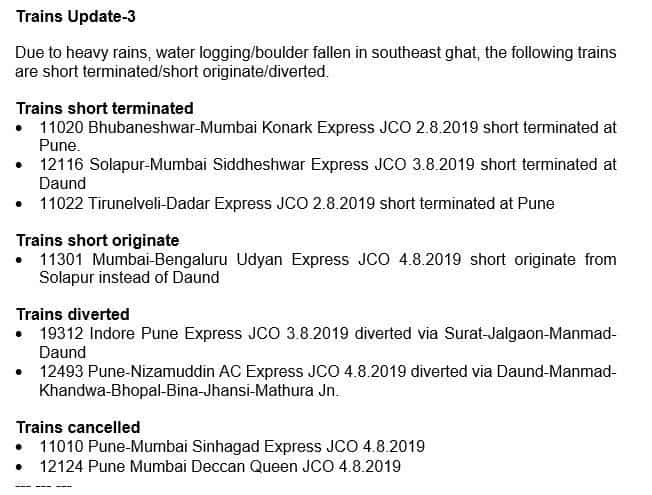 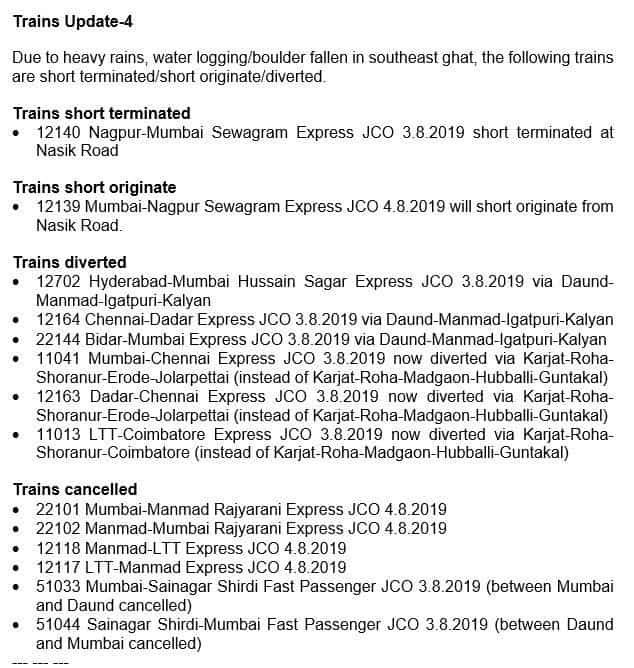 Majority of affected trains were travelling to Hyderabad, Pune, Nagpur, Chennai, Daund, Nizamuddin, Manmad and others. 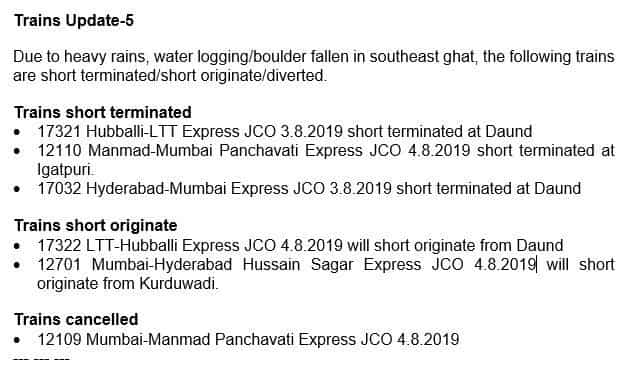 The Central Railways said, “Due to heavy & continuous rains and accumulation of water in few sections, services have been suspended on main line and harbour line of CR suburban section as a precautionary measure to avoid hardship to commuters. Position will be reviewed every hour and we will keep you updated accordingly." 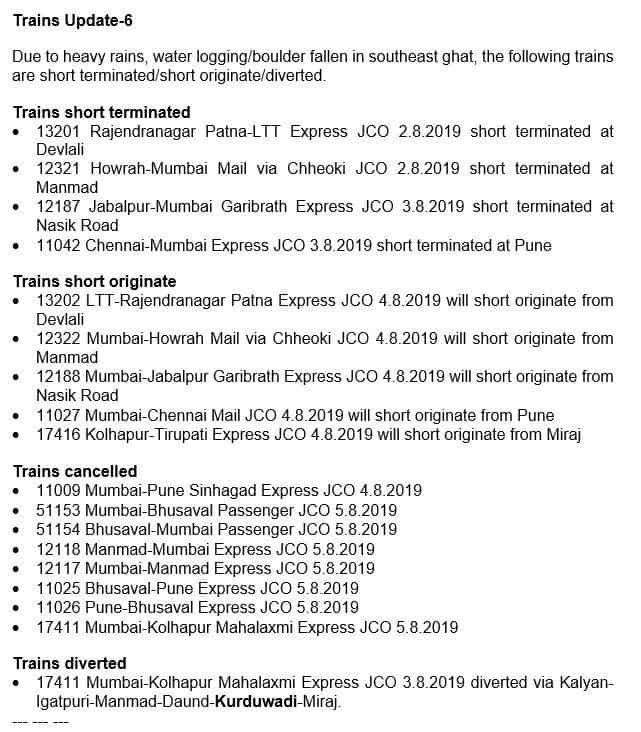 Almost every minute the Central Railways have been cancelling or diverting trains in Mumbai. 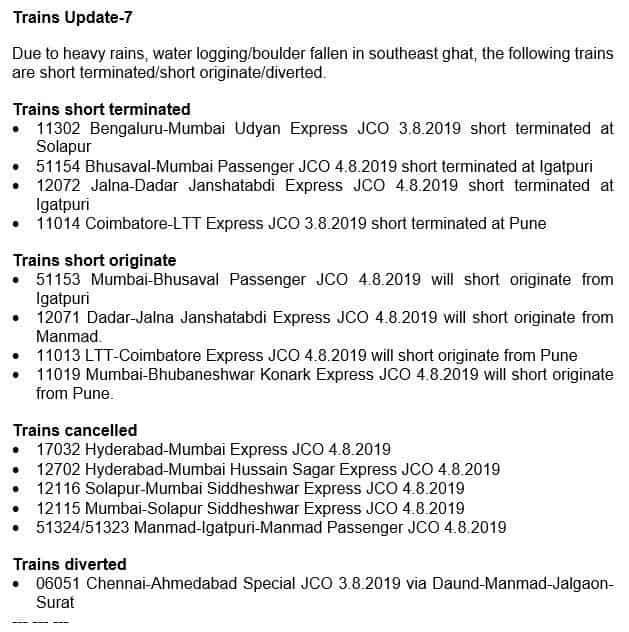 Further, South Central Railways also had to cancel or divert many trains. The regulatory said, “Cancellation/Partial Cancellation/Diversion of Trains due to Heavy Rains and Water Logging in Mumbai Division.” 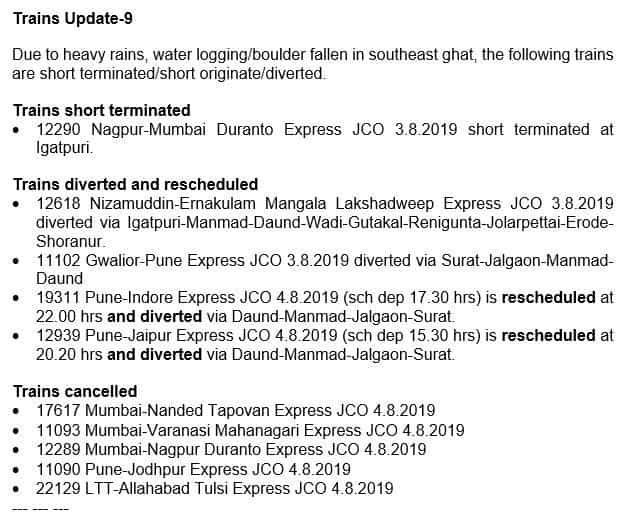 In terms of local trains, early morning, due to continuous heavy rains, there is an accumulation of water between Ambernath and Badlapur and on harbour line at Chunabhatti. Therefore, rail traffic has been suspended beyond Ambernath and on Harbour line between Vadala and Kurla.

However, CSMT-Vadala, Vashi- Panvel and CSMT-Andheri/Goregaon services are running on Harbour line. Later around 1115 hours, the local trains for Thane-Kalyan up and down services were resumed.

The impact of rains on Western Railway services was not severe than that of Central Railways as trains were running but very slow. There has been massive waterlogging in high populated areas like Virar, Vasai Road, Nalasopara, Dahisar, Mira Road and Borivali.

Here’s a list of trains cancelled, short-terminated or rescheduled by Western Railways. 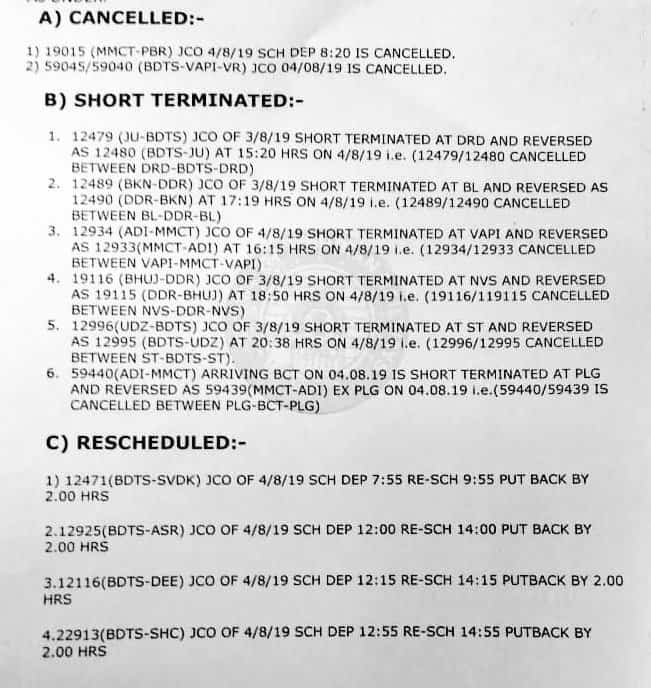 At 1200 noon, Western Railways said, “Water level between Vasai and Nalasopara:- Up through - 110 mm, Dn Through-140 mm, Up local line below rail top, Dn local line- clear. Services being run on slow lines between Vasai and Virar at cautious speed. Trains running with delays.”

Forecasting for next 48 hours, IMD on Sunday said, “Intermittent rain or showers with heavy falls at isolated places are very likely in city and suburbs.” However, in next 24 hours, heavy to very heavy rainfalls are in offing.

According to Skymet Weather, Mumbai Rains have been on the heavier side for the past 24 hours with waterlogging being witnessed in many parts of the city. In the last 24 hours, Santa Cruz has recorded 204 mm of rains. Moreover, it's not just Mumbai which has seen hefty showers but also other parts of the West Coast in Maharashtra.

As per weathermen at Skymet Weather, hefty rains are expected to continue over these parts including Mumbai today wreaking more havoc over the region.