Mumbai Rain Latest News Today: Not end of woes for Mumbai as more rains are expected. 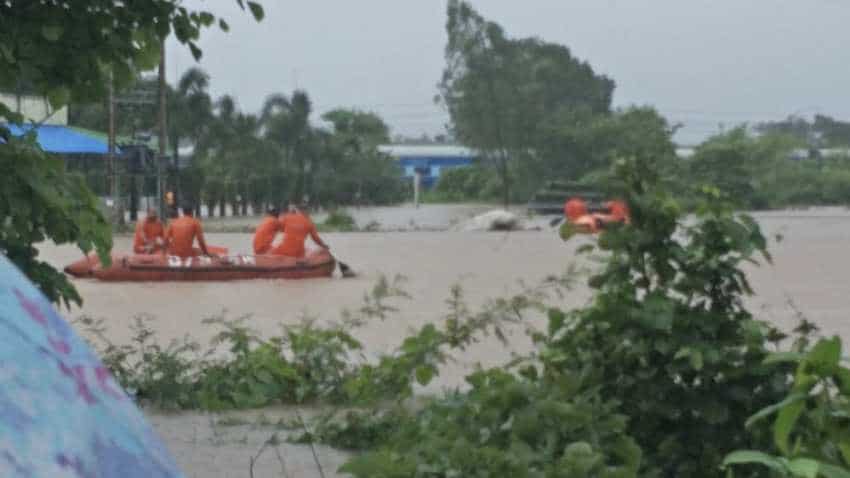 Mumbai Rain Latest News Today: Once again, heavy rains have battered Mumbai - the country’s financial hub. Since the past three days, Mumbai is witnessing heavy rains, which have resulted in massive traffic on roads, waterlogging, slowdown of trains and many delayed flights. With Saturday in, now Mumbai is facing even more problems, especially in the central side with  Mahalaxmi Express being stranded, and many areas like Ambernath, Badlapur, Kalyan and Ulhas Nagar witnessing waterlogging. The Central Railways have been forced to divert or cancel many other trains.

Mahalaxmi Express carrying nearly 2000 passengers was stranded near Badlapur and Vangani due to massive waterlogging. The rescue mission was in full swing today with Navy and NDRF taking charge. In the latest update, the Central Railways has announced that over 600 passengers on board have been rescued as of now by various government agencies.

More than 600 passengers of #MahalaxmiExpress rescued as of now by various govt agencies with NDRF.

Central Railways said that Maharashtra CM Devendra Fadnavis has appealed to the citizens stranded in Mahalaxmi Express to not worry and has ensured that all measures and rescue operations are taken care of by roping in all expert teams from NDRF, Army, Navy, Local administration, Police, Railway Ministry.

Maharashtra Hon'ble CM Devendra Fadnavis has appealed to the citizens stranded in #MahalaxmiExpress to not worry & has ensured that all measures & rescue operations are taken care of roping in all expert teams from NDRF, Army, Navy, Local administration, Police, Railway Ministry. pic.twitter.com/uK0Mmr6HNX

Meanwhile, the Central Railways has revised schedule or cancelled a few other trains. And if you are travelling from any of the below-mentioned trains, then it is advisable to check the status of your train:

11301 Mumbai-KSR Bengaluru Udyan Express JCO 27.7.2019 will leave from Solapur (instead of Daund as earlier announced). The Central Railways said, "Inconvenience caused is regretted."

Due to heavy rain fall compounded with overflowing of Ulhas river resulting in water logging at Ambernath, following trains are short terminated/cancelled/origin changed, as per Central Railways. These are: 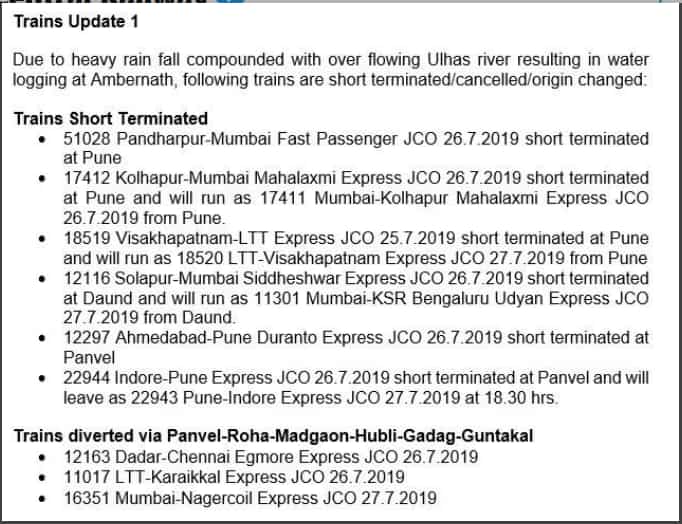 As for Central local trains, though the water has receded at Ambernath, the water level is increasing fast at Vangani. The Central Railways said, "Considering the safety of commuters, services can not be run between Badlapur and Karjat/Khopoli. Please bear with us."