Torrential rain since the past three days in Mumbai, Palghar, Thane, Raigad, Ratnagiri, and in some areas over 100 mm, have led to chaos on the roads, partially hitting rail operations and affecting around two dozen flights at the Mumbai Airport in the past 24 hours. 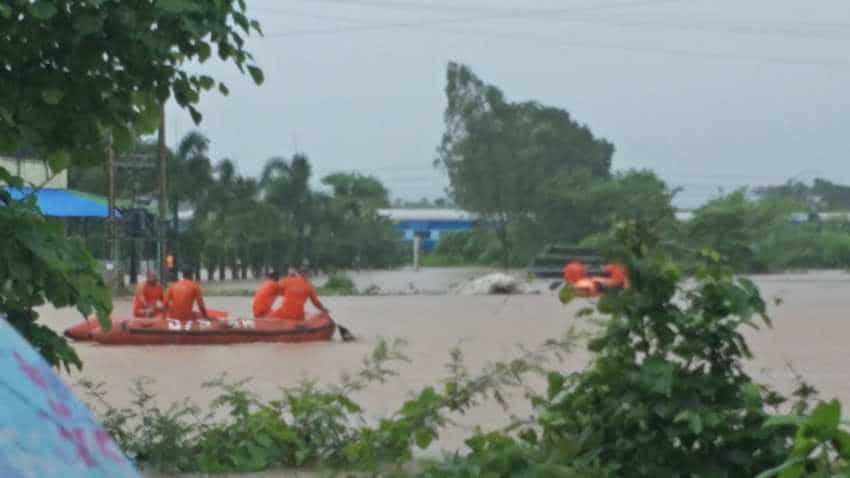 Mumbai Rains: Incessant rains over the last 24 hours have hit Mumbai hard, affecting normal life including road and rail services. A massive aerial and surface operation has been launched by Indian Air Force (IAF), Navy, Army and the National Disaster Response Force (NDRF) to rescue an estimated 1,500 passengers stranded in the Mahalaxmi Express on the flooded railway tracks at Vangani on Saturday, said an IANS report citing officials.

Following an SOS from the Maharashtra government to the Defence authorities, at least two helicopters, including a Seaking and a MI17, with relief material and personnel were despatched from Mumbai to the site. Simultaneously, teams of the NDRF reached the train from Badlapur, around 7 kms away in inflatable rubber boats and started extracting the passengers from the train, which left Mumbai for Kolhapur on Friday around 8 p.m.

The teams, which included divers with special equipment and medical aid, managed to rescue around 120 passengers, including women, children and toddlers, by noon though work was hampered due to continuing heavy rain. Officials said it may take several hours to complete the rescue operation depending on the rain and the flood waters.

According to Maharashtra Chief Minister Office, 7 Navy teams, 2 helicopters of Indian Air Force, 2 Military columns have been deployed along with local administration to help people, adding that two more military columns are on the way. The situation is under control, it added.

The IAF/NDRF teams also brought to safety a group of around seven passengers, who got down from the train to start walking towards Badlapur station but found themselves stuck in the swirling flood waters, running between 3-6 feet, for over two hours until some local villagers threw ropes at them.

Torrential rain since the past three days in Mumbai, Palghar, Thane, Raigad, Ratnagiri, and in some areas over 100 mm, have led to chaos on the roads, partially hitting rail operations and affecting around two dozen flights at the Mumbai Airport in the past 24 hours.

The government response came after hundreds of panicking, starving and thirsting passengers on the Mumbai-Kolhapur train started sending out videos appealing for help on the social media videos as the water levels continued to rise around the train. They said they had no drinking water or food since nearly 15 hours and no escape route as the train was practically cut off with five-six feet water on all sides.

Meanwhile, the Central Railway (CR) has warned the Mahalaxmi Express passengers against stepping out of the trains in view of the dangerous water levels outside and requested them to wait for help which was on the way. It added that a relief train has been stationed at Badlapur to ferry the passengers, along with food, water and medical supplies, besides making arrangements to take the passengers onward to Kolhapur.

Notably, the suburban trains in Mumbai functioned with delays of 15-20 minutes on Western Railway and CR, as the latter had to cancel services between Karjat-Kalyan (in Thane) owing to floods and waterlogging on the tracks since Friday. The worst-hit areas were Thane and Ratnagiri with towns of Ulhasnagar, Murbad, Badlapur, Tiwala, Vangani, Khed, Chiplun and surroundings practically submerged.