Farmers have gone on strike in Maharashtra's districts like Nashik, Satara, Kolhapur, among others on Thursday in order to press various demands including a loan waiver, which is likely to disrupt the vegetables and milk supply to cities like Mumbai and Pune. 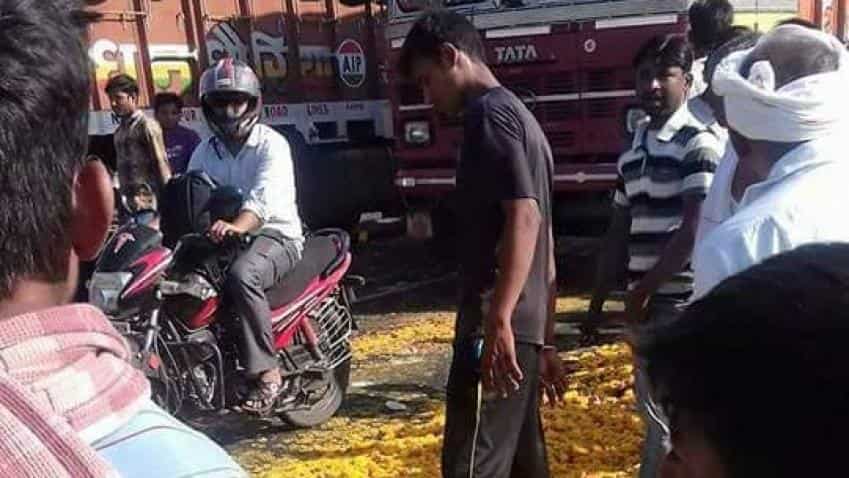 Striking farmers stage a demonstration in Marathwada, Maharashtra on June 1, 2017. Over half a million farmers are on 'indefinite strike' in the state to press for their various demands including the long-pending loan waiver package. Image Source: IANS
Written By: PTI
RELATED NEWS

Incidents of violence, including attempt to disrupt supply of vegetables and milk to Mumbai and other cities, marked farmers' `strike which started on Thursday in Maharashtra.

The farmers have launched the agitation to press various demands including a loan waiver.

Curfew was imposed in Yeola in Nashik district where 14 policemen were injured in stone pelting.

Chief Minister Devendra Fadnavis, while expressing willingness to hold talks with the agitating farmers, alleged that it was the opposition NCP and Congress who were instigating them.

A committee has been asked to suggest measures to resolve farmers' issues, he said.

Protesters in Satara, Kolhapur and Nashik districts tried to disrupt supply of milk and vegetables to Mumbai last night.

Traders in Mumbai claimed that they have not been affected by the stir, but said the supply from production centres across the state would be affected if the strike continued.

Kolhapur District Cooperative Milk Society, known as Gokul Dairy, filed a police complaint in Satara stating that one of its tankers was attacked on the way to Mumbai.

"Vegetable and fruit supplies have remained largely unaffected in the Navi Mumbai Agriculture Produce Market Committee, which supplies produce to Mumbai and neighbouring districts. There has been no decrease in the quantity we get every day," Satish Soni, administrator of Navi Mumbai APMC, told PTI.

The average supply of vegetables to Navi Mumbai APMC is around 7,000 tonnes, he said.

Police lathicharged to disperse a mob of some 600 agitators on the busy Yeola-Kopargaon road which was ransacking trucks of vegetables.

Additional Superintendent of Police Dr Rahul Khade, along with two inspectors, a sub-divisional police officer of Manmad and 10 constables were injured as the mob pelted stones, police said.

Curfew was imposed in Yeola town. Police fired eight rounds in air and also burst teargas shells. Platoons of State Reserve Police have been deployed in the area.

At Lasalgaon in Nashik district, protesters stoned a police jeep, damaging its windshields. Agitators threw onions, chillies, mangoes and tomatoes on the road as weekly markets in 82 places in the district remained closed.

APMC yards in Nashik wore a deserted look as farmers did not turn up to auction their agriculture produce.

In Aurangabad, vegetable traders clashed with farmers who asked them to close shops in Jadhavwadi area. Police detained some farmers and labourers.

Many farmers emptied milk on the road in Shioor village of Aurangabad district.

Chitale Dairy, milk supplier based in Sangli district, decided not to send its vehicles for milk collection tomorrow as a precautionary measure. It has asked member farmers to send milk to the main collection centre, said Girish

Chitale, a partner of the Dairy which supplies milk to Mumbai and Pune.

Police on Thursday provided some escort vehicles to give protection to milk collection tankers, he said.

Farmer organisations are demanding waiver of agriculture loans and better prices for produce, among other things.

In Nashik, farmers are also opposing the proposed Mumbai-Nagpur `Samruddhi Corridor' (expressway), which will require acquisition of farmland.