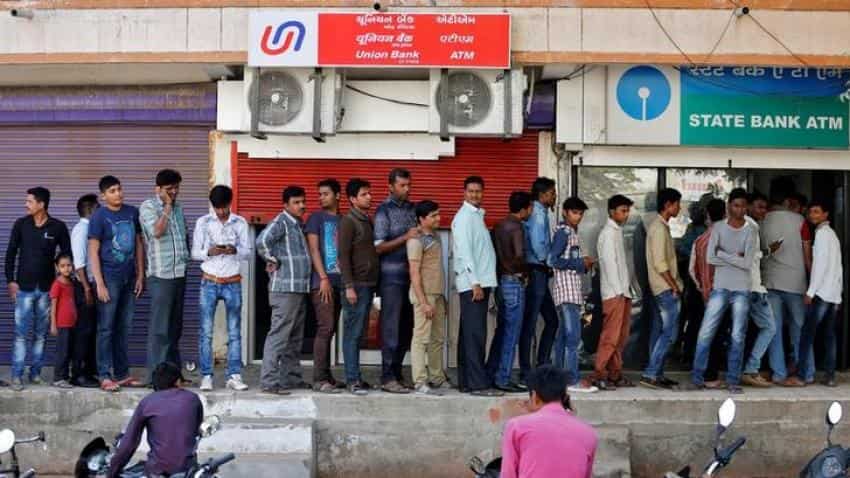 "But I expect the government and Reserve Bank of India (RBI) to quickly replenish banks and ATMs with new notes so that we can withdraw without any trouble," said Rakesh Kumar, queuing outside a bank in New Delhi. Image Source: Reuters
Written By: Reuters
RELATED NEWS

Indians lined up outside banks across the country on Friday, the last day for them to deposit their savings or see them become worthless after large denomination notes were scrapped in a bid to fight corruption.

Prime Minister Narendra Modi last month said Rs 500 and Rs 1,000 bank notes - worth a combined $256 billion and 86% of cash in circulation - would cease to be legal tender after December 30, disrupting the lives of hundreds of millions.

"I`m here to deposit a few old notes before the deadline expires," said Rakesh Kumar, queuing outside a bank in New Delhi.

"But I expect the government and Reserve Bank of India (RBI) to quickly replenish banks and ATMs with new notes so that we can withdraw without any trouble."

Modi had said his government would end the chaos and restore normality in 50 days. But analysts said the impact would last at least six more months, with concerns about lower economic growth, job losses and a fall in demand for goods.

"Economic growth, the obvious casualty, will tank to about 6.5% in the second half of the 2016/17 fiscal year against an average 7.2% in the first half," said D H Pai Panandiker, president of RPG Foundation, an economic policy group in New Delhi.

Another cost would be job losses, especially in the informal sector, where most poor people work, Panandiker said.

The informal sector accounts for 20% of gross domestic product (GDP) and more than 85% of total employment.

"I also believe that even after the 50-day deadline, people will face immense difficulty in withdrawing money as remonetising 86% of India`s cash will take a long time," he said.

In an interview to India Today magazine, Modi on Thursday said the demonetisation decision would give the economy a boost and provide long-term benefits, including forcing the vast shadow economy into the open.

"We took the demonetisation decision not for some short-term windfall gain, but for a long-term structural transformation," Modi was quoted as saying.

He has said the demonetisation action was needed to fight corruption and cut off financing for attacks by militants who target India.

Paranjoy Guha Thakurta, editor of Economic and Political Weekly, said there was "a fair amount of evidence" to suggest that economic activity had shrunk because of the move.

"The prime minister will have a tough time justifying his action," he said.