Jaitley on Friday met US Commerce Secretary Wilbur Ross, the first cabinet-level interaction between the two countries under the Trump Administration. 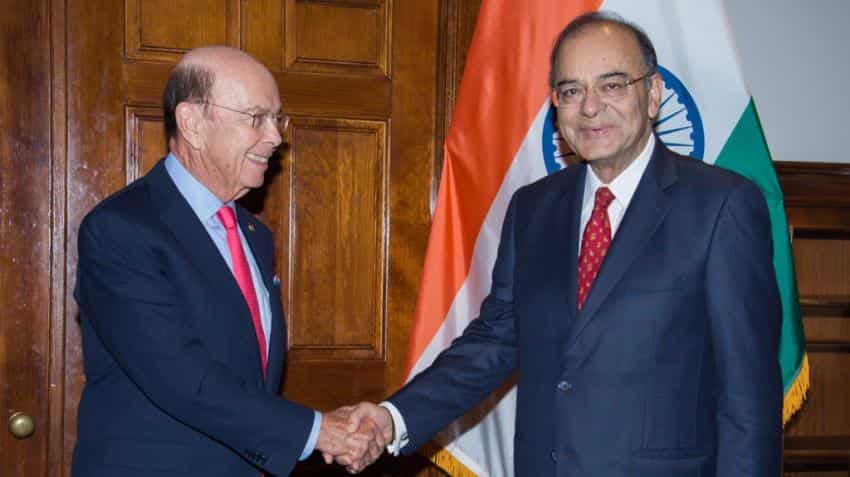 India-US ties have significantly improved over the last few decades, becoming more "stronger" and "matured" and defying changes in governments in both the countries, Finance Minister Arun Jaitley said on Saturday.

Jaitley, speaking at a reception hosted by India's Ambassador to the US Navtej Sarna, said the Indian government is looking forward to working with the Trump Administration to strengthen the various dimensions of the bilateral ties.

Stressing that India-US relationship has bipartisan support in both the countries, he said, "In one sense it is a bipartisan relationship. I am sure it would be a great privilege for us to continue with the new administration to strengthen the various dimensions of this relationship.

Jaitley on Friday met US Commerce Secretary Wilbur Ross, the first cabinet-level interaction between the two countries under the Trump Administration.

"The US-India relationship over the last few decades has significantly improved. It is far stronger, far matured. It defied the changes in the government whether in the US or in India," he said.

"There is a little more optimism this year than I have seen in the last three years. This seems to be the good news, as far as these meetings are concerned," he said.

"I met the (US) Commerce Secretary yesterday. I will meet the (US) Treasury Secretary tomorrow. This would be the first contact at that level between the new Administration and the Government of India," he said.

During the meeting with US Commerce Secretary yesterday, Jaitley strongly raised India's concerns over the Trump administration's move to tighten the H-1B visa regime, highlighting the key role played by Indian professionals in boosting the American economy.

President Donald Trump this week signed an executive order for tightening the rules of the H-1B visa programme to stop its "abuse" and ensure that the visas are given to the "most-skilled or highest paid" petitioners, a decision that would impact India's $150 billion IT industry.

Jaitley outlined the significant contributions the skilled Indian professionals have made to the US economy and expressed the hope that the US administration will take this aspect into consideration while taking any decision.

Jaitley, leading an Indian delegation, arrived here On April 20, to attend the annual Spring meetings of the International Monetary Fund and the World Bank.

In addition to his meetings and presentations at the annual Spring meetings of the IMF and the World Bank, Jaitley is also scheduled to attend meetings of other multilateral forums including that of the G-20 finance ministers.

Speaking about India's growth story, he said, "In the last three years even in the midst of slowdown across the world, India has been able to grow in the range of seven to eight per cent. That is the rate of growth that we have fairly maintained. Our all other economic parameters seems to be fairly well under control."

"The significant part of our economy today is, that there is perhaps for the first time, a huge amount of popular support as far as economic reforms are concerned," he said.

"And it is combination of this investment which is coming into India, coupled with higher public spending, even as the private sector spending was a little low, that has kept the Indian growth process going," he said.

He said the environment for doing business has considerably smoothened.

"India has learned from its past experiences. And this itself has helped in cleaning up the entire process. We have now undertaken a very ambitious reform of cleaning up the system of political funding in India, something which had been eluding Indian democracy for quite sometime," he said.