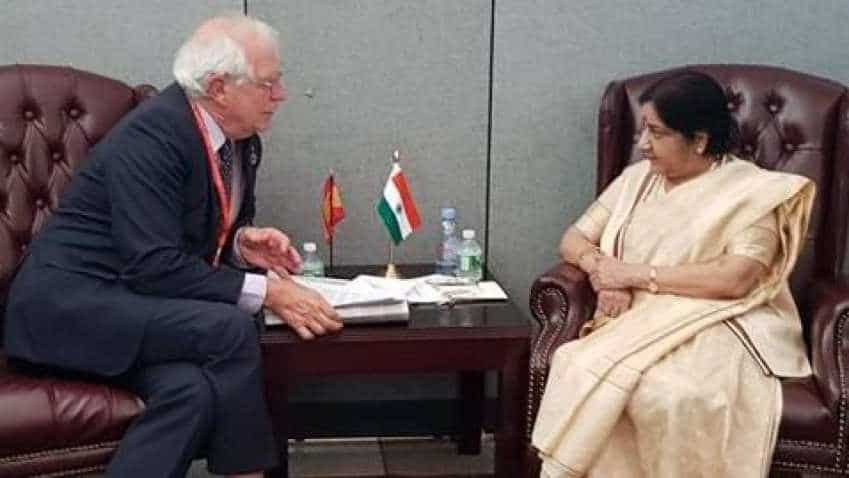 The ministry highlighted India`s increasing influence when it comes to the promotion of international stability and security. Twitter

External Affairs Minister Sushma Swaraj and her Spanish counterpart Josep Borrell on Tuesday agreed, following a bilateral meeting in the Spanish capital, that both countries supported the promotion of multilateralism and a rules-based concept of free trade.

The two leaders met at Madrid`s Viana Palace, the Spanish foreign ministry`s official headquarters, to discuss the most pressing issues on the international agenda, according to a ministry statement.

"The meeting has allowed us to confirm the growing degree of interlocution between Spain and Indian authorities and the current understanding between two partners that share values, democratic principles and vision regarding international affairs," read the statement, Efe reported.

Both chief diplomats broached the budding potential of closer economic ties and industrial and technological cooperation between the Mediterranean and South Asian nations, especially in fields in which Spanish businesses are global leaders such as the civil use of nuclear energy, transport, the railway sector and renewable energy.

The ministry highlighted India`s increasing influence when it comes to the promotion of international stability and security.

Borrell and Swaraj congratulated each other for the imminent signing of a bilateral deal on water resources.

In addition, Borrell presented Swaraj with the prestigious Grand Cross of the Order of Civil Merit medal to honour India`s support for Spanish victims of the earthquake that devastated Nepal in April 2015.

The Spanish official expressed his condolences and solidarity in the aftermath of a brutal suicide bombing that has killed at least 40 paramilitary troopers in Indian-administered Kashmir and has sparked international condemnation.

India and Spain had already strengthened their relationship on December 1 when Spanish Prime Minister Pedro Sánchez and his Indian counterpart Narendra Modi, met on the sidelines of the G20 summit in Argentina.

In early January, Borrell visited India to continue the high-level talks between both countries and prepare a planned state visit by Sánchez scheduled for the third trimester of 2019, although the PM has since called snap elections for April, which has, for now, put those plans on hold.