ICC World Cup 2019: Investors alert! This bank exhibits fierceness of Team India; here is how to profit from it 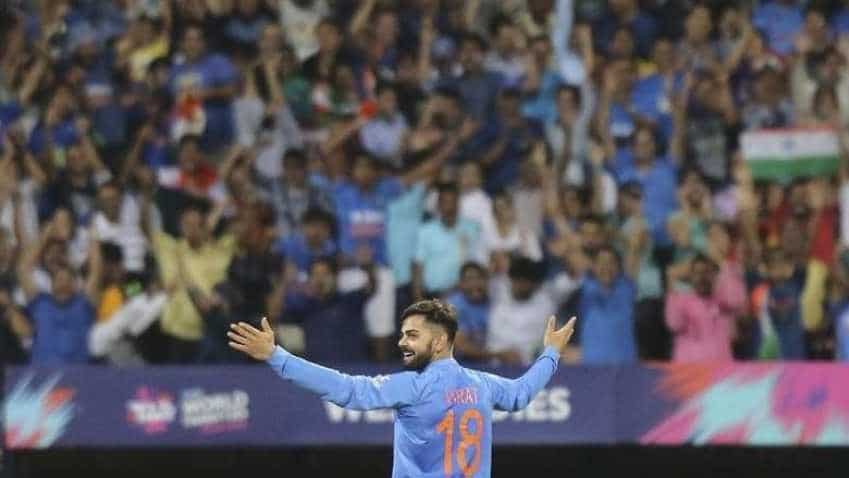 Everyone in India is eagerly waiting for the Virat Kohli led team to play its first ICC World Cup 2019 match. Photo: Reuters

Everyone in India is eagerly waiting for the Virat Kohli led team to play its first ICC World Cup 2019 match. The team will be competing against South Africa on Wednesday (June 05, 2019) at around 3 pm. Team India is ranked as No. 2 in ICC ODI list and Virat Kohli is ranked as the No. 1 ODI batsman and Rohit Sharma is No. 2. Understandably, India is expected to win the trophy. But in sports, victory is not guaranteed. However, as far as investors are concerned, they can certainly draw from sporting analogies and try to find similarities in stock markets to identify winners and thereby ensure they themselves are crowned as champion investors!

Yes, winning is a habit and the that sportsmen try to cultivate fearlessly and intelligently. The same strengths can be seen in some stocks too.

Significantly, some stocks are already creating history on Dalal Street with their fearless performances. One particular stock is HDFC Bank. It shows the fierce determination to succeed a la Team India! Notably, on Tuesday, its shares touched a new high. On Sensex, after earmarking 52-week high of Rs 2,465 per piece, HDFC Bank finished at Rs 2,454 per piece mostly subdued compared to previous trading session. But guess what! Just like every Indian heart is rooting for their home team to bag the championship this World Cup, investors can pick HDFC Bank and root for it as their best bet!

Why? Because, over the last five years, when the last ICC World Cup was held way back in 2015, this private bank become a true winner for investors. The bank has seen a massive rise in its stock price, and made many investors rich. In fact, now, it looks like today's new high is just the beginning for HDFC Bank, because experts have given it a 'Buy' rating.

Going forward, Saikiran Pulavarthi and Amaan Elahi analysts at Haitong International said, “We maintain our BUY rating on HDFC Bank (HDFCB IN, HDFCB group) with a revised price target of Rs2,900. We believe better visibility on mediumterm overall growth of the bank should warrant re-rating. In the past few cycles, HDFCB group has demonstrated sustained high growth in advances with high focus on risk, which has resulted in a stable and healthy profitability profile over the past two decades. The strategy laid out during the bank’s analyst meet reinforces our thesis that going forward the bank can sustain its overall growth on the back of multiple initiatives such as: (a) Increased focus on rural and semi-urban regions with higher than past rate of branch addition, (b) technology to aid customer servicing in deeper geographies in a cost efficient manner, (c) tie-up with Common Service Centers (CSCs) to offer all the bank’s products would improve geographical reach of the bank.”

The duo added, “We forecast 19% and 20% YoY growth in NII, respectively, in FY3/20 and FY3/21 supported by healthy corresponding credit growth of 20% YoY each year and healthy growth of 16% YoY each in fee income supported by corresponding growth in the transaction banking business. While the net interest margins (NIMs) should remain flat over our forecast period given the expected improvement in operating efficiency due to the digital push, we still forecast NP and EPS CAGR of 22% and 21%, respectively.”

Key positives that works well for HDFC Bank ahead, as per Haitong’s analysts are:  Uptick in overall industry credit growth, driven by improving macroeconomic conditions,  Increased penetration in the semi-urban and rural areas, and finally Product innovation and customer acquisition through the digital channel.

Hence, HDFC Bank has created magic in the past 5 year period since the last World Cup.

Well, HDFC Bank is a clear champion and hopefully the Indian cricket team will prove that it is one too at the ICC World Cup. You can watch the first match on Wednesday. It will held at The Rose Bowl, Southampton. The Indian cricket squad includes Kedar Jadhav Rohit Sharma, Shikhar Dhawan and team captain Virat Kohli. Then there are Dinesh Karthik and MS Dhoni- two wicket keeper-batsmen. Other members are Hardik Pandya, Ravindra Jadeja , Vijay Shankar, Bhuvaneshwar Kumar, Jasprit Bumrah, Kuldeep Yadav, Yuzvendra Chahal and Mohammed Shami.