ICC Cricket World Cup fever has gripped the country even as rains have washed a few contests. 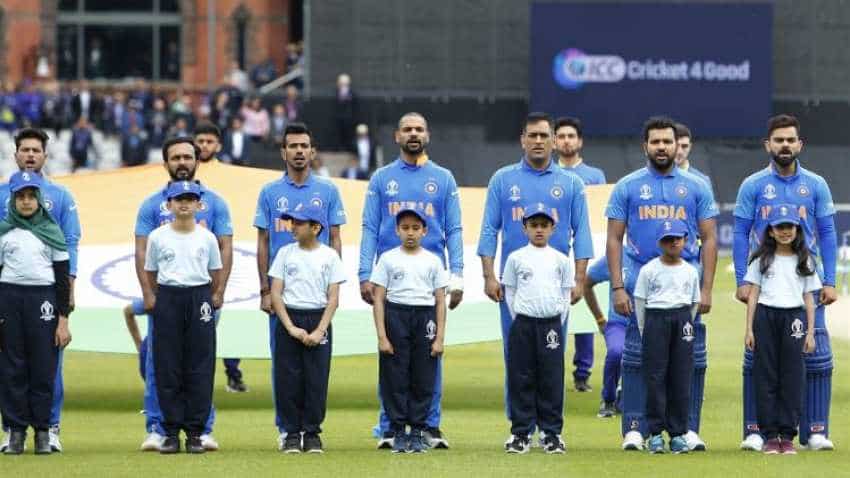 Manchester: The Indian team during National Anthem ahead of the 22nd match of 2019 World Cup between India and Pakistan at Old Trafford in Manchester, England on June 16, 2019. (Photo: Surjeet Yadav/IANS)

ICC Cricket World Cup fever has gripped the country even as rains have washed a few contests. The World Cup fever is more intense today as India take on Pakistan. The World Cup craze has pushed numerous fans to upgrade their old television sets to high-end TVs to enjoy the matches. According to a report by PTI, consumer electronics makers as Sony, Samsung, LG and Panasonic have reported up to 100 percent jump in sales of large-screen TVs (55-inch and above) compared to the same period last year.

The high-end TV sales have gone up not just in the metros but also spread to smaller cities like Hubli, Jabalpur, Raipur, Ranchi, Kochi and Nagpur too have posted robust numbers.

Companies are expecting the sales will pick up further as the tournament progresses towards the knock-out rounds. To lure customers, companies are giving attractive offers, including easy financing and cashbacks.

"The World Cup started around 10 days ago and now we can see the largest screen sizes, particularly 55-inch and above 4K TVs, a sales jump of almost 100 per cent. This is twice what used to be at the same time last year," Sony India BRAVIA Business Head Sachin Rai told the news agency.

Samsung India Senior Vice President, Consumer Electronics Business, Rajeev Bhutani said as India progresses ahead in the competition, sales would increase. "Cricket fans across India are upgrading to bigger TV screens to enjoy the World Cup. In the month of May, we saw sales of 55-inch and above TVs, which include our QLED TVs, double over last year. Sale of 75-inch and above TVs saw a 5X jump, indicating a rising demand for bigger screens this World Cup," he said.

Panasonic India Business Head (Consumer Electronics) Sharath Nair, said that after festive sales, sporting season is the major opportunity for companies to connect with customers and create engagement touchpoints. "This is particularly relevant during the sporting season as the demand for a superior viewing experience is triggered and customers look for advanced features such as a large screen and enhanced sound quality," he said.

"Following this trend, we are targeting 25 per cent growth in sales during the World Cup 2019 fuelled by the large screen sizes of 55 inches and above," Nair added.

The TV makers have not yet shared the number of units sold but said the growth was much higher this year compared to the previous few seasons.

The prices of large-screen TVs come in the range of Rs 50,000 to Rs 1.75 lakh. Some models are priced even higher.