The platform gives cricket fans the opportunity to put their knowledge to test by choosing their own dream team from the players on the actual field and be awarded points in accordance with the performance of the selected team combination. 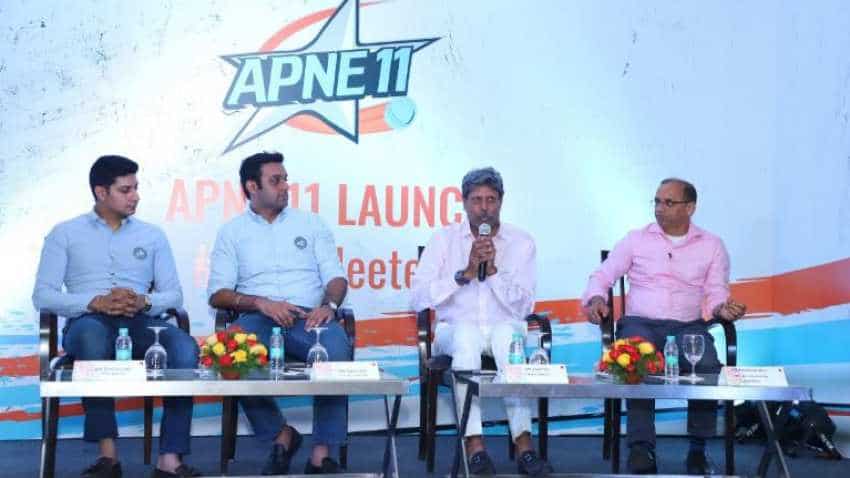 A new daily fantasy sports platform, Apne 11 was launched in India today (12th June). The platform gives cricket fans the opportunity to put their knowledge to test by choosing their own dream team from the players on the actual field and be awarded points in accordance with the performance of the selected team combination. Present at the launch, Legendary cricketer & Brand Advisor – Apne11, Mr. Kapil Dev said, “I am thrilled to be associated with Apne11 as it will present an open opportunity for millions to compete against one another and have the chance to connect with sports on an even deeper level than before.”

Akshay Jaggi, CEO, Apne11 said, “We are excited to launch Apne11, a first-of-its-kind daily fantasy sports platform which is easy to use, yet has an exciting game-play that leverages a gamer's skill to give fantasy sports fanatic the ultimate thrill of competing in real time against one another. The aim of Apne11 is to be the number one platform with the best experience ever. We are a customer oriented company and for us was a natural decision to launch our innovative site in this market. Our team is doing our best to become the first choice in the hearts of the fantasy players.” He added.

Apne11 also announced the launch offer wherein users will get 100% cash bonus deposits and an opportunity for the user to show their skill and play against Kapil Dev by participating in the Kapil League wherein the highest scorer on Kapil’s leaderboard will win Rs 25 Lakh. Also 5 lucky winners will also get a chance to meet the Kapil Dev himself, according to Apne11.

Roland Landers, CEO, All India Gaming Federation said, ''The number of online gamers to go up-to ten crores in a year’s time,“The Indian market is the fastest-growing fantasy sports market in the world, the market is projected to touch $5 billion in the next two years. As a game of skill, Apne11 connects the user with a platform where they can exhibit their knowledge and expertise of the game to win big.”

Ratul Sethi, Founder Apne11 said “The gaming industry is undergoing a revolution and with one of the world’s largest youth population, India is poised to become one of the world’s leading markets in the gaming sector. Taking forward the same vision we want to make daily fantasy sports game experience simpler & reach tier 2 and tier 3 cities. Our endeavor is to unite India in coming together to celebrate sports in the country. While cricket and football is at the forefront of our current product design, we look forward to bringing all sports on one platform in the coming years."

From bankruptcy to Rs 225 cr business! Know the story behind Osam Dairy

How 22-Year-Old Faishal Ansari, Founder Of An SaaS Startup RevertLab, Became Role Model For Many

Big boost for SMEs and start-ups! CEPA signed between India and UAE - See what FICCI says