"GST is expected to raise overall Indian welfare and is projected to be an inclusive policy in that it would be welfare improving for all Indian states," the paper dated March 24 said. 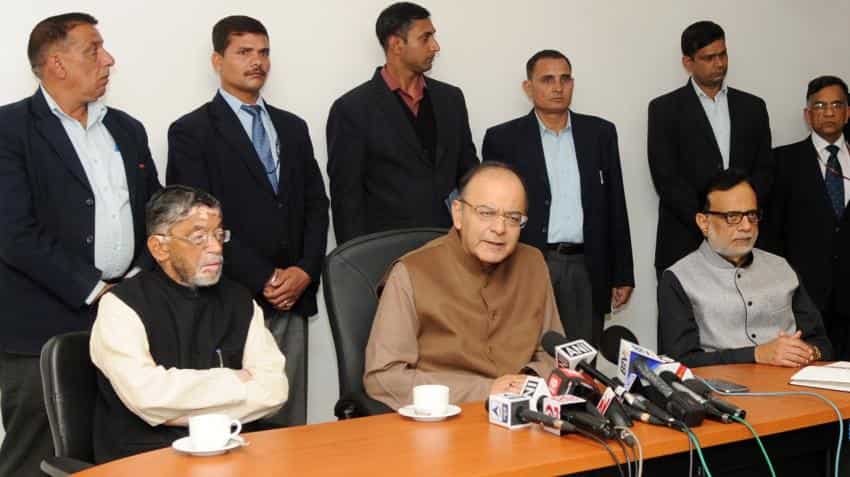 Finance and Corporate Affairs Arun Jaitley briefing the media after the conclusion of the 5th meeting of the GST Council in New Delhi on Dec 3, 2016. Photo: IANS
Written By: PTI
RELATED NEWS

The goods and services tax (GST) can boost India's GDP growth by up to 4.2% -- double the previous estimate -- as lower taxes on manufactured goods will bump up output and make products cheaper, a US Federal Reserve paper said.

GST, it said, could reduce inefficiencies in the production process while eliminating the current compounding effect of different central and state levies.

Dubbed as the biggest tax reform since Independence, GST will unify at least 10 indirect taxes into one to be collected at state and central levels.

In the International Finance Discussion Paper (IFDP), the US Fed researchers said GST is an 'inclusive policy' that is also expected to bring down overall domestic and international trade barriers.

"GST is expected to raise overall Indian welfare and is projected to be an inclusive policy in that it would be welfare improving for all Indian states," the paper dated March 24 said.

The Fed research note stated that assuming the aggregate weighted GST rate is 16%, there would be positive impact on real GDP of 4.2%.

"The model suggests that GST would lead to real GDP gains of 4.2% under the baseline assumptions, driven by a surge in manufacturing output... GST would raise overall welfare by 5.3% in India," it said.

Under the existing structure, at each point of sale, additional taxes are applied to the after-tax value of each goods and services.

The main purpose for GST is to eliminate this compounding effect by fixing the final tax rate, where goods will fall into one of the four rate categories of 5, 12, 18, and 28%.

The unified structure is currently expected to be rolled out in July.

GST's impact on GDP growth as estimated by Fed economists is much higher than the 1-2% as expected by the Indian government.

The International Monetary Fund (IMF) had earlier this year said GST could help raise India's medium-term GDP growth to over 8 % and create a single national market for enhancing efficiency of movement of goods and services.

The Fed note also said GST is expected to reduce overall domestic and international trade barriers, which in turn boosts welfare because consumers have access to cheaper products. GST will raise welfare for all states and is thus estimated to be an "inclusive" policy.

However, the note cautioned that if the aggregate GST rate is assumed at 20%, then there will be lesser positive impact of 3.1% on GDP.

At 20%, the GDP effect will be relatively equally distributed across states although port states will be slightly better-off.

This is so because non-port states benefit proportionally less from an international trade liberalisation as they still face domestic trade barriers to transport goods to and from the port.

However, the authors to the note -- Eva Van Leemput and Ellen A Wiencek -- have given certain caveats in the analysis, saying the impact of GST should be interpreted as a long-run effect. Also, if the tax rate on services is higher than the current tax level, it could dampen the overall effect.

"By simplifying the current complex tax system, GST is expected to broaden the overall tax base through increased transparency and compliance. In addition, the increased rate on services might generate extra revenues," the note said.

"The current system encourages production chains within state, which could be sub-optimal," it added.