The agency, which also affirmed the sovereign rating at BBB- with stable outlook, said the Reserve Bank will be on hold for the remainder of 2019 after Thursday's second consecutive 0.25 percent rate cut. 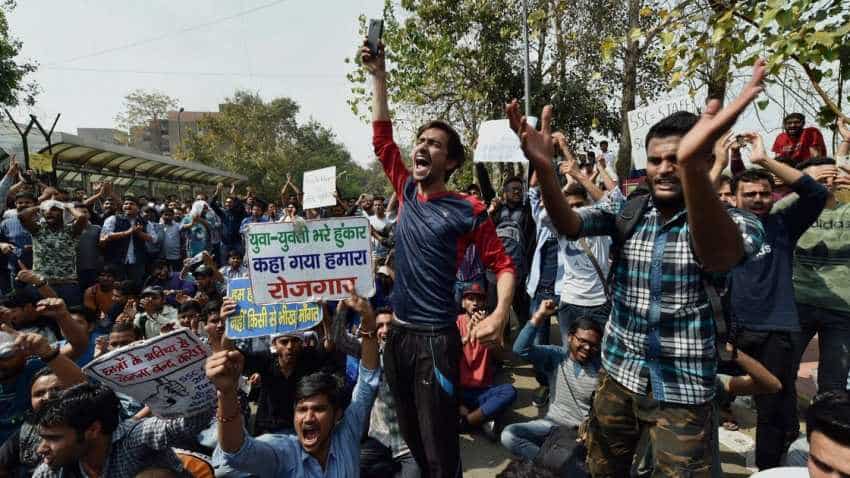 On the rural economy front, farmers have taken out marches and protested in various pockets of the country over a slew of matters. Representational Image, source: PTI

Global ratings agency Fitch Thursday said there has been a rise in unemployment in the country, and attributed GDP growth deceleration to domestic factors like weak manufacturing and dip in farmers' income. The agency, which also affirmed the sovereign rating at BBB- with stable outlook, said the Reserve Bank will be on hold for the remainder of 2019 after Thursday's second consecutive 0.25 percent rate cut. Commenting on the recent data showing a deceleration in growth, the agency said this is mainly driven by domestic factors, and emanates from weak manufacturing and low food inflation weighing on farmers' incomes.

It further "limited available indicators" also point to a "rise in unemployment". The comments on rural incomes and rise in unemployment come amid the election campaigns where the issue of low job creation has gained greater prominence, with the Opposition attacking the government performance. There have been concerns over jobless growth, which were also voiced by the then labour minister Bangaru Dattatreya in 2017.

Citing a study by Association for Democratic Reforms, former RBI governor Raghuram Rajan had last week said that jobs is the biggest issue in the elections.

A study by the Centre for Monitoring the Indian Economy had said as many as 1.1 crore jobs were lost in 2018 alone. The government has been citing the growth in EPFO registrations to stress on how jobs have increased and hiding negative dataprints on jobs and even growth.

On the rural economy front, farmers have taken out marches and protested in various pockets of the country over a slew of matters. The government has announced an income support scheme to farmers ahead of the elections.

The agency, whose research arm had earlier voiced doubts over the incumbent Narendra Modi government retaining power, said the elections will create a temporary uncertainty about the policy agenda, it said. However, the agency noted that governments of all hues have been reform-minded in the last 30 years.

Pointing out to opinion polls predicting a narrower majority for the next government which will make it difficult to carry out reforms like GST, it said "however, there seems plenty of potential for a continued focus on reforms."

It credited the Modi government for carrying out ambitious reform like GST and the bankruptcy law and also added that there has been a reduction in red tape which has reduced transactions costs.

The agency said GDP growth averaged 7.5 percent in the five years to FY19, which is more than twice the 3.6 percent median growth in the 'BBB' peer grouping.

It blamed a "weak fiscal position" as the factor constraining the sovereign rating and underlined that the next government's medium-term fiscal policy will be a keen factor to watch.

Governance standards remain weak, as illustrated by a low score for the World Bank's governance indicator, it said, pointing out that India is 47th percentile versus the 'BBB' median of 59.

The agency said it expects headline inflation to average 3.8 percent in FY20 and that the central bank will look for opportunities to ease further, even though its baseline projection is for a hold for remainder of 2019.

The capital injection by an additional 0.6 percent of GDP in FY19 provides banks with a near-term reprieve, it said, adding this has aided the pick-up in credit growth in recent months to 12.9 percent in January.

Bad loans have improved to 10.8 percent in December 2018 from 11.5 percent in March, but the overhang of the over USD 150 billion in stressed assets will be a concern, it said. Even though the stress among NBFCs has receded, the sector's ability to provide credit seems reduced, it said.

The agency expects current account deficit to come in at 2.3 percent in FY19, and underlined India is not immune to emerging-market turmoil, as illustrated by the recent rupee depreciation.