The Reserve Bank of India (RBI) offices have turned down several Indians including NRIs went for exchanging old currency notes as the deadline ends on March 31, 2017. 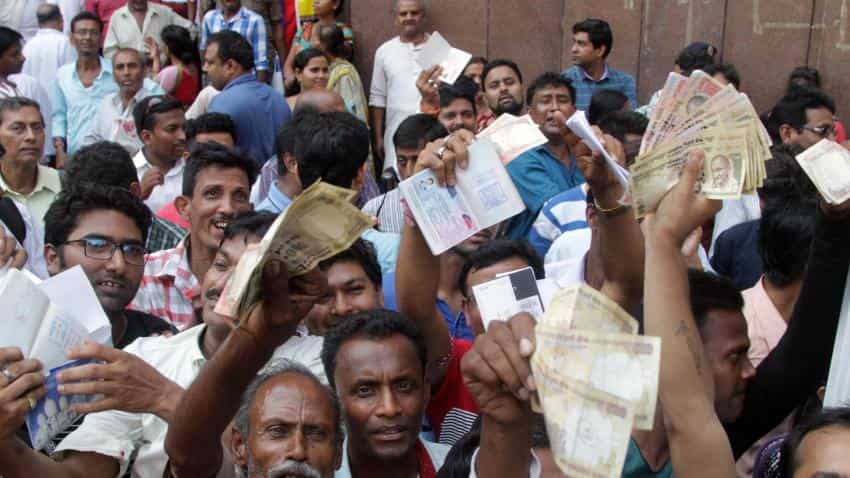 Demonetisation had positive impact on sectors like metals, capital goods

Demonetisation Impact: Finova Capital targets to disburse loan worth Rs 100 crore to MSMEs in 2017; plans to recruit 500 people in 2 years

1. People who stayed in India for a week after demonetisation were deterred from exchanging old notes for new ones by massive crowds outside banks

2. Most NRIs who work as labourers in West Asian countries such as Saudi Arabia, Kuwait, others were turned down due to non-possession of  customs declaration certificate

As the government's deadline to exchange scrapped old notes of Rs 500 and Rs 1,000 ends on Friday, several Indian residents including non-residential Indians (NRIs) who flew or were travelling out of the country after announcement of demonetisation on November 8 were turned away by the Reserve Bank of India (RBI),Business Standard reported.

According to the news report, the central bank cited a reason that they were in the country for a day after demonetisation, which came into effect after midnight of November 8-9. Although banks and ATMs were shut on November 9, the central bank has rejected that as a valid argument.

In a surprise move to control black money, terrorism and corruption, prime minister Narendra Modi had announced demonetisation of old currency notes of Rs 500 and Rs 1,000 on November 8 which resulted in massive cash crunch and chaos across the country.

With the March 31 deadline to exchange old notes for Indians who were abroad during the note ban period approaching, the RBI offices are teeming with people, with many queuing up from as early as 4:00 am in the morning. The entry is allowed at 10:00 am and the gates close by 3:00 pm, with more than 500 people failing to gain access daily, cited the news report.

“We cannot change rules even by a millimetre,” the report said quoting an RBI official as saying, when apprised of the challenges.

However, the RBI did not respond to a query sent by the newspaper on email as to why even those who were in the country only on November 9 was not being entertained.

“It is unfair to include November 9 in the conditions as it was announced by the prime minister that all banks and ATMs will remain shut that day. No one in the RBI seems to be listening. I returned in February and this is the third time I am standing in a queue,” the report said quoting an executive with insurance company Deepak Singh, as saying.

Similarly, the report further said that those who stayed in the country for a week after demonetisation said that they were deterred from exchanging old notes for new ones by massive crowds outside banks during the initial phase and theirs must be considered a valid case.

"They may have genuine reasons and problems but the message from the top (RBI management) is a strict application of rules," the report said quoting an another RBI official as saying.

As per the FAQs on the RBI website, the exchange or deposit of old notes will be permissible for “Resident Indian citizens who were abroad during November 9, 2016 to December 30, 2016”. Non-Resident Indians (NRIs) have time till June 30 to exchange old notes but their value must not exceed Rs 25,000.

As the queues get longer, the announcement at timely intervals by the central bank offices asks those “who were in the country even for a single day between November 9 and December 30 to leave the queue as they are not eligible for the exchange”.

Non-residential Indians (NRIs) too are not having an easy time.

With the exchange procedure turning into a disappointment, many who have travelled to Delhi from states far and near — Punjab, UP, Haryana, and Rajasthan — are seen squatting outside the RBI office even after the gates close at 3:00 pm.

Most are NRIs who work as labourers in West Asian countries such as Saudi Arabia, Kuwait and the United Arab Emirates (UAE). Another section of NRIs seen outside the RBI office are from Punjab and work in Canada.

Most of them do not have the customs declaration certificate, a ''mandatory'' document.

“I returned to India from Riyadh (Saudi Arabia) after two years on January 31 to get old notes exchanged. It is only after reaching the RBI office that I was told that I do not have a customs certificate. Is the immigration stamp not enough? This is harassment,” the report said quoting Salim Ahmed, as saying.

Although the window for exchange in banks closed on December 30 for those who were in the country, there are many who missed the opportunity. The RBI is their last chance to exchange old notes.

Demonetisation had positive impact on sectors like metals, capital goods

Demonetisation Impact: Finova Capital targets to disburse loan worth Rs 100 crore to MSMEs in 2017; plans to recruit 500 people in 2 years