The Prime Minister inaugurated the 'Make in India' pavilion at DefExpo 2018, which is Asia's biggest international land, naval and internal homeland security systems exhibition. Making an apparent reference to scrapped MMRCA deal, the Prime Minister said, "I do not want to spend 10 years in discussion without any tangible outcome." 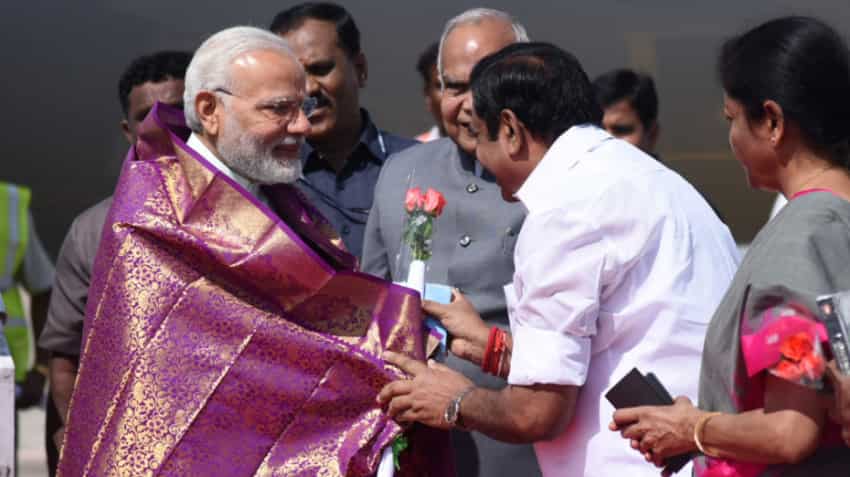 DefExpo 2018: Prime Minister Narendra Modi today said India is ready to take all steps to equip armed forces, and added that the country will discuss defence production with local as well as foreign companies. The Prime Minister, who inaugurated the Defence Expo at Thiruvidanthai in Tamil Nadu, said the Defence Procurement Procedure was revised with many specific provisions for stimulating growth of the domestic defence industry. The Prime Minister said, "There was a time when critical issue of defence preparedness was hampered by policy paralysis. We have seen the damage of such laziness, incompetence or perhaps some hidden motives, can cause to the nation. Not now, not anymore, never again." In an apparent reference to the scrapped Medium Multi-Role Combat Aircraft ( MMRCA) deal, Modi said he did not want to spend 10 years in discussions without any tangible outcome.

The Prime Minister said, "Our commitment to peace is just as strong as our commitment to protecting our people and our territory. For this we are ready to take all necessary measures to equip our armed forces, including through the establishment of a strategically independent defence industrial complex."

Describing Thiruvidanthai and the near-by region as the land of India's "glorious maritime legacy", he said "this is the land from where India Looked East and Acted East thousands of years ago.""I am delighted and overwhelmed to see an enthusiastic gathering in this historic region of Kanchipuram in the great state of Tamil Nadu. I am very happy to be here in the land of the great Cholas who established India's historical civilization links through trade and education," he said.

The exhibition, which began yesterday, with Defence Minister Nirmala Sitharaman launching the event. Major global and domestic military companies are showcasing their latest weaponry and platforms at the DefExpo 2018. These firms are eyeing a slice of the mega military market in India which is the world's biggest arms importer. India is reportedly looking to focus more on exporting military equipment, keeping in line with Prime Minister Narendra Modi's 'Make in India' initiative.

The 'Make in India' pavilion at DefExpo 2018 is Asia's biggest international land, naval and internal homeland security systems exhibition. DefExpo 2018 is stated to be the first serious attempt by the government to transform India into a hub of military manufacturing.