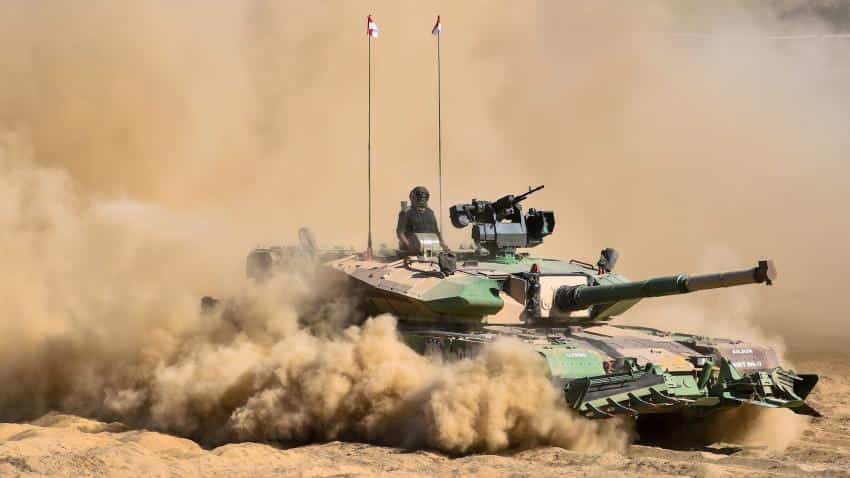 DefExpo 2018: An Indian Arjun Mark II tank drives through sand during a display at the DefExpo 2018, in Chennai on Wednesday. Image source: PTI
Written By: PTI
RELATED NEWS

The NDA government is trying to project the 10th edition of the biennial event as first serious attempt to transform India into a hub of military manufacturing and pursue its goal of achieving turnover of Rs 1,70,000 crore in military goods and services by 2025 by promoting the domestic defence industry. Though the four-day-long DefExpo 2018, on the outskirts of Chennai and close to the temple town of Mahabalipuram, began today amid protests on Cauvery issue, it will formally be inaugurated by Prime Minister Narendra Modi tomorrow. DMK working president M K Stalin asked people to hoist black flags atop their houses tomorrow during Modi's visit to Tamil Nadu tomorrow to lodge their protest on Centre's "inaction" on the Cauvery issue. Defence Minister Nirmala Sitharaman said though the Prime Minister will observe a day-long fast tomorrow, he will come here and inaugurate the expo. Modi and other BJP leaders are slated to observe a day-long fast tomorrow to protest against the washout of the budget session of Parliament due to disruptions by the opposition.

Addressing a press conference, Sitharaman said the government aimed to promote India as a major manufacturing destination through the Defence Expo and responses to the four-day long event by both foreign and domestic industries have been very impressive.

The Defence Ministry last month had come out with a draft policy which envisages achieving a turnover of Rs 1,70,000 crore in military goods and services by 2025 by promoting the domestic defence industry. The policy says the aim is to make India one of the top five manufacturers of defence platforms with active participation of public and private sectors.

At the expo, there was excitement among the global aerospace giants about India's just announced plan to procure 110 fighter planes.

"We are very excited about the India's announcement to procure 110 fighter jets," said Robert Hewson, Vice President of Saab Group.

According to the Defence Ministry, over 670 defence firms including 154 foreign manufacturers are participating in the exhibition of weapons and military hardware.

It is being attended by official delegations from over 47 countries including the US, the UK, Russia, Afghanistan and Sweden, Finland, Italy, Madagascar, Myanmar, Nepal, Portugal, Seychelles and Vietnam.

Secretary (Defence Production) Ajay Kumar said China was invited but it has not sent any delegation.

The theme of the expo is "India: The Emerging Defence Manufacturing Hub".

A raft of defence deals including for setting up joint ventures were inked between private industries on the sidelines of the expo.

Adani Group said that it has collaborated with Punj Lloyd and Rave Gears (USA) for the design, manufacture and assembly of high precision gears and transmission systems for rotary platforms.

India's Kalyani Group and French firm Plansee Tungsten Alloys also announced the forming of their strategic partnership in the areas of "special metallic penetrators" required for manufacture of high-end ammunition.

MKU Limited and Thales have announced inking of two MoUs for strategic co-operation in the development and production of optronic devices and F90 close quarter battle (CQB) rifle for soldiers.