Cricket World Cup starts today and to really get you into the sporting mood, here we reveal stocks on Dalal Street that emulate the explosive character of Team India members. 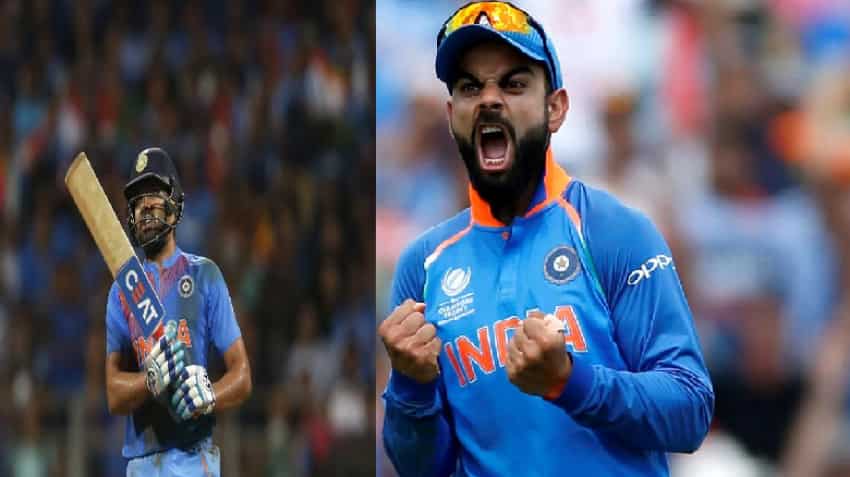 The Indian cricket team will play its first match against South Africa on June 05, 2019. Photo: Reuters

Every cricket lover across the globe is prepping to lend support to their favorite team, batsman, wicket-keeper or bowler at the ICC Cricket World Cup 2019, which begins from Thursday onward. However, the first match will be between England and South Africa. The Indian cricket team will play its first match against South Africa on June 05, 2019. There is excitement and amazing enthusiasm not only on the cricket ground, but also people who plan to watch matches at home or elsewhere.

Yes, the spirit of cricket is high, especially when it comes to World Cup. Who will take home that shining golden cup, time only will reveal. To really get you into the sporting mood, as well as help you add to your wealth, here we reveal stocks on Dalal Street that emulate the explosive character of Team India members.

Zee Business TV has highlighted two stocks that have characteristics Captain Virat Kohli and vice captain Rohit Sharma are famous for. When these two are on field, magic happens as they are both game-changers in their own right.

Ans yes, just like that, you can also pick stocks which will act as multibaggers.

It would be Tata Consultancy Services (TCS) that has many similarities to captain Kohli, while HDFC Bank has qualities of Rohit Sharma. How? Let’s find out!

The Zee Business TV experts suggested that, just like Kohli is the undisputed leader of the Indian cricket team, TCS is is the same in the Indian stock markets. Kohli aged 30 years, who became the Indian cricket team captain at quite an early age, is a right-handed top order batsman, having best ever test ratings, ODI rating and T20 rating. Also, Kohli  is a top-ranked ODI batsman, and is among one of the world's most famous athletes.

Meanwhile, TCS since past few fiscals has emerged among best stocks, and also is second most valued company on exchanges. Growth in TCS has been praiseworthy in the past. One of the major gems of TCS is that, the company has maintained its profitability despite global uncertainties.

Meanwhile, experts said that, Rohit Sharma has an amazing strike rate on the field. Being a right-hand batsman, Sharma is a run-machine on the pitch. In fact, he also became the first cricketer to score four centuries in T20 cricket.

And which stock reflects that kind of strength and aggression? It is none other than HDFC Bank, which has been defined as 'a bank too big to fail' by RBI. Also, the lender has been giving over 20% return to investors! With good business portfolio along with stable non-performing assets (NPA), it all makes HDFC Bank an appealing stock.

Experts are optimistic and have given buy rating on these two stocks.!

JM Financial in its research note said, “TCS has demonstrated its ability to drive growth without sacrificing profitability vis-a-vis its rivals inability to do so is set to widen the valuation premium. Further, TCS’ timely investments in digital capabilities and its consistently strong management will continue to drive its growth momentum. At a time when peers have cautioned against lower profitability in building their digital capabilities, TCS is already in building its digital capacities.”

The note explained Q4 earnings and outlook by saying, “Reported USD revenue growth was marginally ahead of expectations, EBIT margin, adjusted for the on-off was in-line and outlook was upbeat with a strong deal closure during the quarter. While management exuded confidence in achieving double-digit growth in FY20, we have conservatively factored 9.5% USD revenue CAGR over FY19-21 given the high (31%) exposure to the BFSI vertical where the management admitted to pockets of volatility.”

Saikiran Pulavarthi and Amaan Elahi analysts at Haitong International in their research note said, “We maintain our BUY rating on HDFC Bank (HDFCB IN, HDFCB group) with a revised price target of Rs2,900. We believe better visibility on mediumterm overall growth of the bank should warrant re-rating. In the past few cycles, HDFCB group has demonstrated sustained high growth in advances with high focus on risk, which has resulted in a stable and healthy profitability profile over the past two decades. The strategy laid out during the bank’s analyst meet reinforces our thesis that going forward the bank can sustain its overall growth on the back of multiple initiatives such as: (a) Increased focus on rural and semi-urban regions with higher than past rate of branch addition, (b) technology to aid customer servicing in deeper geographies in a cost efficient manner, (c) tie-up with Common Service Centers (CSCs) to offer all the bank’s products would improve geographical reach of the bank.”

“We forecast 19% and 20% YoY growth in NII, respectively, in FY3/20 and FY3/21 supported by healthy corresponding credit growth of 20% YoY each year and healthy growth of 16% YoY each in fee income supported by corresponding growth in the transaction banking business. While the net interest margins (NIMs) should remain flat over our forecast period given the expected improvement in operating efficiency due to the digital push, we still forecast NP and EPS CAGR of 22% and 21%, respectively,” said the analysts.

The duo added, “To arrive at the valuation of the overall bank, we have used the sum-of-the-parts (SOTP) valuation approach, where we have valued the standalone bank, its NBFC (HDB Financial; unrated) and its stock broking subsidiary (HDFC Securities; unrated). For the standalone bank, we have revised the stock beta from 0.7 to 0.6 in the two-stage Gordon Growth model. We feel the revision in beta is warranted since there is better visibility on growth in the medium term. We arrive at a target 1-year forward P/Adjusted BV multiple of 3.8x, as against the earlier multiple of 3.5x, implying a 9% premium to its 15-year historical average trading multiple. Assuming the PER multiples and the value of subsidiaries remains unchanged, our new target price for HDFCB group works out to Rs2,900 (from Rs2,650 prior).”

Hence, let the cricket spirit envelop you even as you eye money making opportunities on markets!