“Violence in the state capital and other parts of Karnataka has severely dented the image of Bengaluru as Silicon Valley of India, home to almost all the Fortune 500 companies,” said ASSOCHAM while making a fervent appeal for peace in both Karnataka and Tamil Nadu. 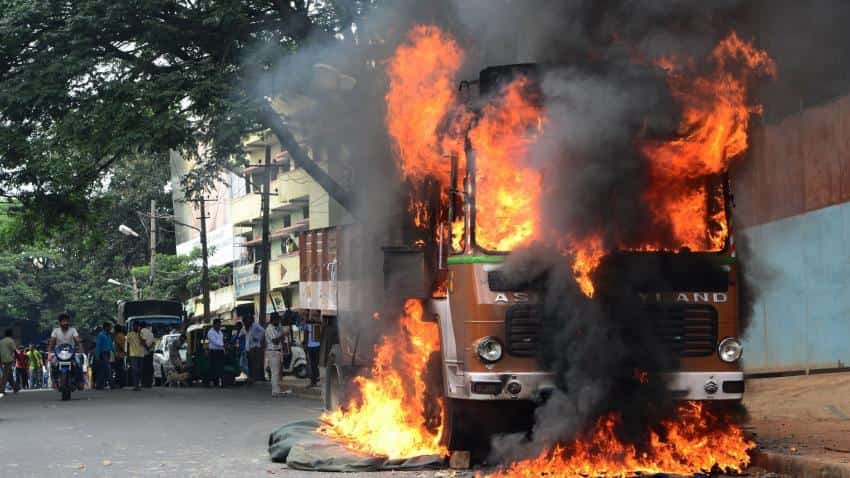 Cauvery water dispute has vigourously teared down the image of Bengaluru aka the India's 'Silicon Valley' brick-by-brick.

The damage to the  vital urban infrastructure, interruption in the transport including, roads, rail and air and inability of the workforce to safely move to and from offices and factories, Karnataka , especially in Bengaluru city, is estimated to have suffered a loss between Rs 22,000-25,000 crore, said a Assocham report.

“Violence in the state capital and other parts of Karnataka has severely dented the image of Bengaluru as Silicon Valley of India, home to almost all the Fortune 500 companies,” said ASSOCHAM while making a fervent appeal for peace in both Karnataka and Tamil Nadu.

The city of Bengaluru is a spine of India's almost $60.5 billion outsourcing industry and has chalked down a name for itself as the "technology hub of the East.

Looking at the angry crowds way of damaging parts of Bengaluru,has demoralized  the business and industrial community, particularly in the capital city of Karnataka.

D S Rawat secretary general of Assocham said, “The authorities in Karnataka and Tamil Nadu should not allow under any circumstances the law and order to be compromised. While the water is a basic requirement and an emotional issue, the situation is being exploited by miscreants, scaring away the peace loving workforce which has settled in both Bengaluru and Chennai from all over the country and even abroad.”

Considering the current image of Bengaluru, Assocham expplained that the widespread loss would accrue to IT and ITES facilities due to poor attendance for the last several days. Besides, the inter-state tourism, particularly involving pilgrims, domestic travellers, has also been affected badly, which has horrified people to even enter the city.

Cancellation of air tickets have also been reported to and from Bengaluru.

Many airlines have decided to waive off flight cancellation or change in fees for a specifice time period.

"As a result, all these losses would run between Rs 22,000 crore and Rs 25,000 crore, besides of course immense damage to the goodwill of the state as an attractive investment destination,"said Assocham.

Assocham has also urged the Centre to effectively monitor the situation and ensure that peace is restored in the two states. “A lot of damage has already been done to the trade and factory output with movement of the vehicles hit by the agitation which is taking violent shape. There is a huge stake for the country’s showpiece information technology in both Bengaluru and Chennai.”

The strikes and bandhs should not be allowed to take violent shape and the law and order machinery should be geared up well in advance, with good amount of intelligence gathering, it said.

“While we are selling ourselves to be the fastest growing economy of the world, we cannot afford the incidents which are taking place in the metropolitan cities. After all, the two states had built with a lot of hard work image of progressive areas, which should not be compromised at any cost.”

The Kaveri or Cauvery  is a large Indian river, originating at Talakaveri, Kodagu in Karnataka. It flows generally south and east through Karnataka and Tamil Nadu and across the southern Deccan plateau through the southeastern lowlands, emptying into the Bay of Bengal through two principal mouths in Poompuhar, Tamilnadu.

Silicon Valley of India has moved from delivering volume based work to IT, ITES, KPO and other technology related services.

With over 25 years of experience in outsourcing, Bangalore is the only city in the world that offers global technology companies a unique combination of talented resources, large network of vendors and partnership opportunities.