Kavinder Singh, MD & CEO, Mahindra Holidays and Resorts India Limited, speaks about the transition from old accounting standards to Ind AS 115, occupancy rate and new locations that will be added to the list among others during an interview with Zee Business. 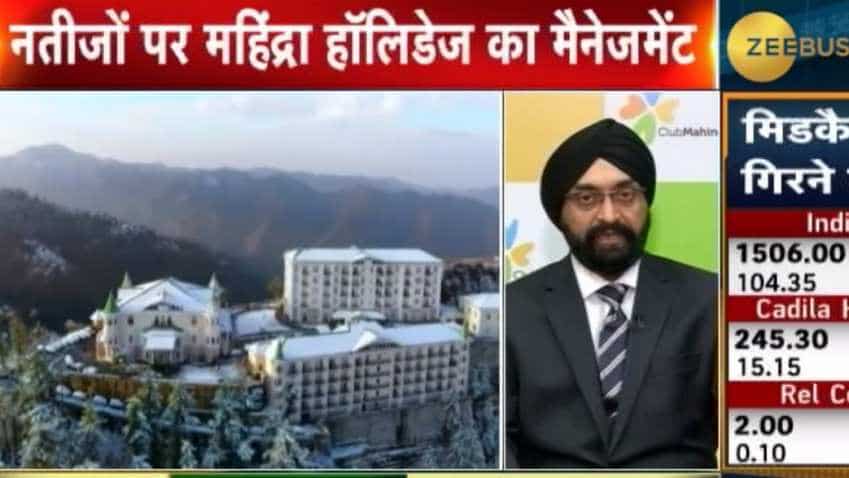 Kavinder Singh said that three new locations were added to our list in the fourth quarter. Image source: Zee Business

Kavinder Singh, MD & CEO, Mahindra Holidays and Resorts India Limited, speaks about the transition from old accounting standards to Ind AS 115, occupancy rate and new locations that will be added to the list among others during an interview with Pooja Tripathi, Zee Business. Excerpts:

Q: Your margins have fallen drastically. What can be the reason for this fall?
A: Our margins haven’t reduced but have gone up, but it seems that there is a fall in the margin and it is a result of our transition into the Indian Accounting Standard (Ind AS) 115. We transitioned into the new system in April 2018. Going by the old accounting standard, our profit before tax margin stands at 23.7 per cent in the fourth quarter and 20.6 per cent in the complete year. Interestingly, this is one of the best ever margin of Mahindra Holidays since I am looking after it. However, you are comparing the profit margins of the old accounting standards with the margins of the new accounting standard.

Now, I will like to throw some light on the changes that have been introduced in the New Accounting Standard and what has happened due to it. As you are aware that we sell membership for 25year and under the old accounting process, we used to take 60 per cent upfront income and the rest 40 per cent was taken in 25 years. But the new accounting standard has changed the process under which we can take just 4 per cent of upfront income in a year. In the process, the 25 year product is divided by 100, which means we will earn just 4 per cent income in a year. Since the income is low and the cost remains the same but can be differed a bit to the levels that were incurred while taking the contract.

So, cost referral is low and income reduction is high and this is something that creates a situation where profit and profit margins seem to be low. But, this is not a real reflection of our business. There is good news that I want to share with your viewers and it is that the income of this quarter and the complete year differs and will reach us later. So, this deferral income will reach us every quarter without any incremental cost and thus, it will increase our profitability because it reaches us without any cost because it has been differed or pushed back.

Q: How many new vacation ownership members will be added in Q1FY20?
A: As far as vacation ownership business is concerned I would like to say that we are in a business where one should have to look into the quarter to quarter membership addition. As the same time, we should also have an eye on the size of the cumulative membership base because they provide annual fees to us and interest from those who have bought our product on an EMI basis. In addition, we also earn from food and beverages. Thus, one can’t get a clear picture of our business just by seeing the membership addition on a YoY basis. So, I would request you to have an eye on the cumulative growth of our business. Cumulative growth means total membership growth and we get our annual fees and resort income from the same.

So, our total income is based on total member base. And, when it comes to your question related to membership addition than we have added 5671 members in the last quarter, which is 42 per cent growth on a sequential basis, and 18,377 members were added throughout the year. As far as the future is concerned, the first quarter remains good for us and we will try to increase this number and take it forward. But, we will have to keep one thing in the mind and that is that we should focus on acquiring new members with higher down payment and EMI tenure so that we can offer good experience at our resorts to them and there is a simultaneous increase in resort income. It is so because we have seen that the higher-down payment members help in increasing the consumption of the resorts.

Q: Tell us about the occupancy rate in the last holiday season and your outlook for the first quarter of fiscal 20?
A: As far as occupancy is concerned then the whole year’s occupancy was quite good for us and it stood at 83 per cent and it went up to 84 per cent in the last quarter. However, you are aware that we faced certain challenges during the second quarter in Kerala and Coorg due to floods. Floods had an impact on occupancy levels.

Secondly, the first quarter always remains good for us, in terms of occupancy, as it crosses almost 85 per cent mark in the season and it stood at around 89 per cent in the last fiscal. We are looking the same this time too. We don’t face problems related to occupancy. In fact, we are a company whose occupancy always remains above 82-83 per cent. In addition, we are a hospitality company with zero (0) debt. I would like to inform you that our cash and cash equivalents (CCE) has reached around Rs572 crores. So, if you have a look at our business then you will find that profitability, cash and member satisfaction is too high at our end.

Q: Update us on the locations and resorts that were added to your list in FY19 and expected additions of FY20?
A: Three new locations were added to our list in the fourth quarter and they are Hampi, Karnataka, Diu and a location near Ahmedabad, which lies at a travel distance of around one and a half hours. Overall, six locations were added to the list across the year. Similarly, we will also increase our location and resorts in FY20 at different places including Ashtamudi project, Kerala and it will be added in the first quarter itself and it will add 56 rooms in our existing resort.

We are also developing a 200-room resort in Goa and about 150-room of the resort will start functioning by the third quarter or the start of the fourth quarter of this fiscal. Besides, we keep looking for resorts that are available on a long-term lease with rights to refurbish in accordance to our need and run them. We also like acquiring resorts with India as well as the international destination. At the same time, I would like to inform that we have 33 resorts in Europe and they belong to a European company that was acquired three years back from here. So, we have 61 resorts and 33 more are available with us. And, we will be adding more resorts and are confident several new resorts will be added to the list by end of this fiscal.