Two-wheeler BS III inventory in dealerships in urban areas have been sold out by today. 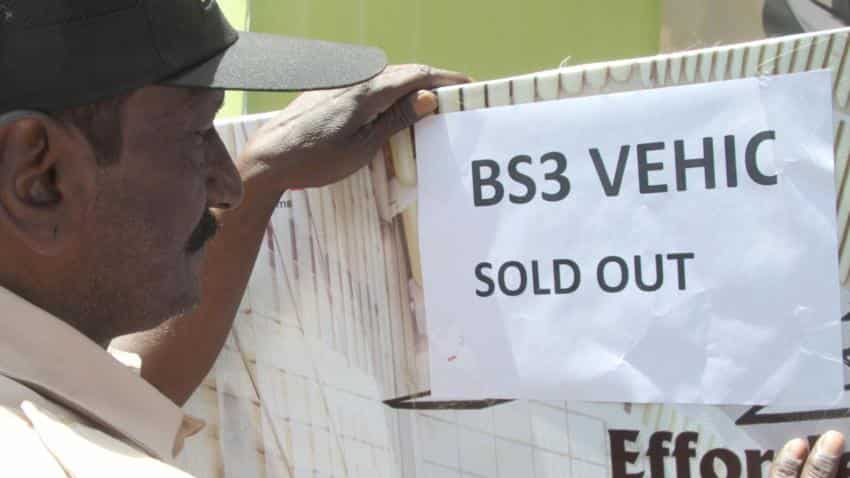 eople in large numbers outside a 2 Wheeler showroom to buy discounted vehicles after the BS III vehicles ban on sale and registration of vehicles from 1st April 2017 and the vehicles which do not meet the new standards, in Bengaluru. Photo: IANS
Written By: Collin Furtado
RELATED NEWS

It seems that two-wheeler companies have managed to achieve an almost impossible task in just two and half days. Two-wheeler manufacturers have managed to sell almost the entire of their 6.71 lakh units of unsold Bharat Stage (BS) III inventory within this short span of time. What clearly seems to have worked in their favor is the huge discounts of up to Rs 24,000 on BS III vehicles. These even made some bikes cheaper than some smartphones.

According to information received from dealerships and automobile analysts the Zeebiz team spoke to, dealerships largely in urban areas have managed to sell off whatever pending stocks of two-wheelers they had remaining.

While John Paul, President of Federation of Automobile Dealers Association (FADA) a day earlier (on March 30) was apprehensive of that two-wheeler companies and dealerships will be able to sell off the entire stock of BS III two-wheeler vehicles, however on Friday he confirmed with the Zeebiz team that two-wheeler BS III stocks have been sold out.

“Two-wheeler BS III stocks at dealerships in urban areas and large cities have been sold out. The large discounts of over 20% offered by the two-wheeler companies have helped in driving demand. In fact, I have received photos of dealerships closed and people still queued outside them to see if they can buy a two-wheeler,” Paul said.

He added, “I cannot confirm with you right now whether it is 80-90% of the unsold inventory, but a large portion of the stocks at dealerships in urban areas has been sold out. Two-wheeler companies had decided to offer huge discounts on their vehicles as they thought it was better to take a small hit than suffer a huge loss if they weren’t.”

He further said that the dealerships have made the invoices and insurance of the buyers and will do the registration later, as the Supreme Court has allowed for the registration of BS III vehicles after April 1.

When questioned whether these were authentic buyers or were just sales created by dealerships to sell it in the unorganised two-wheeler resale market, he said that these were indeed real buyers as he has received photos of the buyers along with other details of the buyer.

Just a day back the Zeebiz team spoke with Paul to check on the impact to dealerships due to the apex court verdict and if automobile companies were doing anything to mitigate the impact on dealerships. However, when asked whether it was possible for dealerships to sell their stock of BS III vehicles he said, “I don’t think so it is possible to sell all to sell the inventory so soon. If this was something which was known two weeks back, it would be possible. There will be some buyers but there is definitely not going to be a huge increase in sales in the next 2 days.”

He further said that he had spoken with the Society of Indian Automobile Manufacturers (SIAM) President who had said that they will sit down with FADA and find a solution which will not impact dealerships. “We will be sitting with SIAM in the next few days and come up with a solution that will not hurt dealerships,” Paul had said.

After the Supreme Court (SC) verdict on March 29 banned the sale of BS III emission norm vehicles after the March 31 deadline, several large automobile companies were faced with a large inventory of vehicles that could not be sold from April 1. This left them with just over two days to sell the inventory or seek out other options such as exports to other countries with lower emission norms or changing the engines to meet BS IV standards before selling, which is a very expensive option.