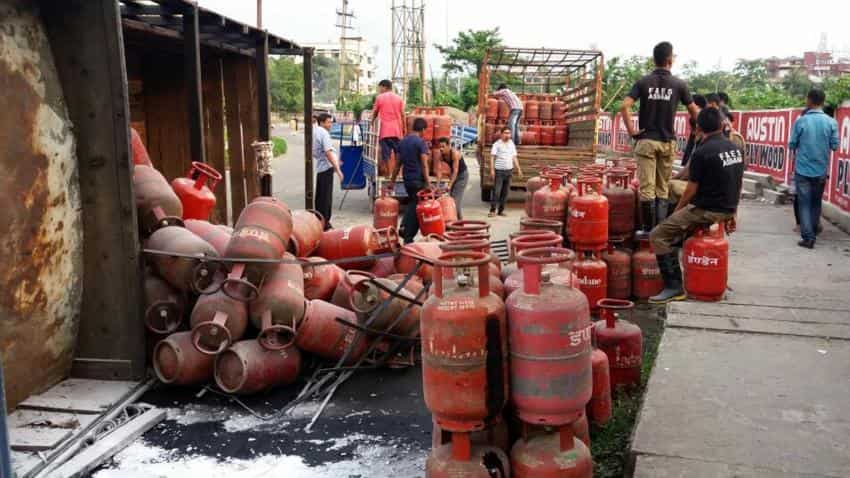 LPG consumption is growing by over 10 % and private refiners RIL and Essar Oil want a pie of it. Representational image. Image Source: IANS
Written By: PTI
RELATED NEWS

LPG consumption is growing by over 10 % and private refiners RIL and Essar Oil want a pie of it.

34 bottles of 5-kg per year to households on subsidised rates and any requirement above that on market price. The 19-kg cylinder is for commercial use.

Private firms are not entitled for government subsidy and they have to sell fuel at market price. But with the government restricting volume of subsidy as well as barring consumers earning more than Rs 10 lakh per annum from subsidised LPG, a ready-made market is now available for private oil companies.

"Mobile App rolled in all operating states to enhance customer experience," RIL said in the presentation.

The company sells most of the LPG produced by its twin refineries at Jamnagar in Gujarat to public sector retailers.

While RIL did not disclose the price at which it is marketing the 4-kg cylinder, a 5-kg subsidised domestic LPG cylinder costs Rs 158.50 in Delhi. A 5-kg cylinder for domestic use is priced at Rs 181 while it costs Rs 252.50 for non-domestic use.

Domestic LPG consumption rose 10.8 % in April-September this year to 10.2 million tonnes, nearly half of which was imported.

The government had last year permitted RIL to sell up to 1.2 lakh tonnes of LPG produced at its plants to private cooking gas marketers.

The LPG Control Order mandates that all cooking gas (LPG) produced locally must be supplied to state-run fuel retailing companies as India is deficient in LPG and has to import a part of the requirement.

However, under the Parallel Marketing Scheme (PMS), private companies are allowed to import and market LPG to bulk consumers.

On its aviation fuel business, RIL said ATF sales volume grew 31 % in second quarter and it has "leading market share at 10 out of 25 airports where it operates."