There are 10 companies like Nestle, PepsiCo, Coca-Cola, Unilever, Danone, General Mills, among others that control majority of what you buy from food and beverage brand. 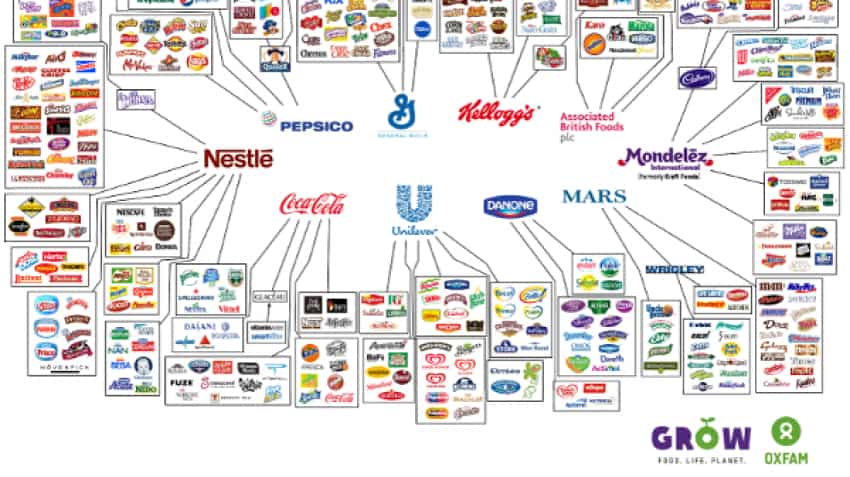 In 2016, among all the 10 consumer brands, Nestle clocked revenue of $90.2 billion followed by PepsiCo at $62.8 billion and Unilever at $48.3 billion. Representational Image. Image Source: Oxfam
Written By: ZeeBiz WebTeam
RELATED NEWS

Whatever you buy from large food and beverage brand majority of them are controlled by 10 companies like Nestle, PepsiCo, Unilever, among others, Business Insider reported.

According to the report,  these 10 companies are Nestle, PepsiCo, Coca-Cola, Unilever, Danone, General Mills, Kellogg's, Mars, Associated British Foods, and Mondelez - each employ thousands and make billions of dollars in revenue every year, the report said.

In order to help customers to realise who controls the brands they are buying, the report further citing Oxfam infographic has published information on how interconnected consumer brands really are.

1. Kellogg's
In 2016, Kellogg's recorded revenue of $13 billion. The company owns brands like Forget Froot Loops and Frosted Flakes including non-cereal brands like Eggo, Pringles, and Cheez-It, the report said.

2. Associated British Foods
This British company owns brands such as Dorset Cereals and Twinings tea, as well as the retailer Primark. It clocked a revenue of $16.8 billion in 2016.

3. General Mills
General Mills is best known for cereals like Cheerios and Chex, but it also owns brands like Yoplait, Hamburger Helper, Haagen-Dazs, and Betty Crocker, the report said. It recorded revenue of $16.6 billion in 2016.

5. Mondelez
According to the report, the snack-centric company's brands include Oreo, Trident gum, and Sour Patch Kids and it clocked revenue of $25.9 billion in 2016.

6.Mars
Mars known for chocolate brands, such as M&M, but it also owns Uncle Ben's rice, Starburst, and Orbit gum. It has recorded a revenue of $35 billion in 2016.

7. Coca-Cola
Coca-Cola is moving beyond soda, with beverage brands including Dasani, Fuze, and Honest Tea. The company recorded $41.9 billion revenue in 2016.

9. PepsiCo
In addition to Pepsi and other sodas, PepsiCo also owns brands such as Quaker Oatmeal, Cheetos, and Tropicana. The company clocked revenue of $62.8 billion in 2016, cited the report.

10. Nestle
Brands you may not have known that Nestlé owns include Gerber baby food, Perrier, DiGiorno, and Hot Pockets — plus, of course, candy brands including Butterfinger and KitKat, the report said. It registered a revenue of $90.2 billion in 2016.