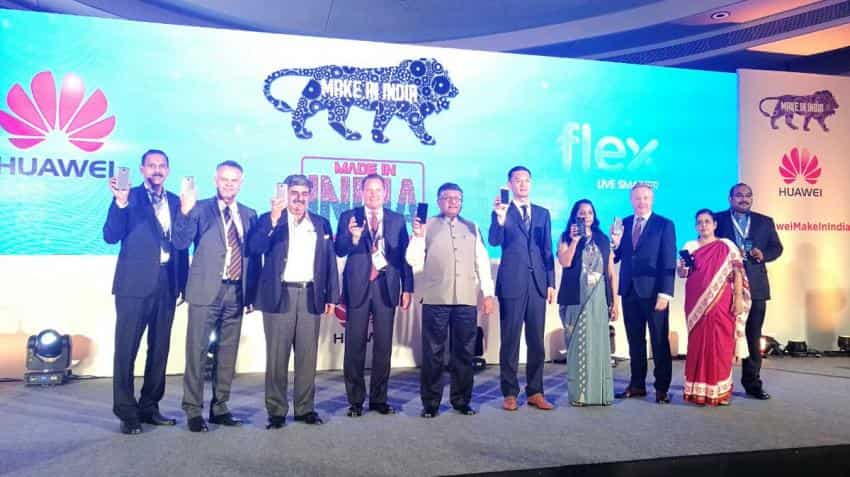 Union Minister for IT, Law and Justice Ravi Shankar Prasad made the announcement at Huawei’s ‘Make in India’ inaugural ceremony in New Delhi on Friday.

The company will start producing 'Make in India' Honor smartphones models from Flextronics International's (Flex) manufacturing plant in Chennai from the first week of October this year, Huawei said in press release.The plant will have the capacity to make three million units by the end of 2017.

Flextronics International (Flex) is the sketch-to-scale solutions provider that designs and builds intelligent products for a connected world.

Huawei’s latest manufacturing initiative is a part of its commitment to the government's ‘Make in India’ vision by harnessing local talent, coupled with the infusion of hi-tech research and development (R&D) expertise and knowledge into the country.

Meanwhile, the company has tweeted the photo of the event wherein it unveiled the logo of its commitment to the government's 'Make in India' campaign:

Here we reveal the logo for Huawei’s commitment to @makeinindia #HuaweiMakeInIndia pic.twitter.com/3iN4iRrxm7

"I would like to congratulate Huawei on their commitment to pursue their ‘Make in India’ vision. The Government of India is pleased to see so much enthusiasm for our 'Make in India' initiative. We are working towards making India an electronic manufacturing hub,” said Union Minister for IT, Law and Justice Ravi Shankar Prasad while making an announcement at the Huawei's event.

“This is an opportune time to start manufacturing from India. The smartphone landscape in India is growing every day and such initiatives by technology leaders will help accelerate the growth of local manufacturing industry in India,” Prasad added.

The company firmly believes in India's economic growth potential and looks forward to opportunities inorder to increase its presence in the country.

Speaking on the event, Huawei India chief executive officer Jay Chen said, “We recently launched our world class Global Service Center (GSC) in Bengaluru and the start of manufacturing in India is an affirmation of our commitment to India and supports the 'Make in India' campaign. We are convinced about the growth potential and future of India and we will keep looking for opportunities to increase our presence here.”

Huawei India Consumer Business Group president Peter Zhai said, “We have been evaluating a manufacturing unit for a long time and have partnered with Flex given their legacy, expertise and knowledge in providing sketch-to-scale solutions to leading companies globally.”

On the partnership with Huawei, Flex has said that it is a testament of its commitment towards boosting local manufacturing.

Commenting on the occasion, Flex Telecom segment head Jeff Reece said,  “We are thrilled to expand our global partnership with Huawei. Our alliance with Huawei in India is a testament of our commitment towards boosting local manufacturing. It also further demonstrates our commitment to bring innovative supply chain solutions, high-quality advanced manufacturing and after-market services to Huawei and ultimately the consumers.”

For Huawei, India is a significant market and it has renewed its focus on the country by working with two brands-Huawei and Honor- to cater to the widest cross section of consumers.

The company will strengthen its after sales services in India with over 200 service centers including more than 30 exclusive Huawei service centers in the country. Moreover, Huawei Consumer Business Group will also expand its distribution network by partnering with more than 50,000 retail outlets by the end of 2016.