Higher ticket cars and bikes increasingly seem to breaking away and steering growth of automobile companies. 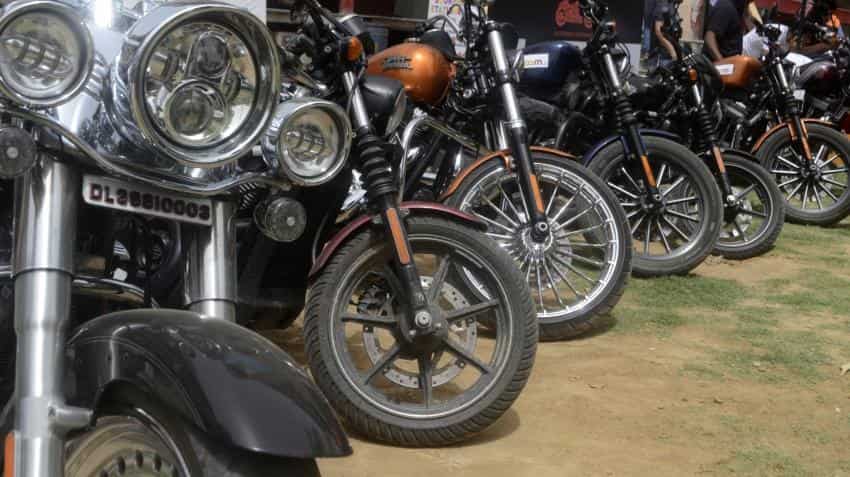 Bikes parked at at Qutub Plaza where Droom and Uber have launched a campaign to give free Super bikes rides to riders in Gurugram on April 7, 2017. Photo: Zuhaib Mohammad Khan/ IANS
Written By: ZeeBiz WebTeam
RELATED NEWS

The big ticket automobile segments seem to be breaking away and rising in popularity. Sales of premium bikes, scooters and cars seem to be selling at a faster pace, according to an Edelweiss report.

Higher price vehicles of automobile companies such as Royal Enfield, Maruti Suzuki and Honda Motorcycle & Scooters (HMSI) seem to breaking away from the pack.

Royal Enfield for instance has been seeing continued high growth in sales. In May it posted a 25% year on year (YoY) spurt in growth.

Royal Enfield continued its high growth trajectory as it sold 60,696 units in May 2017 in comparison to 48,604 units during the corresponding month last year.

The two-wheeler company saw a high growth in motorcycle models with the engine capacity of up to 350cc. The sales of below 350cc Royal Enfield motorcycles grew by 29% as sales rose to 55,823 units during May 2017 in comparison to 43,217 units sold in May 2016.

The report says that even with Maruti Suzuki and Honda Motorcycles have seen growth in high ticket segments.

This was seen in Maruti Suzuki as it's utility vehicle (UV) segment mainly contributed to its 15.5% growth during the month of May. It's UV segment, which comprises of models such as Ertiga, S-Cross and Vitara Brezza, sales rose by 66.3% during the month. The segment sold 22,608 units in May 2017 from 13,596 units in the same month last year.

Honda Motorcycles posted a 19% growth in sales in May. The company accounted for almost half of the incremental rise in two-wheeler sales in the country in May.

The reason for this growth higher-ticket segments is that the growth in cars and bikes has been more urban than rural. The demand for scooters has been up 20% and passenger vehicles up 10% in urban areas, said the report.

However, rural sales are seeing a recovery but much slowly. “With strong agriculture growth (Q4FY17 GDP: 5.2%) and optimism on monsoon, we are more sustainably optimistic. While the overall momentum is only in line with expectations, broadening growth drivers are cushioning growth expectations,” said the report.