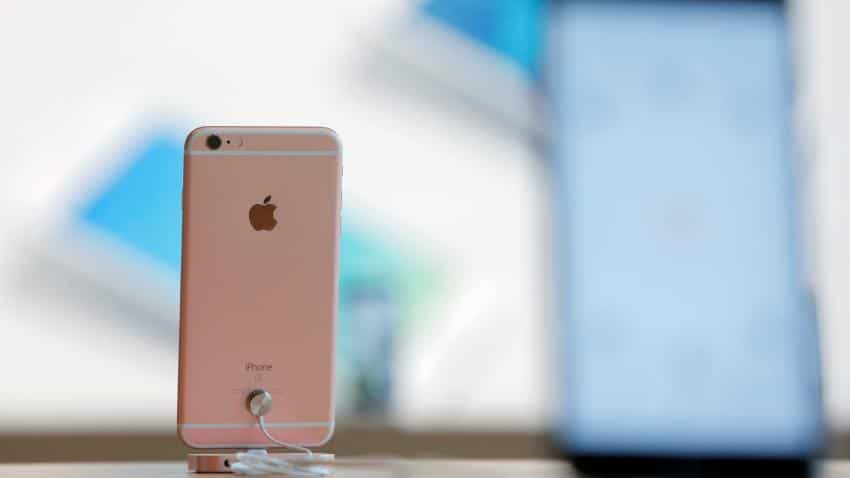 iPhones sit on display during a preview event at the new Apple Store Williamsburg in Brooklyn, US. Photo: Reuters/Andrew Kelly
Written By: ZeeBiz WebTeam
RELATED NEWS

Smartphone makers sold over 340 million phones in the second quarter of this year, registering a growth of mere 0.3%. Apple remains an outlier.

Out of the top five smartphone companies Apple was the only one to post a decline in its market share. The Cupertino-based company saw a large 15% year-on-year decline as iPhone shipments dropped to 40.4 million from 47.5 million units last year.

The smartphone shipments sequentially too saw a low growth of 3.1% from 333.1 million in the first quarter of 2016.

The reason for this, the report said, is this. Second quarter for Apple is seasonally its lowest of the year as consumers hold off on purchases in anticipation of the next big launch in the third quarter.

Rumours are already ripe with iPhone 7 or iPhone 6SE.

Nonetheless, it was Apple's lowest quarterly volume in nearly two years, despite the mid-cycle introduction of the iPhone SE. Even strong sales of iPhone SE in both established and emerging markets could not help Apple post better sales.

As smartphone competition continues to escalate and upgrades continue to slow, Apple will look to drive sales with a newly designed iPhone 7 combined with their upgrade program come this fall, said the report.

Samsung remained on top as the market leader in smartphones with a 5.5% year-on-year growth as shipments rose to 77 million from 47.5 million in the same period last year. This was largely due to the success of its flagship smartphone the new Galaxy S7 and S7 Edge.

The inclusion of removable storage, waterproofing, and faster processor proved to be the winning combination for Samsung as consumers flocked to the new model. Outside of the S7, the J-Series performed well in both developed and emerging markets thanks to refreshed models (J7, J5, J3) which offer something for everyone at various sizes and price points, said the report.

“Look for the pending arrival of the Note 6/7, coming later this year, to challenge Apple's latest and greatest,” the IDC report added. Giving a hint that Apple's iPhone 7 could face some challenge.

However, it was Chinese smartphone brands that stole the show during this quarter too. Oppo mobiles saw the maximum growth in terms of shipments during the quarter followed by Vivo and Huawei.

Oppo, while at No. 4 spot, continued with its aggressive marketing and advertising in 2Q16, especially for its flagship R9 device, which helped it see good sales in the quarter. The company smartphone shipments grew by 136.6% year-on-year. The key model for Oppo will be the R9, which right now is its top shipping model.

Huawei captured the third position once again thanks to strong domestic sales and even stronger European sales. The increase in these two regions contributed to shipments totalling 32.1 million units, up 8.4% from last year. Huawei's premium lineup of phones, like the new P9 and Mate 8 handsets, also pushed 25% of the quarter's volume to the high-end (priced $500-$600).

Vivo at No. 5 spot saw an impressive 80.2% year-on-year change in its volumes. At the time, vivo is still 100% focused on Asia/Pacific, with the vast majority of volume still in China. vivo had several new product launches in China during the second quarter, including the V3 and V3 Max.

"Chinese brands such as Huawei, OPPO, vivo, and Xiaomi have witnessed success with this strategy by shipping premium styled devices that focus on the features that matter most to consumers, such as imaging, sound quality, and design,” saidAnthony Scarsella, research manager, Mobile Phones, IDC.