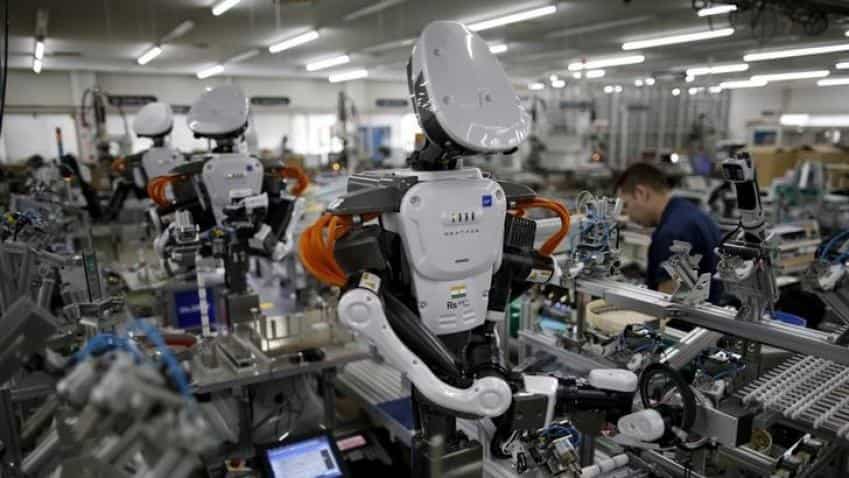 Humanoid robots work side-by-side with employees in the assembly line at a factory of Glory Ltd., a manufacturer of automatic change dispensers, in Kazo, north of Tokyo. Image Source: Reuters
Written By: Reuters
RELATED NEWS

Japanese manufacturing activity showed signs of steadying in August as output rose for the first time in six months, in a tentative sign that the economy may be recovering from a slump earlier this year, a private survey showed on Tuesday.

The IHS Markit/Nikkei Japan Flash Manufacturing Purchasing Managers' Index (PMI) edged up to 49.6 in August from a final 49.3 in July on a seasonally adjusted basis.

The headline index remained below the 50 threshold that separates contraction from expansion for the sixth month, but the rate of decline was slight.

The index for output rose to a preliminary 50.6 from 49.4 in the previous month. While marginal, that would indicate the first increase since February if confirmed in revised data.

However, new orders and export orders still declined at a significant rate, forcing Japanese manufacturers to cut prices of their goods at the sharpest pace since October 2012 to attract new business.

Japan's economic growth stalled in the second quarter (Q2) as consumer spending slowed and exports contracted due to weak external demand and the impact of a stronger yen.

The cabinet this month announced an economic package with 13.5 trillion yen (nearly $133.96 billion) in fiscal measures, hoping it would help the economy deflect external headwinds and sustain a moderate recovery.

The package focuses heavily on building new infrastructure, which could support capital expenditure and factory output next year, once various construction projects get under way, some economists say.