A flight path directly from Earth to the moon would cover roughly 240,000 miles (386,242 km), but Beresheet will follow a more circuitous route. 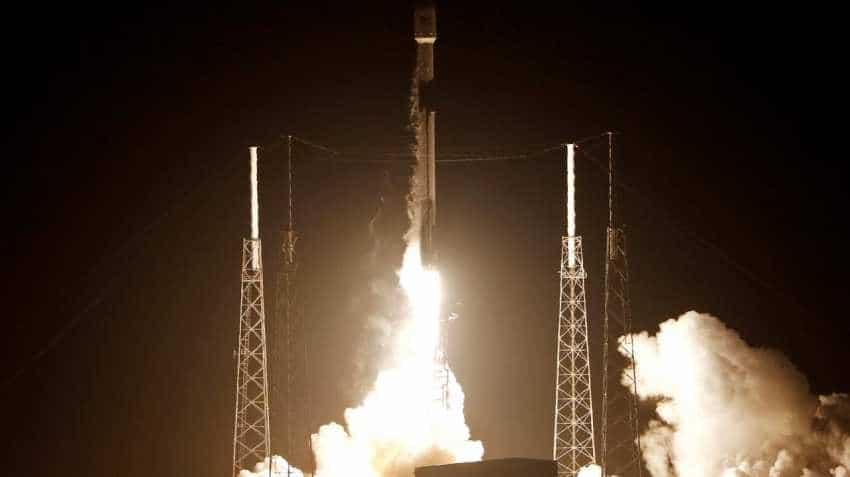 So far, only three other nations have carried out controlled "soft" landings on the moon - the United States, the former Soviet Union, and China. Reuters

A SpaceX Falcon 9 rocket blasted off from Florida on Thursday night carrying Israel`s first lunar lander on a mission that if successful will make the Jewish state only the fourth nation to achieve a controlled touchdown on the moon`s surface. The unmanned robotic lander dubbed Beresheet - Hebrew for the biblical phrase "in the beginning" - soared into space from the Cape Canaveral Air Force Station at about 8:45 p.m. EST (0145 GMT Friday) atop the 23-story-tall rocket.

Beresheet, about the size of a dish-washing machine, was one of three sets of cargo carried aloft by the Falcon 9, part of the private rocket fleet of billionaire entrepreneur Elon Musk`s California-based company SpaceX. The rocket`s two other payloads were a telecommunications satellite for Indonesia and an experimental satellite for the U.S. Air Force.

Beresheet was jettisoned into Earth orbit about 34 minutes after launch, followed 15 minutes later by the release of the two satellites, according to a SpaceX webcast of the event. In addition to a textbook launch and payload deployments, SpaceX scored yet another success in its pioneering technology for recycling its own rockets.

Just minutes after blastoff, the Falcon 9`s nine-engine suborbital main-stage booster separated from the upper stage, flew back to Earth and landed safely on a drone ship floating in the Atlantic Ocean more than 300 miles (483 km) off the Florida coast.

As seen from the launch site, the distant glow of the returning booster rocket was visible in the sky just as the moon appeared over the horizon. The spectacle drew cheers from mission control engineers.
The encouraging moment came on the eve of a key hurdle for SpaceX to clear in the company`s quest to help NASA revive its human spaceflight program.

On Friday, NASA is expected to decide whether to give its final go-ahead to SpaceX for a first, unmanned test flight on March 2 of a new capsule the company designed for carrying astronauts to and from the International Space Station.

FROM EARTH TO THE MOON
Beresheet is slated to reach its destination on the near-side of the moon in mid-April following a two-month journey through 4 million miles (6.5 million km) of space. A flight path directly from Earth to the moon would cover roughly 240,000 miles (386,242 km), but Beresheet will follow a more circuitous route.

If all goes according to plan, the spacecraft`s gradually widening Earth orbit will eventually bring the probe within the moon`s gravitational pull, setting the stage for a series of additional maneuvers leading to an automated touchdown. So far, only three other nations have carried out controlled "soft" landings on the moon - the United States, the former Soviet Union, and China.

Spacecraft from several countries, including India`s Moon Impact Probe, Japan`s SELENE orbiter and a European Space Agency orbital probe called SMART 1, have intentionally crashed on the lunar surface. The U.S. Apollo program tallied six manned missions to the moon - the only ones yet achieved - between 1969 and 1972, with about a dozen more robotic landings combined by the Americans and Soviets. China made history in January with its Chang`e 4, the first to touch down on the dark side of the moon.

Beresheet is designed to spend just two to three days using onboard instruments to photograph its landing site and measure the moon`s magnetic field. Data will be relayed via the U.S. space agency NASA`s Deep Space Network to SpaceIL`s Israel-based ground station Yehud.

At the end of its brief mission, mission controllers plan to simply shut down the spacecraft, according to SpaceIL officials, leaving Beresheet as the latest piece of human hardware to litter the lunar landscape.

SpaceX Inspiration4 LAUNCH: How can you be PART of THIS JOURNEY? Check OBJECTIVE of the mission, crew and all you NEED to KNOW