The G-20 Summit meeting is slated for June 28 and 29. China is flexing its muscles in the South China Sea (SCS) which serves as a passage for annual trade worth USD 3.5 trillion. 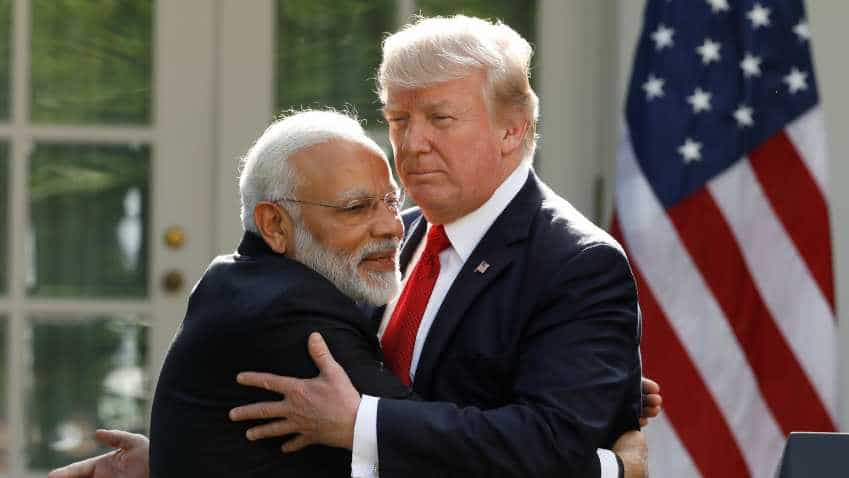 The US and India have made enormous strides together which include the expansion of bilateral defence cooperation and combined military exercises, the historic civil nuclear deal. Image source: Reuters

US President Donald Trump and Prime Minister Narendra Modi Friday agreed to meet at the G-20 Summit in Japan next month as both the leaders pledged to further strengthen the US-India strategic partnership and build on the achievements of the last two years. Trump telephoned Modi to congratulate him on the historic electoral victory in the Lok Sabha polls, the White House said.

Prime Minister Modi on Thursday led his Bharatiya Janata Party to a landmark victory for a second five-year term in office, winning 302 seats in the 543-member Lok Sabha. "The leaders look forward to seeing one another at the G-20 Summit in Osaka, where the US, India, and Japan will hold a trilateral meeting to pursue their shared vision for a free and open Indo-Pacific," the White House said.

The G-20 Summit meeting is slated for June 28 and 29. China is flexing its muscles in the South China Sea (SCS) which serves as a passage for annual trade worth USD 3.5 trillion. The US and China are locked in a tussle for the commercial control of the SCS.

China claims almost all of the strategic SCS with Brunei, Indonesia, Malaysia, the Philippines, Taiwan and Vietnam pushing competing claims to parts of the resource-rich maritime region. The US, Japan and India do not have any territorial claims there.

The US and India have made enormous strides together which include the expansion of bilateral defence cooperation and combined military exercises, the historic civil nuclear deal, the nearly six-fold increase in
US-India trade, the Defence Technology and Trade Initiative and the designation of India as a Major Defence Partner.

Later speaking to reporters at the South Lawn of the White House before boarding Marine One on his way to Japan, Trump said, "I just spoke to Prime Minister Modi and I gave him my warmest regards and congratulations.

"I just conveyed congratulations on behalf of our country, myself and everybody. He had a great election win. He is a friend of mine. We have a very good relationship with India".

The White House said that the President and Prime Minister pledged to continue to strengthen the United States-India strategic partnership, building on the achievements of the last two years.

Earlier on Thursday, congratulating Prime Minister Modi on his "BIG" election victory on Twitter, Trump said that "great things" are in store for the Indo-US strategic ties under his second innings.

"Great things are in store for the US-India partnership with the return of PM Modi at the helm. I look forward to continuing our important work together!" Trump had said.

Modi had responded saying, "I too am looking forward to working closely with you for closer bilateral ties, which also augur well for global peace and prosperity."

The PM had also thanked US Vice President Mike Pence, who congratulated him saying he looked forward to working with India.

"Thank You @VP. This is a victory of democracy, which India and the US cherish. I will continue to promote our partnership with the US for peace and shared prosperity for our two countries and the world," Modi tweeted Friday.