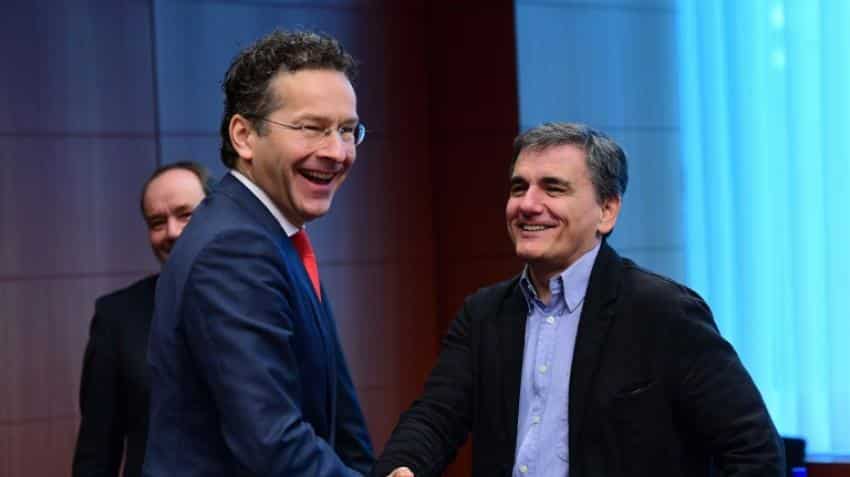 "The Eurogroup endorsed today the full set of short-term measures," including extending the repayment period and an adjustment to interest rates, the eurozone`s 19 finance ministers said in a statement. Image Source: AFP

Eurozone finance ministers on Monday approved new debt relief measures to alleviate Greece`s colossal debt mountain in the wake of its huge 86-billion-euro bailout, but at levels far short of those demanded by the International Monetary Fund (IMF).

"The Eurogroup endorsed today the full set of short-term measures," including extending the repayment period and an adjustment to interest rates, the eurozone`s 19 finance ministers said in a statement.

The ministers accorded Athens the small measures to reduce Greece`s debt as a reward for completing the latest round of reforms demanded in the country`s massive bailout programme -- its third since 2010.

"We will start implementing them in the next weeks," said Klaus Regling, the head of the European Stability Mechanism, the eurozone`s bailout fund.

However, the ministers refused to officially sign off on the bailout`s second review as expected, telling Athens that there still remained a few open questions on Greece`s reform efforts.

The talks were marred by a row with the International Monetary Fund (IMF), as Europe and the fund remain as far apart as ever on the level of need for debt relief measures and the economic targets being required of Greece, which the IMF says are unsustainable.

This is crucial as the fund has remained adamant that it will not support a program unless the elements, including debt sustainability and the fiscal reforms needed to achieve the surplus target, are credible.

The hardline stance on debt relief by the ministers, led by Germany`s powerful Wolfgang Schaeuble, comes as key elections approach next year in Germany and the Netherlands, where bailout fatigue is running rife with voters.

The IMF played a major part in two earlier rescues for Greece, but balked at the third one for 86 billion euros in 2015 because it said Athens would never get back on its feet unless its mountain of debt was cut outright.

The so-called "short-term" measures announced by the ministers crucially do not include reduction of the face value of the debt, an idea that is firmly opposed by the eurozone governments.

Instead, the highly technical measures include extending maturities on certain loans and locking in the interest rate on some debt that risks future interest-rate increases.

"It`s very important for all sides, including the IMF, to not jeopardise this progress with increased uncertainty," said Greek Finance Minister Euclid Tsakalotos.

Already huge, Greece`s debt is on path to grow to 315 billion euros ($334 billion) or around 180% of output this year, according to the latest EU data.

The issue turns on a key figure: the 3.5% primary balance, or the surplus on the public finances before debt repayments, that Greece is supposed to reach.

The target is very high -- and most countries do not even come close -- but Germany believes it is the only way to solve the Greek issue once and for all and wants Athens to keep the pace for 10 years after the end of the current bailout in 2018.

"Some have argued for three years, some for five and some for 10," Eurogroup head Jeroen Dijsselbloem told reporters after the talks.

The IMF, however, says that option is unrealistic -- an economy with an already unsustainable debt burden cannot be expected to tighten the screws further.

A senior IMF official who attended the talks, said they are far from agreement with the parties.

The official repeatedly stressed that a 1.5% primary surplus is attainable and the preferred option. The fund is willing to go along with the higher target for a limited number years but only if there are tax and pension reforms sufficient to offset the fiscal hit.

The country already has done a "tremendous amount of adjustment, but it is increasingly in a way that is not sustainable," the official said, adding that this has been a pattern in the past where Athens implemented tough reforms but could not sustain them.

The fund cannot base its assessment "on measure that will not stick." If Greece and the Eurogroup want to use the higher surplus target, "we need to see those reforms," the official told reporters in a conference call.

But the official bristled at the fact the fund is constantly blamed for pushing austerity measures for Greece, when it fact it is the Eurogroup that is demanding the harder-to-reach target.

"We are time and again being blamed for pushing austerity in Greece. We are not."