Emirates does a world's first, rolls out VR seats; now, check out seats, plane even before boarding jet

Customers can virtually enter the plane and scrutinize the interiors, said the report, adding "since the new feature offers 3D-360 degree views of the cabins, the passenger will have a clearer idea if the selected seat is a good fit for their needs." 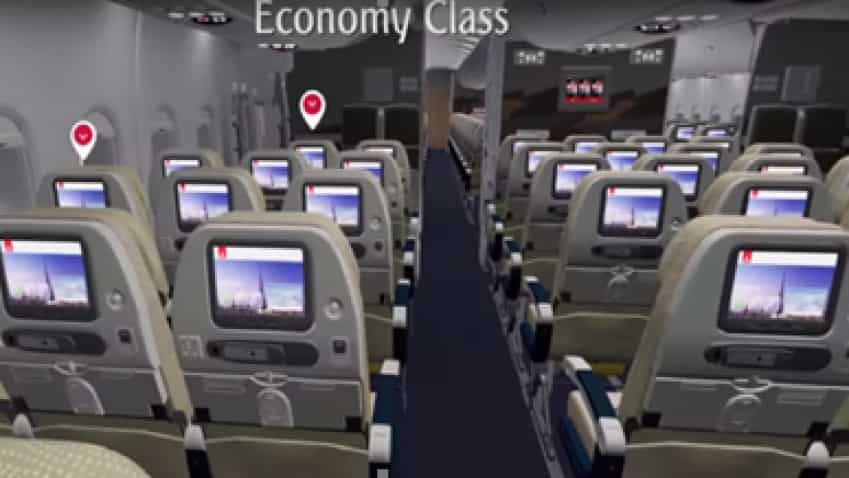 Global airlines are introducing ultra-modern facilities based on cutting edge technology to provide their passengers a superior experience of flying. They also, thereby, acquire an edge over their rivals - competition in airlines is one of the fiercest in the corporate world. In one such move, Emirates has become the first airline to launch virtual reality (VR) seats, and thereby, providing the flyers advantage of visiting the airline’s website on their desktop or mobile phone and visualize the interior of the Emirates A380 and the Emirates Boeing 777.

Becoming the first airline to use VR technology, Emirates is thus facilitating its flyers to check-in online and choose seats prior to departure. This would not only take away the hassle of standing in long queues at the airports, but also help ensure that one gets the aisle, window or whatever seat one prefers, according to a Gulf News report.

According to the report, Emirates has just introduced three-dimensional (3D) seat models on its portal, allowing passengers to check out in advance the plane they have booked, before even boarding the aircraft.

Customers can virtually enter the plane and scrutinize the interiors, said the report, adding "since the new feature offers 3D-360 degree views of the cabins, the passenger will have a clearer idea if the selected seat is a good fit for their needs."

Passengers will reportedly be able to navigate through the economy, business and first class sections besides checking out the facilities on Emirates’ iconic double-decker aircraft, such as the onboard lounge and shower spa.

You can now explore our aircraft interiors in 3D. We’re the first airline to introduce VR technology to our app and website so that you can look around our seats and cabin before you fly. https://t.co/3QlY71lCpQ pic.twitter.com/zI2LMdzDy6

Emirates reportedly said it is the first airline to introduce 3D seat models on its digital platform, adding that users can opt to explore the different parts of the plane and choose their seats completely hands-free by using any VR headset.

“As we continually invest to provide our customers with an unmatched travel experience onboard and on the ground, we also work very hard to give our customers a world-class digital experience,” Alex Knigge, Emirates’ senior vice president, corporate communications, marketing and brand (digital) to Gulf News.

“We are pleased to be the world’s first airline to introduce this cutting-edge web VR technology, which offers our customers an immersive opportunity to learn more about the Emirates experience before they step on board,” he added.

Notably, customers accessing emirates.com via their mobile devices or the Emirates app for iOS and Android will also be able to explore their seats before checking in online with the 3D seat map. The tool will reportedly allow would-be customers to book their preferred seats from within the 3D environment.