Britain's Brexit laws: What's changed and what happens next?

The European Union (Withdrawal) Bill is being finalised in parliament after more than 250 hours of debate. It repeals the 1972 laws which made Britain a member of the European Community and provides the basis for existing EU law to be transferred into British law. 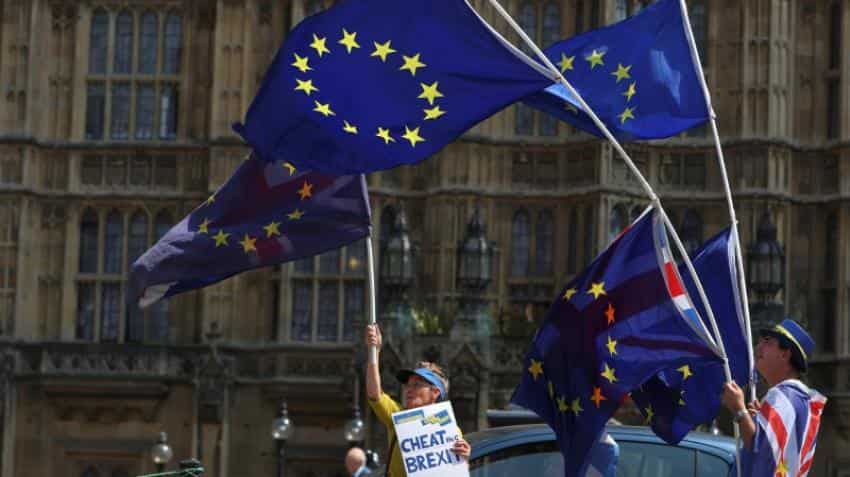 The Commons is now debating whether to accept any of the 15 changes made by the Lords against the government`s wishes. The debate began on Tuesday, and will resume at around 1200 GMT Wednesday. Image source: Reuters
Written By: Reuters
RELATED NEWS

Parliament is finalising laws that will formally end Britain`s membership of the European Union, a process which has forced the government to make some important concessions that will change the dynamic of Brexit negotiations. Below is a summary of what has happened so far and what it means for Brexit.

The European Union (Withdrawal) Bill is being finalised in parliament after more than 250 hours of debate. It repeals the 1972 laws which made Britain a member of the European Community and provides the basis for existing EU law to be transferred into British law.

Having been debated by both the lower house of parliament, the Commons, and the unelected upper house, the Lords, the bill is in its final stages.

The Commons is now debating whether to accept any of the 15 changes made by the Lords against the government`s wishes. The debate began on Tuesday, and will resume at around 1200 GMT Wednesday.

Prime Minister Theresa May was forced into promising a major concession to pro-EU lawmakers on Tuesday which could give parliament a greater say over the exit deal Britain negotiates with the European Union.

May had to do this because she does not have a clear parliamentary majority and faced defeat. Her party is split between Brexiteers who want a clean break from the EU and a pro-European faction who want to retain close ties.

So far, the government has rejected all the other changes proposed by the Lords, including an attempt to remove the fixed Brexit date of March 29, 2019, from the bill.

WHAT WAS THE CONCESSION?

The government has always promised to give lawmakers a vote on the final exit deal it negotiates with the EU. Ministers originally wanted to make this a vote to either accept the deal or to leave without a deal.

To avoid a rebellion, May proposed a plan whereby, if parliament rejected its deal, ministers would have 28 days to come up with a plan of action and present it to lawmakers.

This was not enough to convince the rebels. Ministers then agreed to discuss ways to add additional checks and balances to the process. The government said it would discuss a three-part alternative proposal put forward by one of the rebel lawmakers.

WHAT IS UNDER DISCUSSION?

The government has agreed to consider ways to implement the first two parts of pro-European lawmaker Dominic Grieve`s plan.

The first part of Grieve`s plan means that if parliament votes against the government`s deal, ministers have 21 days to come back with a plan of action, which must then be approved by a vote in parliament within seven days.

Compared to the government`s proposal, this is a shorter time to respond, and gives parliament a vote to approve the response.

The second part of Grieve`s plan specifies that if the government has not reached a deal with the EU by November 30, ministers must submit a plan of action to parliament. This plan of action must then be approved by parliament in a vote.

This adds an extra backstop in case the government`s stalled negotiations with the EU are delayed. The government is aiming to have a deal agreed in October.

A third part of Grieve`s amendment, which the government has not agreed to discuss and is likely to resist, would hand control of the Brexit negotiations to parliament if an exit deal has not been agreed by Feb. 15 next year.
WHAT DOES THAT MEAN?

The final compromise has yet to be agreed and will be discussed in private over the coming days.

However, whatever form it takes it will give parliament a greater say over the final deal in the event that the government either fails to reach an exit deal, or proposes an exit agreement which parliament does not accept.

This is significant because a majority in parliament wishes to see a softer Brexit deal that would retain closer customs ties with the EU after Britain leaves.

If Brexit is softened in this way, an influential group of eurosceptics in May`s party could challenge her leadership. Such an outcome, though far from certain, would cast the Brexit process into disarray.
WHAT HAPPENS NEXT?

Talks with rebels will take place over coming days to negotiate a new form of words defining what say parliament will have over the process and will reveal how much ground May has given to the pro-Europeans.
Watch this Zee Business video

This new form of words will then be presented to the Lords on June 18. Both houses must then agree the final wording before it becomes law. A final end-date for the process has not been fixed, but is likely to come within weeks rather than months.