Having shipped 9.2 million smartphones in the third quarter of 2017, the company now shares the top spot with South Korean giant Samsung, with a market share of 23.5 per cent, according to the International Data Corporation`s (IDC) latest Quarterly Mobile Phone Tracker, Q3 2017. 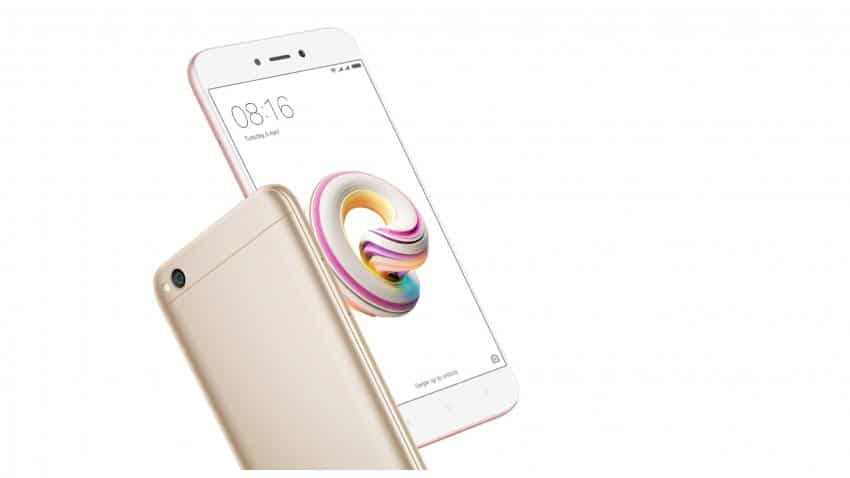 Redmi 5A has the price tag and specifications of an entry-level Android smartphone. Image source: Official website
RELATED NEWS

Get this Xiaomi smartphone at a discount

Redmi 5A price in India and more; 10 points that make this Xiaomi smartphone an eye-ball grabber

Chinese handset maker Xiaomi has flooded the Indian smartphone market with devices at overlapping prices but compelling features. Its latest offering, the Redmi 5A, has the price tag and specifications of an entry-level Android smartphone.

Having shipped 9.2 million smartphones in the third quarter of 2017, the company now shares the top spot with South Korean giant Samsung, with a market share of 23.5 per cent, according to the International Data Corporation`s (IDC) latest Quarterly Mobile Phone Tracker, Q3 2017.

Marketed as "Desh ka smartphone", Redmi 5A is essentially a successor to the Rs 5,999 Redmi 4A which was launched in April this year.

According to the company, the big highlight of the device is an "eight-day battery life" (stand-by time).

The company, however, has announced a discount of Rs 1,000 on the first five million units of the 2GB RAM variant, effectively bringing down the price to Rs 4,999. This also makes it the cheapest offering from the Chinese handset maker in the country.

Let`s find out how the phone fares in everyday use.

Redmi 5A looks like an average entry-level phone with a plastic body but the rear has a glossy, metallic finish.

The device is impressively lightweight and offers an ergonomic grip. At 8.35-mm thickness this one is not the slimmest one out there, but it fits perfectly in the palm.

The power and volume buttons are housed on the right while the left side has two trays -- one for a single nano SIM card and another for a secondary SIM card and a dedicated MicroSD card to expand storage up to 128GB.

The 13MP rear camera with f/2.2 aperture and single LED flash took average photographs under well-lit conditions. The autofocus of the primary camera was quite snappy.

In our opinion, the macro-shots fared better than those clicked from a distance.

The five-inch display has vibrant colours despite being a strictly budget phone.

Its competitor Micromax "Bharat 5" comes with a slightly bigger 5.2-inch display but a lower-resolution 5MP primary shooter for Rs 5,555.

The 5MP selfie camera of Redmi 5A is capable of taking average photos. It comes equipped with several built-in filters that should make the selfie-focussed generation happy.

An interesting and useful addition to the phone is an Infrared (IR) emitter on the top that comes handy while controlling household appliances.

A quad-core Qualcomm Snapdragon 425 chipset fuels the device which gets the job done with ease without compromising on performance. We did not notice any significant lag in the device`s performance or heating issues while running several apps and browsing videos on the Internet.

The front shooter comes equipped with beautification by default that makes faces look very artificial. The "Pro mode" and "Smart mode", when turned off, reveal the weakness of the snapper.

We also think the camera app interface could have been better.

The capacitive navigation buttons below the screen are not backlit.

Conclusion: The budget device has a few misses when it comes to camera performance but we should not forget that it is an entry-level phone that tries to balance out the features with the low price point. We would recommend the Redmi 5A to those looking to upgrade from a feature phone to an Android smartphone on a tight budget.

Get this Xiaomi smartphone at a discount

Redmi 5A price in India and more; 10 points that make this Xiaomi smartphone an eye-ball grabber