"Our startups are changing the rules of the game. I believe that startups are going to be the backbone of New India," he said interacting with youngsters from the world of startups through video conference. "Let us innovate for India, innovate from India," Prime Minister Narendra Modi said 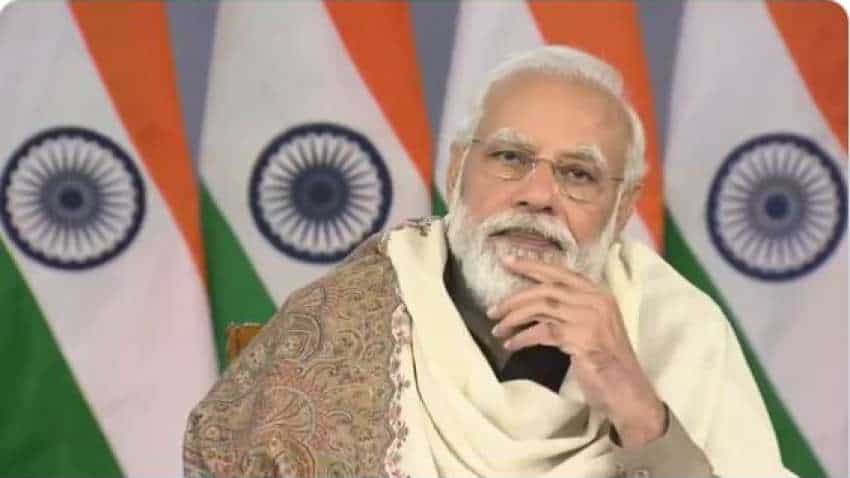 India, he said, has over 60,000 startups with 42 unicorns. Source: Narendra Modi/Twitter

Prime Minister Narendra Modi on Saturday called for innovating for India and from India to tackle challenges facing the country as he counted steps taken by the government in freeing entrepreneurs and innovation from bureaucratic silos.

"Our startups are changing the rules of the game. I believe that startups are going to be the backbone of New India," he said interacting with youngsters from the world of startups through video conference. "Let us innovate for India, innovate from India."

The government is focusing on three aspects -- first, to liberate entrepreneurship and innovation from the web of government processes, bureaucratic silos; second, creating an institutional mechanism to promote innovation; and third, handholding of young innovators and young enterprises, he said.

"India's ranking on the Global Innovation Index is improving because of the programme on innovation started in the country. India was ranked 81 in 2015 and now it is at No. 46," he said.

Startups are not just bringing innovations but are also evolving as major job creators.

The year 2022 has brought new opportunities and avenues for startups, he said adding January 16 will be celebrated as National Startup Day to help percolate startup culture to the grassroot level.

Innovation and technology-based solutions are being encouraged for finding solutions to challenges facing the country, he said.

The startups gave presentations on six themes -- Growing from Roots; Nudging the DNA; From Local to Global; Technology of Future; Building Champions in Manufacturing; and Sustainable Development.

More than 150 startups were divided into six working groups for the purpose of these presentations.

They shared ideas and inputs on a variety of sectors and areas including robust data collection mechanism in agriculture; making India preferred agri business hub; boosting healthcare through use of technology; tackling issue of mental health; promoting travel and tourism through innovations like virtual tours; ed-tech and job identification; connecting offline retail market with digital commerce.

Speaking after the presentations, the Prime Minister said that organisation of this Start Up India Innovation week is all the more important in this year of Azadi Ka Amrit Mahotsav as "the role of the startups will be critical when Indian freedom reaches its centenary year".

"I congratulate all the startups of the country, all the innovative youth, who are raising the flag of India in the world of startups. For this culture of startups to reach the far-flung parts of the country, it has been decided to celebrate January 16 as National Start-up Day,", Modi said.

Recalling the concept of the current decade as the 'techade' of India, he listed three important aspects of the massive changes that the government is making in this decade to strengthen the innovation, entrepreneurship and startup ecosystem.

Measures like removing problems of 'angel tax', simplification of tax procedure, arranging for government funding, allowing self certification of certain labour and environment laws and removal of more than 25,000 compliances have taken the process further, the Prime Minister noted.

He said the government's effort is to institutionalise innovation in the country by creating attraction for innovation among students since childhood.

Modi said, "Our startups are changing the rules of the game. That's why I believe startups are going to be the backbone of new India...Today India is rapidly moving towards hitting the century of the unicorns. I believe the golden era of India's startups is starting now."

He also underlined the role of empowerment by entrepreneurship in addressing the problems of development and regional-gender disparities.

"Do not just keep your dreams local, make them global. Remember this mantra- let's Innovate for India, innovate from India," he exhorted the innovators.

Further, the Prime Minister suggested several areas where the startup ecosystem can play a major role.

He said that extra space on the PM GatiShakti National Master Plan can be used for EV charging infrastructure and areas like defence and chip manufacturing offer many possibilities.

"Many investors have been investing in drone startups after the new drone policy. Army, Navy and Air Force have given Rs 500 crore worth of orders to drone startups," he said, adding investment on research and development related to future technology is the priority of the government today.

Referring to the future prospects, the Prime Minister said that as of now only half of India's population is online, therefore future possibilities are immense.

He appealed to the startups to move towards villages also.

"Whether it is mobile internet, broadband connectivity or physical connectivity, aspirations of villages are rising and rural and semi-urban areas are waiting for a new wave of expansion," he said.