Zee Business' News Anchor Swati Raina spoke to Ankit Gulgulia, CEO & Founder of Gravita Consulting, in the episode of Money Guru, clearing all the queries regarding the new advance GST ruling for the employees. 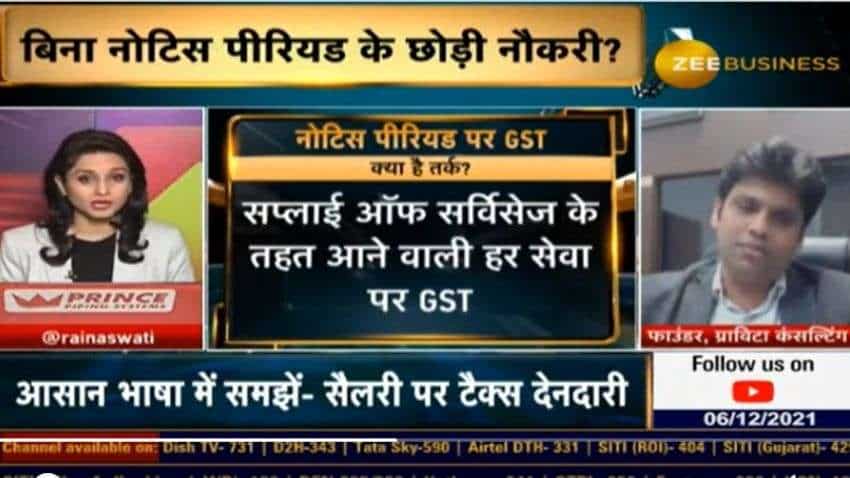 According to Ankit, most of the companies normally have a notice period of 1 month, but it varies depending on the contract made by the company during the joining of the employee.

What will be the effect on the pockets of the employees due to GST on notice period salary recovery? Which part of the salary of the employee will be taxed? What will make you liable to pay GST on notice period salary recovery? How to avoid getting notice from Income Tax department? What kind of high transactions are taxable? Ankit Gulgulia, CEO & Founder of Gravita Consulting, answers all your queries.

Zee Business' News Anchor Swati Raina spoke to Ankit Gulgulia, CEO & Founder of Gravita Consulting, in the episode of Money Guru, clearing all the queries regarding the new advance GST ruling for the employees.

Swati Raina said, "You may regret not serving notice period or leaving your job. However, according to the Authority of Advance Ruling (AAR), you may have to pay GST on the salary that you did not serve in your notice period. Ankit Gulgulia will answer all your queries."

Responding to the question asked by Swati about an explanation on the new ruling, Ankit Gulgulia said, "Any employee leaving without serving notice periods will have to pay a recovery amount to the company on the differential period. And upon that recovery amount, the employee will be charged 18 per cent GST by the company. Which is a standard charge for GST applicable on services."

According to Ankit, most of the companies normally have a notice period of 1 month, but it varies depending on the contract made by the company during the joining of the employee. The taxation on the recovery amount will be proportionate to the employee's CTC. This may include an employee's basic salary. LTA (Leave Travel Allowance), HRA (House Rent Allowance).

Upon asking about the reason for this new ruling by Swati, Ankit answered, "This is not a change in the law. This is a view from the GST ruling. The argument behind this new ruling is that in GST, even not serving a task is also considered to be a service or stopping someone from not attending anything can be considered as a service in GST terms. Not only this, if a company is letting go of its employee without serving their notice period, it will also be considered as a service. Hence, taxable at 18 per cent. This Ruling will eventually be followed Pan-India unless challenged."

Which 'recovery' of the employee will be taxed?

According to Ankit, "If in case the employee availed the premium term medical insurance offered by the company while working in the company, they will have to pay the GST tax for it. Additionally, if the employer gifted you a laptop worth Rs 40,000 and made you pay one-fourth of the cost. You will have to pay for the total value of the gift. On the other hand, you will not be liable to pay GST on other allowances offered by the company like dearness allowance, children's education, telephone bill, group insurance, etc."

What will be the effect on the pockets of the employees?

Explaining its impact on employees' pockets, Ankit said, "In longer terms if government intents to exempt it, the government might introduce a circular because of dichotomic nature of the ruling. Whenever such transactions happen, the employer would not want to pay any unprecedented tax on anything. Hence, they will ensure employee pays tax on everything."

Adding to his point, Ankit said, "To lessen the brunt on the employee, they can decide and divide on the share of GST to be charged. Employers along with employee can decide the share of the GST amount together."

Is the new ruling applicable pan-India?

Clarifying about the implementation part, Ankit shared, "This ruling has come in states like Gujarat and MP. But on the larger perspective, the officer of any department officer will refer to this document for any initiations of action."

Explaining what is Specified Financial Transaction (SFT) which is to be taxed, Ankit said, “Whenever you exceed the limit of SFT, the onus falls upon the bank, which serves as the medium for your transaction to inform the Income-tax department.”

RBI repo rates: What is the impact of low interest rates? Know better return options from bank FD and more

Money Guru: Know 5 Ratios while selecting a Mutual Fund; How much is the historic performance important?

Shares to buy! TOP 5 MONEY MAKING TIPS - DECODED! What to look for in a stock while making investments