Budget 2019 expectations: 3 big income tax changes that can be announced by Nirmala Sitharaman

Budget 2019 expectations: The upcoming budget, which is to be presented by Finance Minister Nirmala Sitharaman, offers yet another opportunity for the government to meet popular demands. 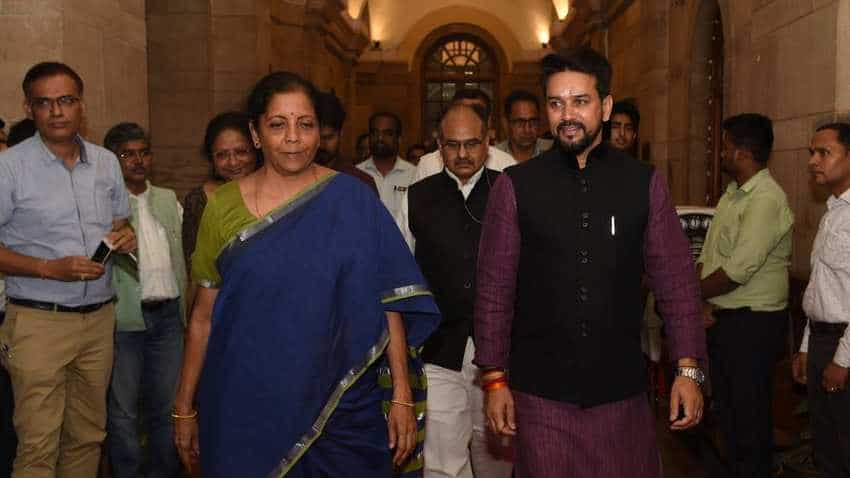 The Union Budget 2019 will be presented by Finance Minister Nirmala Sitharaman on July 5. Source - PTI.

Budget 2019 expectations: When the then acting Finance Minister Piyush Goyal presented the interim budget earlier this year, expectations were high on personal taxation front, with several voices demanding a change in tax slabs. Even though that did not happen, the government made some major announcements including the extension of tax rebate for people with income up to Rs 5 lakh. The Modi government also raised the standard tax deduction for salaried persons from Rs 40,000 to Rs 50,000 while the Tax Deducted at Source (TDS) threshold on interest earned from Bank/Post Office deposits was raised from Rs 10,000 to Rs 40,000.

Now, the upcoming budget, which is to be presented by Finance Minister Nirmala Sitharaman, offers yet another opportunity for the government to meet popular demands. The Budget 2019 expectations once again include change in income tax slabs. But, that is unlikely to happen with government already giving rebate. However, here are three big changes that you could expect from the coming budget -

1. National Pension Scheme: Divya Baweja, Partner, Deloitte India explained that withdrawals under the NPS attract partial taxes at the time of withdrawal. She said that this means while contributions and accretions to the NPS are exempt up to a limit, withdrawals would be taxed as normal income.

"Subscribers to NPS, upon attaining the age of 60 years, are allowed to withdraw 60% of the corpus out of which 40% is tax exempt and balance is 20% is taxable and remaining 40% is compulsorily required to be invested in monthly pension annuity plan, Baweja said, while adding, "There is a proposal in pipeline for exempting entire 60% of the corpus withdrawn as tax exempt which is yet to be announced by the Government."

2. Increase in 80C limit: The overall limit under Section 80C remains to be Rs 1.5 lakh which the government is expected to increase to Rs 2 lakh. Earlier, ZeeBiz.com had reported that an announcement in this regard can be made in the budget. Baweja said that while the deduction under Section 80C provides for various types of payments by the taxpayer covering expenses (e.g. children tuition), investment and housing (e.g. housing loan repayment) and retirement fund contributions (e.g. PPF), the overall limit of INR 1.5 lakh (excluding NPS contribution) is very low.

"The government may consider increasing the 80C limit from INR 1.5 Lakh at least to INR 2 Lakh specifically for specified investments in identified avenues of importance such as Schemese promoting Savings/Investments, etc. This shall help the individual to additionally save tax of INR 2,500 to INR 15,000, depending upon the applicable tax slabs," she said.

3. Increase in 80D limit: Often very less talked about Section 80D of the income tax allows taxpayers to save above the Section 80C limit. However, you can only claim Rs 25,000 under this section. "The Government may increase the current limit of deduction for health insurance premium from INR 25,000 to 35,000," Baweja added.

The Union Budget 2019 will be presented by Finance Minister Nirmala Sitharaman on July 5.