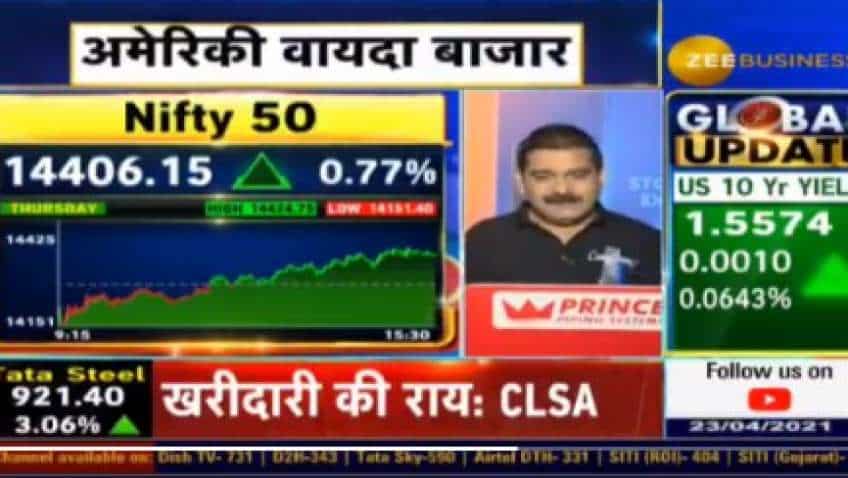 Citing crucial market levels on the last of the week today, Zee Business Managing Editor and Market Guru Anil Singhvi said that a closing below 14300 should be considered as weak and a closing under 14200 would be bad. The Market Guru said this while reviewing the last few days performance of the market which is in the doldrums due to covid situation in the country.

Singhvi said, “If the market falls below 14300 today at closing then investors need to be a little cautious and should review their portfolio. And, if it closes below 14200 then, the uncertainty within the market would grow."

He mentioned that if an investor's view is negative and the market continuously hits its support level then it definitely will fall below a current support level and trade around 14000-13800 level.

Quoting glass half full and glass half empty concept, Singhvi pointed out that the market has been giving hope every time it enters the level of 14150-14200 level, as even during Thursday’s trading recovered from the day’s low to end positive with around one per cent gain in the second half.

The market has been getting the support of 14300 levels that has been tested multiple times in the last one week, Singhvi added. He further said, this could be an opportunity for some traders to buy if it falls below the support mark.

Market strolling around 14300 levels is a positive side for some as well as it’s negative for others at creates room for the opportunities., Singhvi mentioned. He added, 14300 levels could be term as a decisive break as so far the market has been seeing lows of 14250, 14151 during intraday.

However, if it closes at the support level, which means there’s something that doesn’t want the market to break beyond a level, Singhvi said. If there’s some support for the market at closing then there are others making the market decline during intraday, he explained.