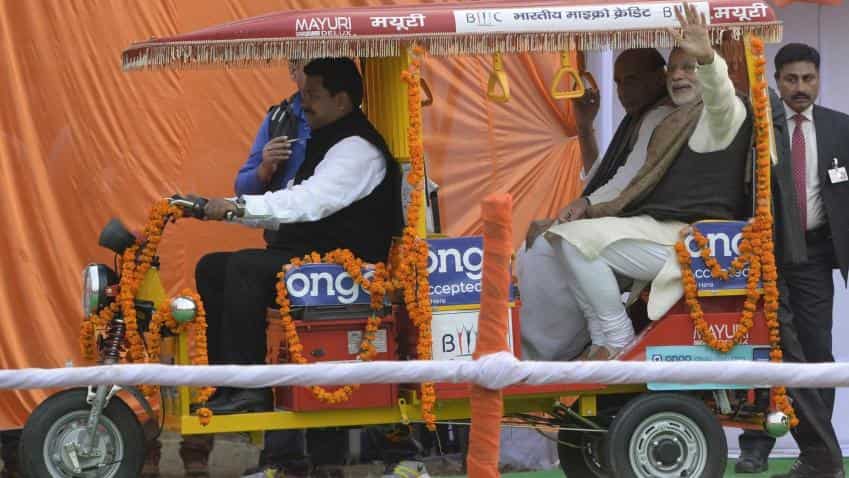 Along with lowering the entry barriers to the cab hailing industry and as an alternative to car ownership the committee has proposed a few other unconventional alternatives to public transport. Photo of PM Modi. Image Source: IANS

The committee set up by Ministry of Road Transport and Highways (MORTH) on Thursday issued a draft policy on ‘Taxi policy guidelines to promote urban mobility.’

Bringing city taxis on app-based cab rides like Ola and Uber, the committee said, “There is a need to create a suitable regulatory framework to promote shared mobility, liberalise the existing taxi permit systems and encourage new forms of urban mobility to create reliable alternatives to car ownership.”

Along with lowering the entry barriers to the cab hailing industry and as an alternative to car ownership the committee has proposed other unconventional alternatives that would modify the public transport industry completely.

“The State Government should take appropriate measures to promote skilling programs and facilitate removal of entry costs so as to encourage more women to join the mobility industry as commercial drivers,” the committee said.

The report further added, “It is highly recommended that State Governments should have focused driver skilling programs for women and waives all regulatory requirements to ensure entry of more women in the transport sector.”

Motor bike taxis that have been propagated by companies like Uber and Grab in Asia, particularly Bangkok, Thailand and now in Bangalore, Hyderabad and Delhi could even have State run ‘bike taxis.’

“The State Transport Department may allow two-wheeler taxi permit on the lines similar to those for city taxi. This will offer an economical and convenient last mile connectivity solution to the citizens. It is highly recommended that existing private bikes may be allowed for such transportation in order to facilitate utilisation of idle assets and State Governments may also consider online option to allow private bikes to convert to taxis,” the report said.

Under the pretext of lowering pollution the committee said, “The States also should allow e-Rickshaws to ply on the city roads for last mile connectivity as they offer zero-pollution and low cost transport solutions.”

The report also added, “They are safe for women and children in view of open structure of the vehicles. The States may place appropriate restrictions with regard to movement of eRickshaws in view of the differential speed of traffic on specified stretches of roads.”

The committee said, “The three-wheeler auto-rickshaws can also be brought under aggregation which would offer convenience to the commuters. It is recommended that a suitable service charge may be allowed by transport department to be charged by the aggregators for such service.”

Addressing the woes that most city dwellers face the committee also pencilled in that no cabbie or rickshaw functioning under these new guidelines would be able to refuse a rider.

“Radio Taxi Operators, Agents or Aggregator Platforms must establish a policy of zero tolerance for discrimination or discriminatory conduct while a driver is working on such platforms. Discriminatory conduct may include: refusal of service; b) using derogatory or harassing language directed at passenger; c) rating a passenger on the basis of sex, race, caste, creed, religion, or nationality,” the report said.

Private car owners who would be willing to convert their cars into taxis may be permitted to apply for such permits online and may be allowed such conversion on payment of requisite fee and compliance of stipulations for tax permit, the report said.

“This will help in utilization of existing idle assets. Any such conversion should be permitted only if the vehicle complies to latest emission norms,” the report said.

When speaking of liberalising ‘the existing taxi permits,’ which among others mandates cab drivers to wear a metal badge that symbolises the cab driver has had a No Objection Certificate (NOC) from the police, a domicile certificate – to prove the cabbie has been a resident  and a transport license which is again different from an ordinary license.

The report added, “This was also accentuated by the need to bring aggregators, radio taxi operators and traditional city taxis under a uniform, fair and transparent regulatory framework.”

The metal badge system which is not presently diligently followed could possibly also be eliminated; however the report said, “The Driver’s identification along with the photo and registration number of the vehicle should also be prominently displayed in the taxi.”

The transport ministry had set up this committee in May this year as the government decided to legalize ride-hailing services in the country.