Budget 2019: A look at Manmohan Singh's interim budget 2014 and what to expect from PM Modi

Budget 2019: Coming just before General elections this year, some suggest, nothing much should be expected from Prime Minister Narendra Modi and Finance Minister Arun Jaitley's last budget of the current term. 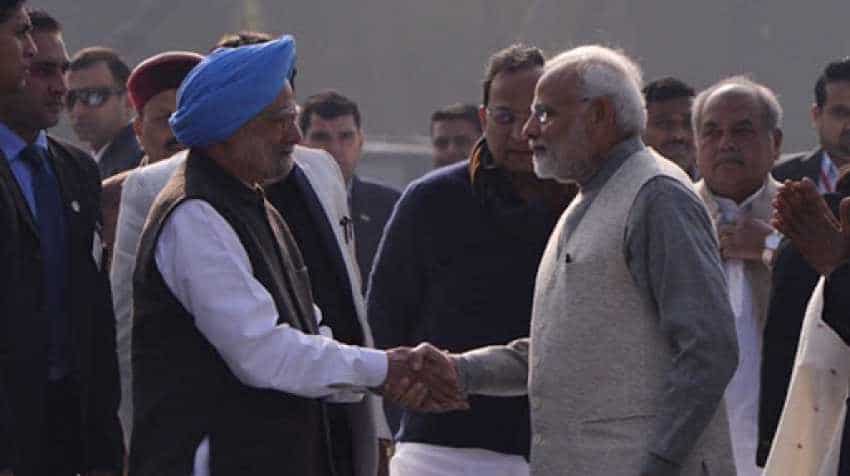 Budget 2019 to be presented on February 1. Images source: IANS

Budget 2019: Coming just before General elections this year, some suggest, nothing much should be expected from Prime Minister Narendra Modi and Finance Minister Arun Jaitley's last budget of the current term. The suggestion is apt as big promises cannot be fulfilled when the model code of conduct for elections get into force - hopefully just a few weeks after the Budget presentation on February 1. But, what about some big promises? At least, there is an immediate precedent dating back to the Manmohan Singh-led UPA-II government, which didn't shy away from making some big announcements concerning the citizens. Consider some of these announcements Singh government's interim budget of 2014-15:

- The interim budget reduced factory gate tax to 10 per cent from 12 per cent on some capital goods, consumer durables

- Excise duty on small cars, motorcycles and commercial vehicles were cut from 12 to 8%

- Moratorium on interest on student loans taken before March 31, 2009; The decision was then expected to benefit 9 lakh borrowers.

- Finance Minister P Chidambaram had then announced that armed forces' long-pending demand for one rank, one pension (OROP) was accepted. He hiked the defence spend for 2014-15 to Rs 2,24,000 crore (Rs 2.2 trillion/($36 billion). Out of this, Rs 89,588 crore was set aside for acquisitions by the armed forces, Rs 1,34,410 crore for payment of salaries and other expenses. The interim budget also included Rs 500 crore for implementing the OROP norm from the fiscal beginning April 1.

As you see, some big announcement, like OROP, that may have swayed voters in the favour of the then government was announced in the Interim Budget 2014. While nothing can be expected on tax front because of GST front, some other announcement can be certainly hoped - either in the budget or in the run-up to the budget this year.

What to expect from Modi government

Budget 2019 is important because this is the 5th and last Budget of the current NDA government led by PM Narendra Modi. It is one last chance for the government to win the confidence of farmers and other voters in the country. The announcements may set the tone for the elections, affect the agenda of the government that may come to power after the polls.

One can expect some populist announcements. The government would likely take advantage of the budget event to highlight its achievements and provide a vision for the future. The budget may be able to give direction to progress in the lives of people in all segments of society - from farmers to the common man. At the core of the effort may be a direction on income tax, banks, disinvestment, fiscal deficit target, inflation, ease of doing business, start-ups.

Right now, the top issue on Modi govt's agenda is job creation and farmers' welfare. We can expect some big announcements on these two fronts.

Langya virus China: What this virus is, symptons and treatment - all you need to know