The government Wednesday lowered the country's economic growth rate during the previous Congress-led UPA regime, shaving off over 1 percentage point from the only year when India posted double-digit GDP growth post liberalisation and from each of the three years with 9-plus per cent expansion. 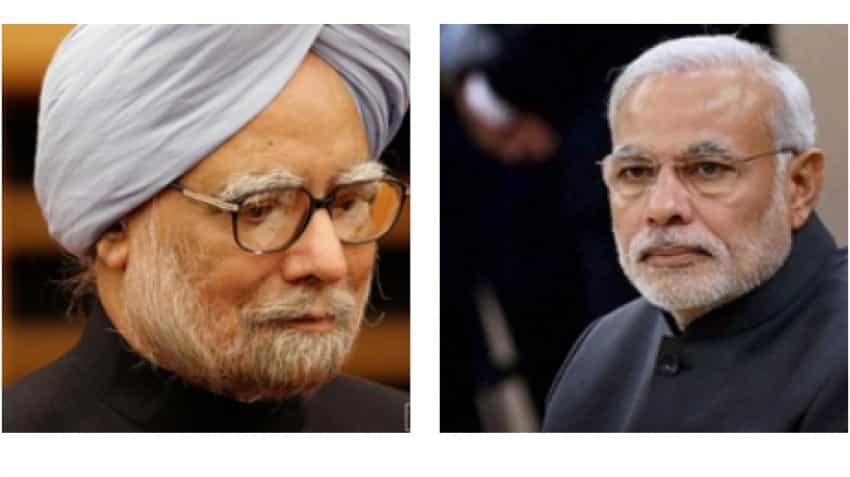 The government Wednesday lowered the country's economic growth rate during the previous Congress-led UPA regime, shaving off over 1 percentage point from the only year when India posted double-digit GDP growth post liberalisation and from each of the three years with 9-plus per cent expansion.

The revised growth numbers have been released ahead of the 2019 general elections. At a joint press conference along with Chief Statistician Pravin Srivastava, Niti Aayog Vice-Chairman Rajiv Kumar said variation in two sets of numbers was due to the recalibration of data in certain sectors of the economy, including mining, quarrying and telecom.

"A complex exercise has been carried out by the Ministry of Statistics and Programme Implementation to update the National Accounts Series. The new series has made significant methodological improvements," Kumar said. He added that the New Series, with its supporting back series, is "internationally comparable and is in sync with UN Standard National Account."

When asked if it is a coincidence that GDP numbers have been revised downwards only for the UPA period, Kumar replied in the negative. "No it was not a coincidence. It was a matter of hard work done by the CSO officials who had taken the pain to do all the recalibration of economy that they have done," he said, adding, the methodology adopted has been vetted by leading statisticians.

In January 2015, the government moved to a new base year of 2011-12 from the earlier 2004-05 for national accounts. The base year of national accounts had been revised earlier in January 2010. The so-called back-series data released Wednesday is in contrast to an August 2018 report by the Committee on Real Sector Statistics appointed by the National Statistical Commission (NSC), the autonomous body that helps in collection of data by India's statistical agencies.

In the report, which the government had subsequently stated was a draft seeking comments from stakeholders, the economy grew at a faster pace under the UPA government from 2004-05 to 2013-14, compared with the average growth during the first four years of the current government.

It had put the GDP growth at 10.08 per cent in 2006-07 under the then Prime Minister Manmohan Singh, the highest since the liberalisation of the economy in 1991. The highest ever growth rate since Independence was stated to be at 10.2 per cent in 1988-89 when Rajiv Gandhi was the Prime Minister.

The committee's report has not been accepted and Kumar said the methodology adopted by them was flawed. Giving reasons for divergence in the data sets, Srivastava said in the new series the share of primary sector in total Gross Value Added (GVA) is higher than that in the earlier 2004-05 series primarily due to changes in the data sources.

In the mining and quarrying sector, regular annual returns of public sector have been used instead of the Indian Bureau of Mines data in the 2004-05 base.

As per the CSO, the share of secondary sector in total GVA has increased in the back-series compared to the 2004-05 series. The increase is largely due to use of Ministry of Corporate Affairs (MCA) data and public sector data in organised electricity and manufacturing sectors, which was earlier sourced from annual reports of private electricity companies and annual survey of industries, respectively.

The share of the tertiary sector, which mainly includes services, in overall GVA has reduced in the back-series compared to the 2004-05 series. Giving an example, Kumar said in the communication sector, in the old series, benchmark estimates were moved with telecom subscriber growth, where the growth was over 20 per cent.

In the new series, minutes of usage has been adopted, which better reflects the behaviour of this sector, said the Niti Aayog Vice-Chairman. The GDP figures for fiscals 2012-13 onwards on old series are not available for comparison, Kumar said, adding that the methodology used for computing the national accounts is in line with global standards.

Ahead of Budget 2019 presentation, the government says this on joblessness report controversy