Sonam Kapoor and Anand Ahuja were married today in a grand ceremony in Mumbai. 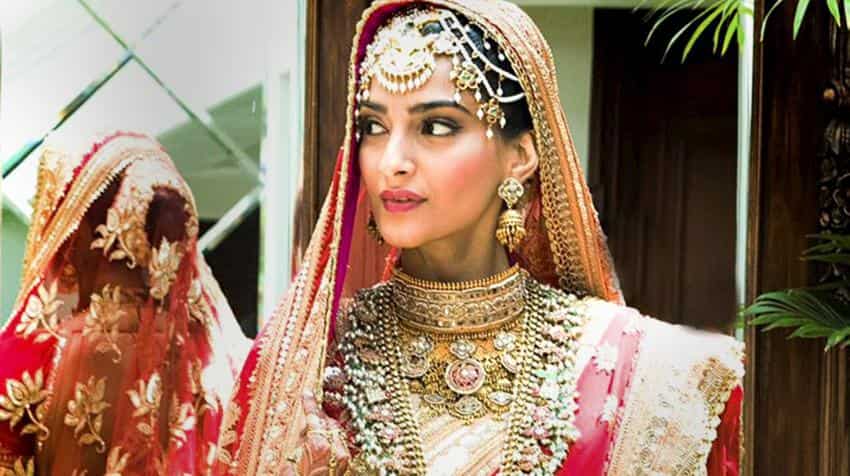 Bollywood actress Sonam Kapoor dressed in a bridal red lehenga poses for a photograph during her wedding in Mumbai on Tuesday. Photo: PTI
Written By: ZeeBiz WebTeam
RELATED NEWS

B-Town weddings are glamorous and glittery, especially divas who never shy away from flaunting their beautiful attire on the big day. Today, Bollywood’s famous people are busy as Anil Kapoor’s daughter Sonam Kapoor has tied the knot with businessman Anand Ahuja. The couple’s marriage took place on Tuesday in the presence of family and friends. Right from director Karan Johar to actors like Amitabh Bachchan, Rani Mukherjee, Saif Ali Khan, Karishma Kapoor and many more are attending the wedding. The ceremony itself took place in Bandra near Bandstand at Kavita Singh’s heritage bungalow who is Sonam’s mother Sunita Kapoor’s sister. The bungalow is right next to Shah Rukh Khan’s mansion, Mannat in Mumbai.

The couple decided to get married after nearly four years of knowing each other. It has been revealed that Anand first met Sonam in July 2014 through a close friend. Anand proposed to Sonam within a month and the actress said yes.

Coming to Sonam, the actress is shining today as the bride in traditional red and gold lehenga by Anuradha Vakil. According to Vogue, Kapoor’s bridal lehenga was accessorised with stunning vintage style jewellery—a choker layered with a guttapusalu necklace and multi-stranded matha patti completed her look.

So, how much would it be worth? Considering that Bollywood actresses try to make some fine points in showing off their wedding dresses, at first look, the dress must have cost a packet! 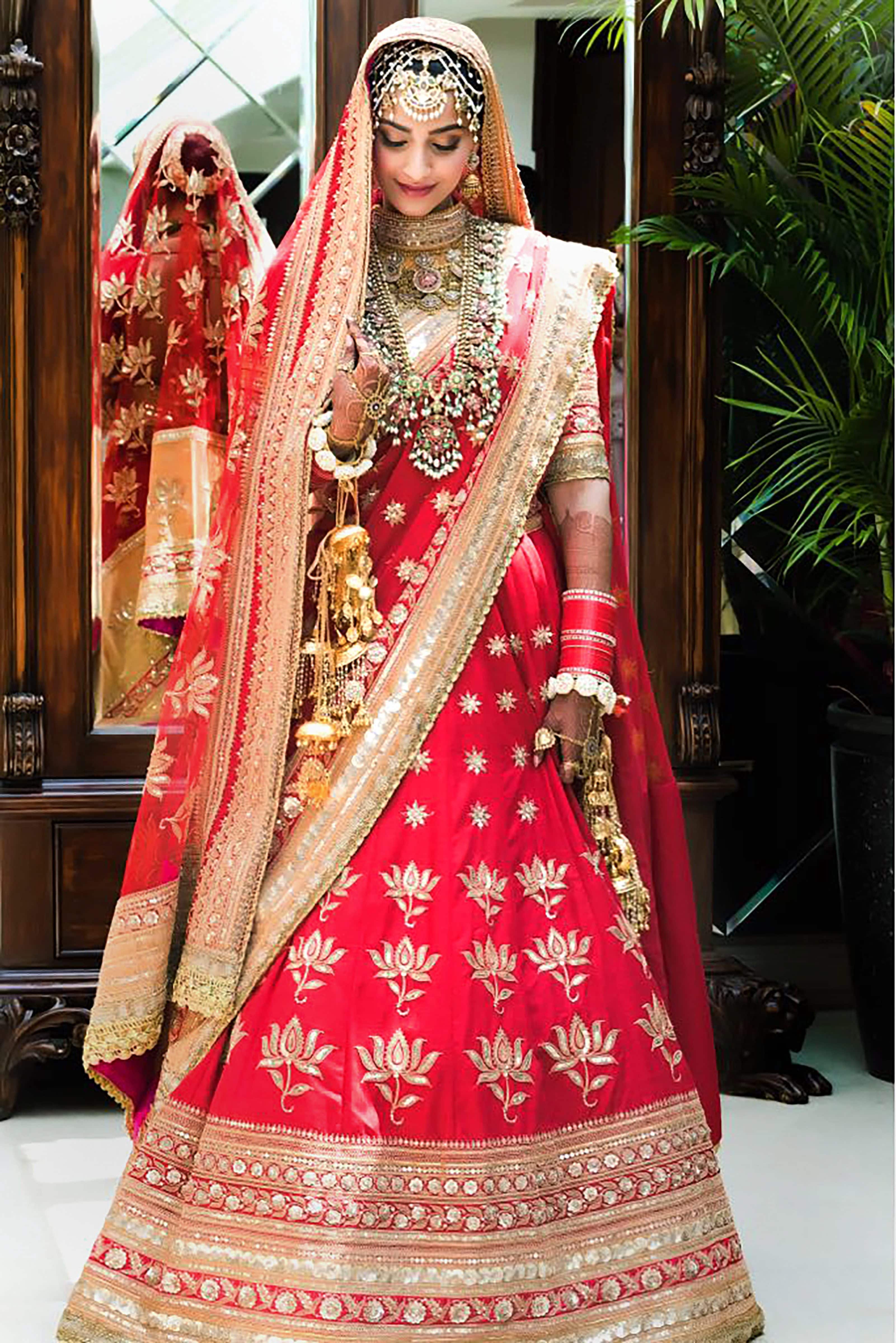 However, there is no putting a specific official number on the price. However, that has not stopped many from putting a price on it and some reports have cited anything between Rs 70 lakh to Rs 90 lakh. Keeping that in mind let's have a look at the most expensive wedding dresses of Bollywood actresses.

If we are talking about most expensive wedding dresses in Bollywood, Aishwarya Rai Bachchan has to be mentioned in the list. After all she married Amitabh Bachchan’s son Abhishek Bachchan. Aishwarya’s dress was designed by Neeta Lulla and its price was quoted at an estimated Rs 75 Lakh. The actress also wore 22 karat gold jewellery which also included emerald and gold armband on her wedding day.

Shilpa married business tycoon Raj Kundra, and her wedding dress was designed by Tarun Tahiliani. She wore a red-coloured saree dotted graciously with about 8000 Swarovski crystals. It is said that the actress paid a whopping price of Rs 50 lakh.

Kareena married actor Saif Ali Khan. She wore  mother-in-law Sharmila Tagore’s wedding lehenga which was designed by Ritu Kumar. In her reception, she wore outfit created by Manish Malhotra, for which she reportedly paid a massive amount of  Rs 50 lakh.

The actress got married to Ritesh Deshmukh. The wedding dress which she wore was designed by Neeta Lulla. The cost was reported at Rs 17 lakh.

According to reports, Urmila wore a red-coloured saree lehenga designed by Manish Malhotra, which cost around Rs 4.50 lakhs. Apart from this, she even wore contrasting green-coloured glass bangles and gold and kundan jewellery.

The actress got married last year to Karan Singh Grover. She looked stunning in a Bengali wedding outfit designed by Sabyasachi Mukherjee paired with Kundan jewelry from Jaipur. The cost was Rs 4 lakh.

The actress' dress was designed by Ritu Kumar which included Kurta, Payjama and farshi in green and golden beige color. Her marriage was done in Hyderabadi style and her dress cost Rs 3 lakh.

Daughter of actors Dharmendra and Hema Malini, wore a wedding dress designed by  Neeta Lulla. She wore a red Kanjeevaram saree paired with gold, emerald and diamond jewellery. On her big day she spent about Rs 3 lakh.

Considering the above data, it seems like Sonam Kapoor has also entered in the list of most expensive Bollywood wedding dresses.

(Above information is taken from Bollywoodshaadis.com.)