Anand Ahuja-Sonam Kapoor tied the knot on Tuesday in the presence of family and friends. 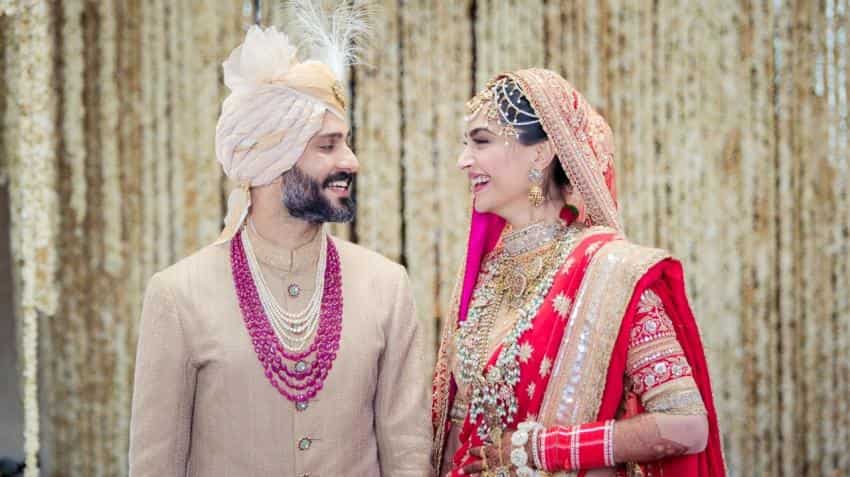 Actress Sonam Kapoor and Anand Ahuja during their wedding ceremony in Mumbai on May 8, 2018. Photo: IANS
Written By: ZeeBiz WebTeam
RELATED NEWS

Anand Ahuja-Sonam Kapoor marriage: The new talk of the town is the marriage of Bollywood actress Sonam Kapoor with businessman Anand Ahuja. The couple tied the knot on Tuesday in the presence of family and friends. The entertainment industry was represented by all the biggies. From director Karan Johar to actors Amitabh Bachchan attended the wedding of actor Anil Kapoor's daughter. The wedding took place in Bandra near Bandstand at Kavita Singh's heritage bungalow who is Sonam's mother Sunita Kapoor’s sister. The bungalow is right next to Shah Rukh Khan's mansion, Mannat in Mumbai.

Now that Sonam has begun a new journey with Anand, let’s know a few facts about the man himself, who usually shuns the limelight, unlike his actress wife. The below mentioned data is taken from International Business Times and India Today.

Anand is 33 and lives with his family in posh Golf Links, New Delhi, one of the most expensive areas in the national capital. According to an India Today report, Anand's grandfather bought a bungalow on Prithviraj Road in 2015. The 3170 square yard plot in central Delhi cost Harish Ahuja a whopping Rs 173 crore. Om Arora, the owner of Variety Book Depot in Connaught Place, sold the bungalow to Ahuja.

In terms of career, Anand is the CEO and Managing Director of his own apparel company named Bhane. This was founded in 2013. Apart from this, he is also the MD of his family-owned company Shahi Exports which he joined in 2011. In addition, he co-founded a multi-brand shoe store called Veg Non-Veg which deals in brand’s like Adidas and Nike, among others.

According to various reports, his family business Shahi Exports is said to be one of the largest export companies in India, with an annual turnover of $450 million. However, Ahuja’s exact net worth is still a mystery.