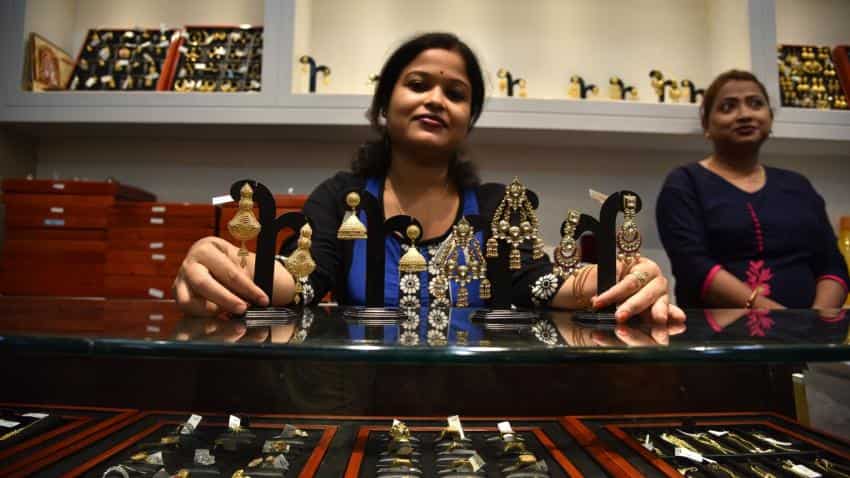 A lady shows jewellery at a store on Dhanteras in Guwahati. Image Source: IANS

Demand for the yellow metal in India fell a whopping 25% y-o-y in the second quarter of this financial year (Q2 FY18) after the rollout of the Goods and Services Tax (GST) on July 1.

“After three consecutive quarters of growth, demand fell by 25% y-o-y to 114.9 trillion in the third quarter (Q2 FY18). The introduction of the 3% Goods and Services Tax (GST) at the beginning of July was a contributing factor,” a report by World Gold Council said on Thursday.

Drop in demand of India’s gold demand brought down global demand as well, which was the lowest since Q3 2009, the report added.

“Jewellery volumes continue to languish below longer-term average levels. Indian weakness was the main reason for the y-o-y decline,” the report said.

Indian consumers thronged jewellery stores before the implementation of GST to stock up on their gold essentials.

Dhanteras that marks the festival of Diwali in India, usually celebrated by buying of gold. Demand for gold surged during the festival however it was still 15% lower than the year ago period.

“As we noted in Gold Demand Trends Q2 2017 (Q1 FY18), a large swathe of Indian consumers had pre-empted the introduction of GST by bringing forward their gold purchases to Q2. This left demand a little flat at the beginning of July,” the report said.

Along with the implementation of the one tax regime, anti-money laundering regulations along with uneven monsoon dampened the demand for gold in India. “This could have a knock-on effect on jewellery demand in these areas over coming quarters, although the effect will be mitigated by aid measures.”

“Our view remains that the market will continue to adapt to GST, allowing demand to recover to a certain extent. Inventory levels in the market are healthy and the removal of the PMLA legislation should encourage demand. But this positive view will likely be tempered by the impact of the uneven monsoon rainfall distribution,” the report added.

GST impacted bullion import in India and ‘in the absence of clarity,’ most banks stopped importing gold on a consignment basis.

Speaking about bar and coin demand the report said, “India – the world’s second largest bar and coin market – was weak. Demand fell 23% to 31 trillion. As explained in the jewellery section, India’s gold market was once again beset by regulatory and tax changes – namely the PMLA and GST – which crimped retail investor activity.”