PM Narendra Modi's first reaction on Lok Sabha election 2019 result out, this is what he tweeted 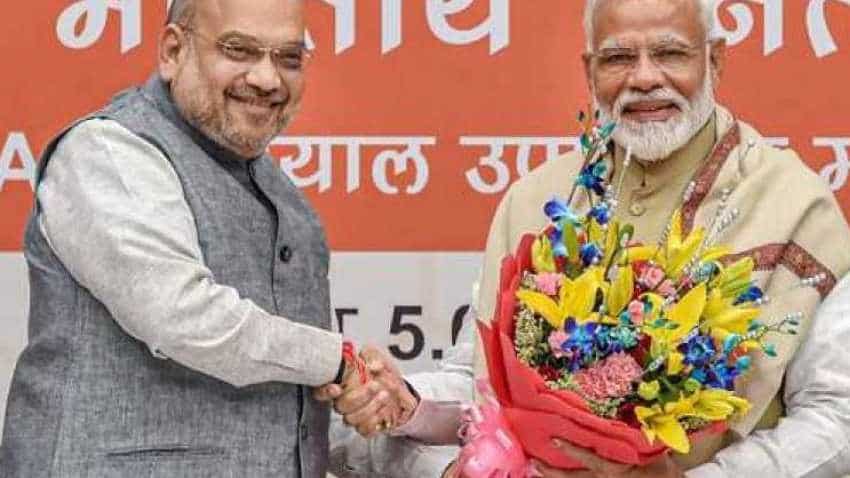 Lok Sabha election 2019 result: Prime Minister Narendra Modi promised to build a strong and inclusive nation on Thursday after the Lok Sabha election 2019 results hinted a clear win for BJP-led National Democratic Alliance (NDA). In his first reaction of the counting day, PM Modi tweeted, "India wins yet again! #VijayiBharat." He stuck to the "Sabka Sath, Sabka Vikas" as it appears that his party is going to win by big margin. The trends so far show that the Lok Sabha elections 2019 results is going to be in the expected line. Earlier, Exit polls conducted by television channels predicted that the saffron party was comfortably going to regain power at the Centre.

"Together we grow. Together we prosper. Together we will build a strong and inclusive India.  India wins yet again! #VijayiBharat," PM Modi tweeted today even as the vote counting were progressing. The prime minister is set to meet BJP workers at 5.30 pm today. BJP Parliamentary board meeting will be held at party office.

Earlier in the day, senior BJP leader and former party president Rajnath Singh had thanked people for showing faith in BJP. "I thank the people of India for once again giving a decisive mandate to @BJP4India led NDA and reposing faith in Shri @narendramodi’s  astute leadership and his vision of New India. Shri Modi is now all set to build a New India," the Union Minister Rajnath tweeted.

"This historic victory in the General Elections is the outcome of Modiji’s visionary leadership, Amit Shahji’s dynamism and the hard work of millions of  BJP karyakartas on the ground," he said in another tweet.

Russian President Vladimir Putin also congratulated Prime Minister Narendra Modi on the convincing victory and expressed his readiness to work together to build up the full range of bilateral relations. "I am convinced that, as the Prime Minister of India, you will further strengthen the centuries-old friendship between our peoples and the all-round development of a particularly privileged strategic partnership between Russia and India," Putin said in a congratulatory message.