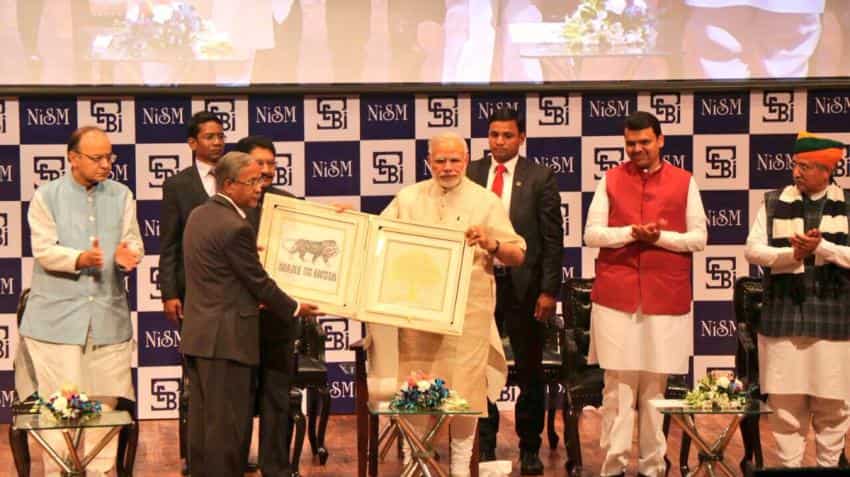 Prime Minister Narendra Modi on Saturday hinted at unleashing more radical reforms, saying his government will not shy away from taking difficult decisions that are in national interest and admitted the note ban caused "short-term pain".

Inaugurating a new educational and training campus of the Sebi-run National Institute of Securities Markets (NISM) in this industrial township near Mumbai, Modi said "the government will unveil more long-term policies that are stable and sound" so as to sustain the higher economic growth rate.

"Our government will continue to follow sound and prudent economic policies and we will not take decisions for short-term political point scoring."

Admitting that the demonetisation drive has caused some "short-term pains" to the public, Modi said this "will bring in benefits in the long-term".

Despite the lingering disagreements between the Centre and the states over the dual control of the Goods and Services Tax (GST) mechanism, Modi expressed hope that the biggest tax reform the nation has seen till date will be a reality shortly.

Claiming he has transformed the economy since assuming office over 30 months ago, the PM said when he took over the economy was in dire straits with high current account and fiscal deficits, near-double digit inflation and low forex reserves.

In spite of all difficulties, he said his government has improved these key metrics massively since assuming office in May 2014 and today the country is a bright spot in otherwise a gloomy global environment.

Even as the whole world is fighting a prolonged slowdown, "India is being seen as a bright spot with growth projected to be highest amongst the large economies," he said.

Modi said advancing budget presentation will help improve productivity by ensuring adequate resources to all productive sectors of the economy.

Lauding Sebi for facilitating a large number of initial public offerings (IPOs) this year and helping the capital markets to grow, he said the financial markets are very important for a fast-growing economy.

He underlined the need for developing a robust corporate bond markets so that banks funds can be utilised for other less organised sectors.

Modi asked market watchdog Sebi and Finance Ministry to enable municipalities to tap markets. Stock markets should help in raising capital for productive purposes while the bond market could become a source of long-term infra finance.